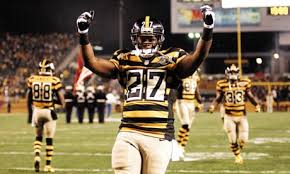 There is no savior. He isn’t Le’veon Bell and he isn’t Max Starks. No single person can suddenly make this team, or should I say ‘offense,’ just start clicking. It’s going to take a group effort of epic proportions.

After last week’s debacle (I can’t get off of that word for some reason) the Steelers were forced to get on the phone to Jonathan Dwyer who they cut two weeks ago despite being the team’s leader rusher from last season and in this year’s preseason.

I argued on the Blitz podcast last night that the Steelers were probably on the phone with Dwyer before Isaac Redman’s first fumble hit the ground. There’s no doubt they were hitting re-dial once LaRod Stephens-Howling was lost for the season as well.

Over the last 48 hours, I’ve seen no end to the “We need Dwyer back” and “We should have never cut Dwyer in the first place” tweets. Frankly, I have to wonder what is it about Dwyer that makes people think his presence will so drastically improve the fortunes of this team after week one?

The unfair knock on Dwyer was that he fumbled twice in the preseason and was therefore a fumbler. It was unfair because compared to Isaac Redman and Felix Jones he fumbled far less in his career.

The one area I did find fault with Dwyer was his penchant for not taking what was given. He too often tries to stretch plays to the outside and misreads down-field blocks about as bad as anyone. This is not what the offense needs. It needs a guy who will take the two or three yards by plowing forward.

After re-watching the game, with a bottle of Pepto-Bismol I might add, the blocking on the edges is not good. I thought Mike Adams had decent game while Marcus Gilbert did very little to be happy with but they weren’t the whole story. Tight ends David Paulson and David Johnson were completely ineffective in creating lanes for the running backs on Sunday.

Dwyer is not the type of back who is suddenly going to make those problems disappear. Will Dwyer be a step up from what we saw on Sunday? I expect that he will be despite the fact that Mike Tomlin said today that Isaac Redman will get the start.

Any total over 50 yards for Dwyer on Monday night would be a success based upon what happened against Tennessee, but make no mistake about this people, Dwyer is not going to save this season. They wouldn’t have cut him in the first place had they thought he could.

Reasons Why Ben Roethlisberger Was Late to Practice Today

The only RB that could produce behind this HORRIBLE O-LINE is Barry Sanders. Untill that gets fox’s it won’t matter who’s runnin it. Steelers really meed to think about trading a few draft picks to get some PROVEN vets..Hell maybe a pro bowler or 2 who can actually open up a hole and not get manhandled and end up on the ground. Also they need to pass more to open up the run..not vise versa. Spread the field..slow the other teams blitz And RUN MORE NO HUDDLE PLEASE! why wait till the 4th quarter and their DowN..when it CLEARLY WORKS (Another Question for Todd Haley)

First thing, this line can’t block it’s not even a question. Second thing, the offense is predicable and very simple to defend. Third thing, the Steelers unwillingness to see these things only compounds them. Forth thing, if Issac Redman were on any other team in the NFL he would either be cut or in the dog-house. A quote from Tomlin HIMSELF” we expect Redman to answer the the call in a big way ” . Well you don’t know what you are talking about. There is some talent on this roster there just isn’t any quality coaching. Until the problems with the offense is fix you can bet that you will see a repeat performance.