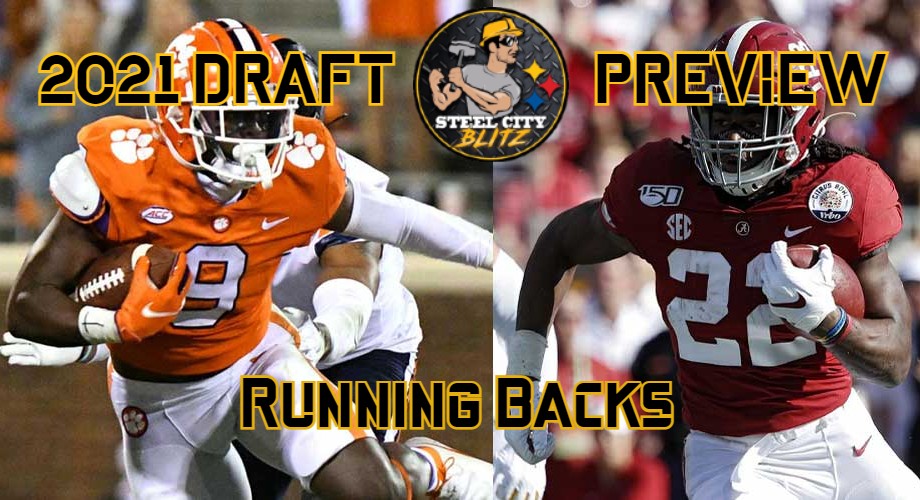 Check out our Prospect Profiles on some specific prospects in the 2021 Draft class. Our positional Draft Preview series continues today with a look at Running Backs. Check out the previous previews:

With James Conner recently signing in free agency with the Cardinals, the Steelers arguably have the worst backfield in the league. While drafting a running back in the first round is not the most efficient use of draft resources, the Steelers absolutely need to add a starting-caliber back in this draft. Historically, the second and third rounds (specifically picks 35-75) have yielded an excellent combination of talent and value at the running back position. They have heavily scouted both Alabama’s Najee Harris and Clemson’s Travis Etienne with Kevin Colbert and Mike Tomlin attending both Pro Days.

Given how extensively the Steelers have scouted this running back class, and the significant need to add to the depth chart, it is almost guaranteed that the Steelers will select a running back at some point in the draft. The need here is so high that the possibility exists they could even take two backs – one early and one late. They have employed this strategy at other positions previously as well.

Harris is clearly the top back in the class but will be 23 years old on Draft Day and the Steelers have chosen just one player older than 22 in the first round since 2003. Etienne has game-breaking speed the likes of which the Steelers have not had since Willie Parker. North Carolina’s Javonte Williams is a borderline first round back who might be the one in the class best suited to an outside zone rushing scheme. Colbert and Tomlin were also in attendance at Ohio State’s Pro Day where they had extensive conversations with Trey Sermon who came on strong towards the end of 2020. Memphis’ Kenneth Gainwell is another name to watch on Day 2, depending on how the draft board falls. The Steelers have also had meetings with later round guys like Oregon State’s Jemar Jefferson and Oklahoma State’s Chuba Hubbard. They also saw players like Mississippi State’s Kylin Hill and Virginia Tech’s Khalil Herbert at the Senior Bowl.