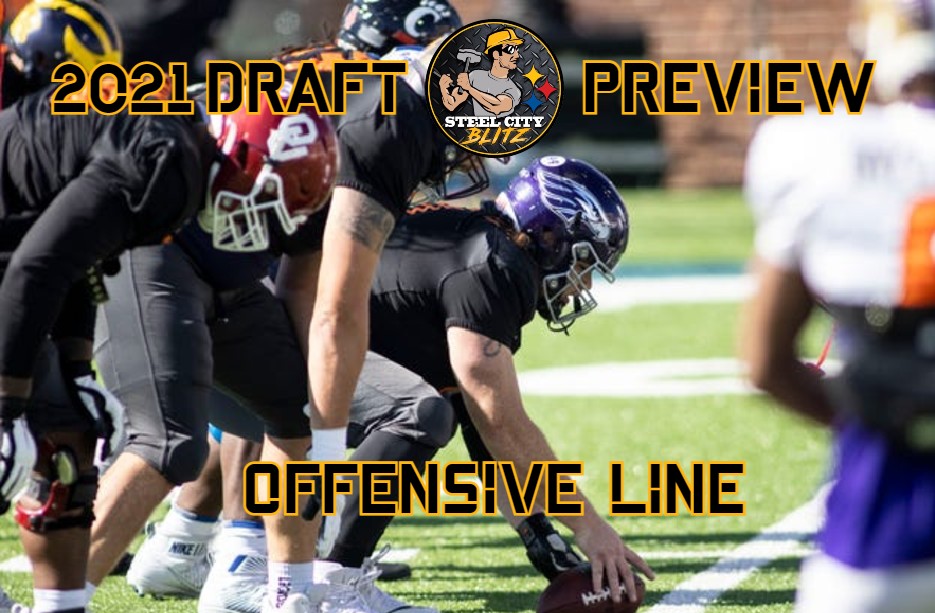 Check out our Prospect Profiles on some specific prospects in the 2021 Draft class. Our positional Draft Preview series continues today, wrapping up the offense with a look at the line. Check out the previous previews:

The offseason began with the retirement of Maurkice Pouncey. Matt Feiler departed in free agency. The Steelers did re-sign Zach Banner as he works through a comeback from an early-season ACL injury. With Kevin Dotson assumed to step in at left guard, the biggest questions on the line are at center and left tackle. In free agency, the Steelers seemed to focus on signing players who were best suited as guards, bringing back BJ Finney and signing Joe Haeg and Rashaad Coward. Finney and JC Hassenauer are capable of playing center, but neither are a long-term solution at the position and are better at guard. The Steelers need a current starter at center, and there are a few players in this draft capable of stepping in almost right away. With Zach Banner coming back from injury and Chuks Okorafor having just one year left on his contract, the Steelers also need a starter at left tackle, and potentially future starters at both tackle positions.

The Steelers should invest at least one pick (and possibly two picks) within the first three rounds into the offensive line. They need a center and tackle and the best places to find those two positions tend to be early in the draft. Even if the Steelers don’t use 2 of their first 3 picks on linemen, this draft class needs to yield at least 2 linemen for depth – preferably a center and a tackle as the Steelers seem to have stocked the guard position in free agency.

Much to the chagrin of Steelers Twitter, the team brass did not attend the Pro Days of some of the top tackles in the draft like Virginia Tech’s Christian Darrisaw, Oklahoma State’s Teven Jenkins, or Texas’ Samuel Cosmi. Kevin Colbert and Mike Tomlin did attend Pro Days at Michigan, Alabama, and Notre Dame who all have tackles projected as early 2nd rounders (Jalen Mayfield, Alex Leatherwood, and Liam Eichenberg). All three of those may project better as guards than tackles. The Steelers did spend some time scouting mid-round tackles like North Dakota State’s Dillon Radunz, Northern Iowa’s Spencer Brown, Cincinnati’s James Hudson, and Western Michigan’s Jaylon Moore. On the inside, the top centers in the draft look like early Round 2 prospects. Oklahoma’s Creed Humphrey tested through the roof athletically and might be worth a first round pick, but the Steelers did not heavily attend his Pro Day. Alabama’s Landon Dickerson is a solid technician but has a series of concerning injuries. Wisconsin-Whitewater’s Quinn Meinerz turned heads with a massive performance at the Senior Bowl and is definitely a Day 2 pick. Ohio State’s Josh Myers could also be a Day 2 pick. If the Steelers don’t land a center in the first three rounds, Penn State’s Michael Menet could be in play as a late Day 3 pick.