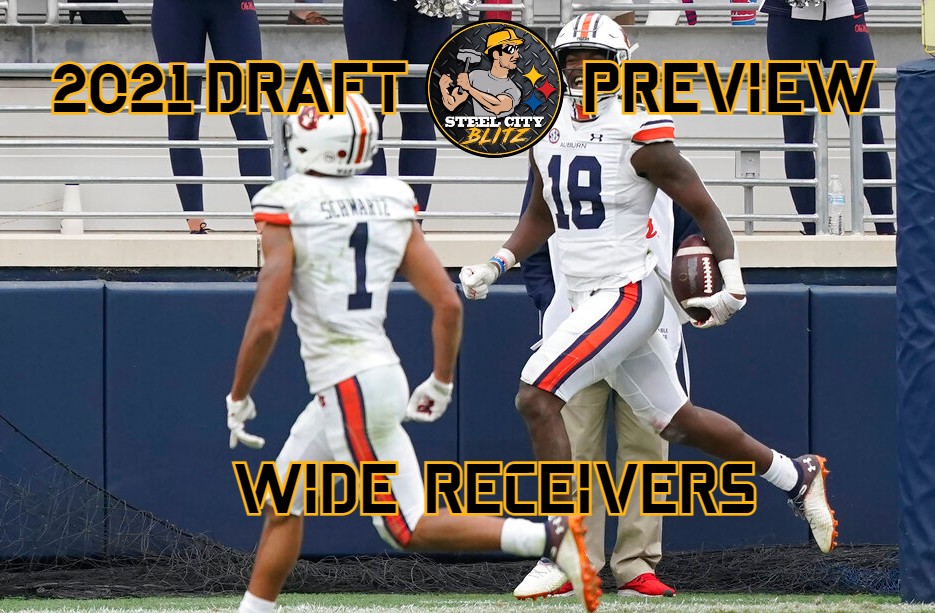 Check out our Prospect Profiles on some specific prospects in the 2021 Draft class. Our positional Draft Preview series continues today with a look at Wide Receivers. Check out the previous previews:

The Steelers return their top five wide receivers from last season. Chase Claypool, entering his second year, will be asked to take a big step forward on the outside. Diontae Johnson needs to work on his hands but has the talent to be a quality #2 option. JuJu Smith-Schuster moved into the slot last year and was asked to run a lot more underneath routes, but still led the team in receptions and touchdowns. James Washington was the top backup on the outside and can do whatever is asked of him and outside of JuJu has the best hands of the group. Ray-Ray McCloud may take on a bigger role in the offense this season with more looks on jet sweep actions with Matt Canada at the helm. McCloud also proved his worth as a kick returner last season. The Steelers signed Tyler Simmons and Mathew Sexton as free agents after seeing them work at their Pro Days. Even with all this depth, both JuJu and James Washington are entering the last year of their contracts, so some future depth is needed for the position beyond the 2021 season.

If we have learned one thing about the Steelers drafts over the years, it is to never discount this team from drafting a wide receiver. The only thing I can say with certainty is that it won’t be in Round 1, but if a player they have graded highly slips to them (like JuJu did), they will not be afraid to pull the trigger. That said, this is one of the deepest receiving corps in the league and bringing back their top five from last season mitigates the need to use an early pick on a wide receiver.

The Steelers have spent some time on mid-round wide receivers in this draft class. Wide receivers coach Ike Hilliard accompanied Kevin Colbert and Mike Tomlin to Auburn’s Pro Day where speedsters Anthony Schwartz and Seth Williams worked out. Additionally, Matt Canada went with Colbert and Tomlin to Clemson’s Pro Day where Amari Rodgers and Cornell Powell tested. Michigan’s Nico Collins has an enviable combination of size and speed, similar to Tee Higgins and DeVante Parker (but unfortunately had terrible QB play his entire career). The Steelers also reportedly met with Western Michigan’s D’Wayne Eskridge a shifty and speedy slot guy. The Steelers seem to love receivers out of the MAC, so don’t discount Kent State’s Isaiah McKoy in the later rounds.

The return of Plax will help ease...