Where To Find Quality Offensive Linemen in the Draft 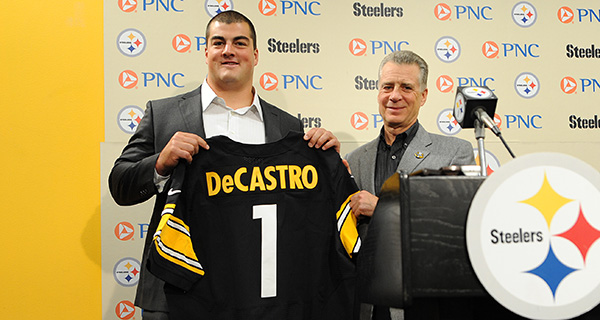 With less than a month to go until the 2021 NFL Draft, the Steelers still have some significant needs to address along the offensive line. Zach Banner, who won the right tackle spot in camp last year but suffered a season-ending injury in Week 1, was re-signed to a 2-year contract. Former 3rd round pick Chuks Okorafor started most of the season at right tackle and could slide over to left tackle to replace Alejandro Villanueva, who remains unsigned as an unrestricted free agent. Maurkice Pouncey’s retirement has also left a hole at center. The Steelers did sign free agents BJ Finney, Joe Haeg, and Rashaad Coward for depth along the line. That said, as we look forward to the 2021 NFL Draft, it is worth the time to take a deep dive on where teams have found quality offensive linemen in the Draft.

In the last 10 years there have been 415 offensive linemen selected in the NFL Draft. Of those, only 15 (3.6%) have been selected as First Team All-Pros and 32 (7.7%) have been elected to the Pro Bowl. Additionally, only slightly more than half of the linemen selected (221 of 415, 53.3%) became starters for at least one season. Less than 40% (165 of 415) went on to become starters for a majority of their careers. However, these rates of career success are not consistent across draft round, and as can be expected have diminishing returns deeper into the draft.

Where Successful Linemen Are Drafted

This will likely come as no surprise, but the best place to draft successful linemen is in the first round. Over the last 10 years, an average of 6 linemen per year were selected in the first round. Of the 61 first round picks, 10 went on to be First Team All-Pros. While this 16.4% rate of finding an elite lineman might seem low, consider that this is two-thirds of all of the All-Pro linemen drafted in the last decade. Two second-round picks went on to become All-Pros. After that, just 3 players over the final five rounds of the draft became All-Pros.

When the criteria is changed from All-Pros to Pro Bowlers, the results are still weighted heavily towards the first two days of the draft. Of the 32 players that went on to make a Pro Bowl, more than half (18) were first-round picks. The second day of the draft accounted for nearly a third of the Pro Bowlers with 5 each from the second and third rounds. The third day of the draft, rounds 4-7, produced just 4 Pro Bowlers in total.

Of the 160 starting linemen across the league in 2020 (or those that would have been starters if not for injury), a vast majority came from the early rounds of the draft. Interestingly, tackle and center were heavily weighted towards the first two rounds while starting guards were relatively evenly distributed over the first four rounds. The one outlier is that the third-most popular round for starting centers is the 6th round, the only Day 3 round that holds that distinction for any offensive line position. 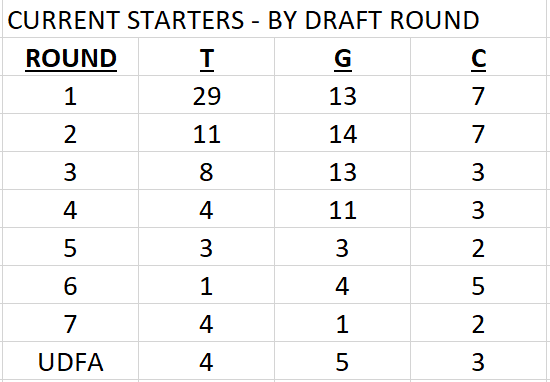 Of the 160 starters in 2020, 90 are still with the original team that drafted them while 70 were signed either as free agents, acquired via trade, or signed as undrafted free agents. All 3 starting centers that were UDFAs are still with their original team. A handful of guards and tackles have been acquired via trades but the primary sources for those positions are either the draft or free agency. At center, it is nearly an even split with 15 centers on the original team that drafted them (plus the 3 UDFAs) and 14 having been acquired through free agency. 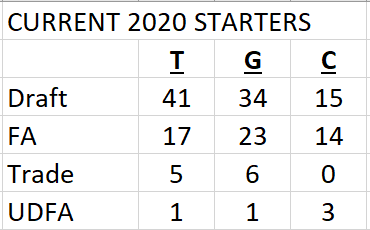 For the 90 starters that are still with the team that drafted them, more than a third (34) were first round picks. A majority of tackles (22 of 41 acquired via the draft) were first round picks. That was the highest percentage of any position in any round. Day 2 tackles accounted for another 15 of the 41 drafted current starters and Day 3 picks made up just 4. This distribution is consistent with the other data where a majority of tackles came from the first round and another significant amount on Day 2 of the draft. For guards, the distribution was more variable. Only 7 of the 34 starting guards that are with their drafting team were first round picks. That number was eclipsed by guards selected on Day 2 of the draft (10 from the 2nd round and 8 from the 3rd round). Furthermore, the 4th round produced 6 of the current starting guards, giving further proof that starter-caliber guards can be found deeper into the draft than tackles or centers. Starting centers heavily favored the first two days of the draft. 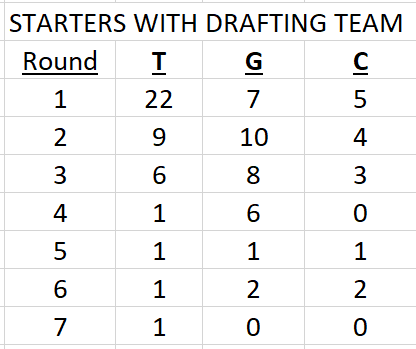 Unlike other positions we have studied previously (like running back), there is a definitive drop-off in quality of offensive linemen as the draft progresses. As we saw with the data on All-Pros and Pro Bowlers, the first round definitively is the place to find elite talent. In particular, draft offensive tackles early in the draft seems to be the best strategy. Nearly half (29 of 64) of the current starting tackles in the league were first round picks. Additionally, of the 15  tackles drafted in the last decade that were selected to at least one Pro Bowl, 10 were first round picks. Spending first round picks on offensive tackles is certainly a worthwhile investment.

At the interior positions on the offensive line, elite talent can be had in the first round but there is more starter-capable depth deeper in the draft. The truly elite All-Pro level guards tend to be first round picks but there were an equal number of Day 2 guards selected to Pro Bowls as there were first round guards. Additionally, guard had the highest percentage of current starters who were selected after the first three rounds (24 of 64 (37.5%) were either Day 3 picks or UDFAs). While it is not as essential to get a center in the first round as it is for tackle, the position is weighted towards the first two days of the draft. More than half of the current starting centers were taken in the first three rounds, and all but one of the Pro Bowlers drafted in the last decade were picked in the first two days.

Interestingly, in the past the Steelers have employed the inverse of this strategy and certainly been an outlier league-wide. The Steelers used first round picks on interior linemen in 2010 (Pouncey) and 2013 (DeCastro) to great success. DeCastro was a first-team All-Pro twice and a six-time Pro Bowler. Maurkice Pouncey retired after a Hall of Fame-worthy career where he was a first-team All-Pro twice and a nine-time Pro Bowler. Prior to those two, the Steelers had used first round picks on guards in 2002 (Kendall Simmons) and 1998 (Hall of Famer Alan Faneca). The Steelers have not used a first round pick on an offensive tackle since the 1990s when they took Jamain Stephens in the first round in 1996 and Leon Searcy in 1992. In Kevin Colbert’s tenure of 21 drafts since 2000, the Steelers have used just 7 Day 2 picks (2nd and 3rd round) on offensive linemen – all of them tackles. Offensive tackle is the only position that Kevin Colbert has never selected in the first round.