We all know the loss of Mike Hilton, to the Bengals of all people, is a vital blow to how the Pittsburgh Steelers do things defensively. Replacing the skills he possess is not always as easy as just inserting the “the next man” either. Let’s face it; nickel cornerback is a starting position on almost every NFL team now. As teams continue to use more and more 11 personnel as their base offenses the need for cornerbacks is greater than ever. With Steven Nelson gone, we can only assume that Cam Sutton will move to that boundary. He has the ability to play nickel but I don’t believe he does it as well as Hilton did. What I’m getting at is that the Steelers have to find a new nickel CB. I found Hilton to be an average player in coverage but an exceptional player when it came to tackling and rushing the quarterback. Sutton is the exact opposite. All of this in mind, my curiosity is at an extreme high in terms of the type of cornerback the Steelers may draft. Don’t be surprised if they look for a true nickel corner in three weeks.

We recorded episode 216 of the SCB Steelers Podcast presented by DEK Roofing of South Florida. Our focus was the offensive side of the ball. We looked at all of the potential Steelers’ targets at each position and we also discussed the inevitable “quarterback” question. Grab a beverage and join us!

I will never understand the fascination with the British Royal Family.
Incidentally, 99 is a good, long life. Good for him.

It used to be that as a college prospect you either went to the Combine (if invited) and you had your Pro Day. With no Combine this year, some colleges are hosting a second Pro Day. Alabama did it and now the Ohio State Buckeyes are doing the same. Justin Fields will get one more opportunity to impress teams that may not have seen him up close the first time. This is another example of what a weird year this has been.

The Draft Starts at 4.

With the Niners trading up to the third spot, I feel confident in saying that three straight QBs will be taken at the top. The Falcons have the fourth pick and there is debate within their organization about what to do with it. Allow me to be blunt Steelers’ fans; the Steelers aren’t trading up there for a QB. In order to do that it would take a monumental amount of draft collateral to do it. The Steelers have WAY too many needs to move up for a QB that likely won’t play in his first season. 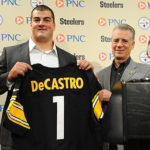 Where To Find Quality Offensive Linemen in the Draft

With Mini-Camp in the Past, Steelers Brace...