Is Drafting a First Round Running Back Worth It? 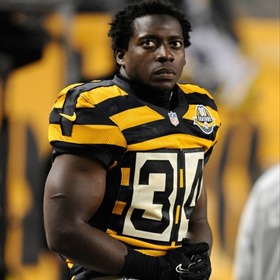 With about two months until the NFL Draft, conversations about how the Steelers should use their first round pick are heading up. With Maurkice Pouncey’s retirement there is significant talk around the top centers in the class including Creed Humphrey and Landon Dickerson. With the pending free agency of Alejandro Villanueva, the Steelers will likely also be in the market for an offensive tackle. One of the common trends in the discussion of the Steelers draft picks revolves around the running back position. Steelers fans have become increasingly enamored with Alabama’s Najee Harris and shouldn’t forget about Clemson’s Travis Etienne. With the discussions emerging around the running back position, I took a look at where teams have been able to find successful running backs.

To start, we should look at the Steelers depth chart to see if the answer is already on the roster. James Conner is set to hit free agency, and reports are that the Steelers will let him test the market. The remaining backs on the depth chart are Benny Snell, Jaylen Samuels, and Anthony McFarland. To maximize success in today’s NFL, having a running back that can run inside and out, block, and catch is ideal. None of the three backs on the roster can do all of those things. The Steelers will need to look outside the organization for their starting running back in 2021.

Running back, possibly more than any other position in the NFL, has had an increasingly short shelf life. Additionally, even the top backs in the league rarely play all 16 games in a season. It is almost a given that a team will start multiple players at running back during the year. In 2020, only 2 players (Derrick Henry and Devin Singletary) started all 16 games at running back. A handful more were active for all 16 games but not the primary starter for their teams. In 2019 that number was slightly higher with 6 players (Ezekiel Elliott, Nick Chubb, Christian McCaffrey, Aaron Jones,  Phillip Lindsay, and Joe Mixon) starting all 16 games for their teams. Nevertheless, over the last two seasons only 8 of the 64 starting running backs (12.5%) started all 16 games.

Given that a vast majority of starting backs don’t play in all 16 games, I decided to look at those that finished in the Top 20 in the league in rushing yards each of the last two seasons. This list was essentially the players that ran for more than 800 yards in 2019 and the players that ran for more than 700 in 2020. Due to more injuries occurring in 2020, the rushing totals for the top backs were lower than the year prior. Only 8 backs finished with over 1000 yards in 2020 while nearly double (15) had 1000-yard seasons in 2019. In total, 32 players comprised the Top 20 RB list as there were 8 duplicates. There are some common factors between these 40 that immediately jump off the page.

Youth is the name of the game for running backs. It is rare that a running back will find continued, sustained success after they pass their mid-20s. This is often used in cases against signing running backs to massive long-term contracts. The data from the last two seasons bears this out. Of the Top 20 rushers from the last two seasons, 33 of the 40 were 25 years old or younger. In fact, 25 seemed to be the peak with 12 of the 40 top seasons coming from 35-year old backs. 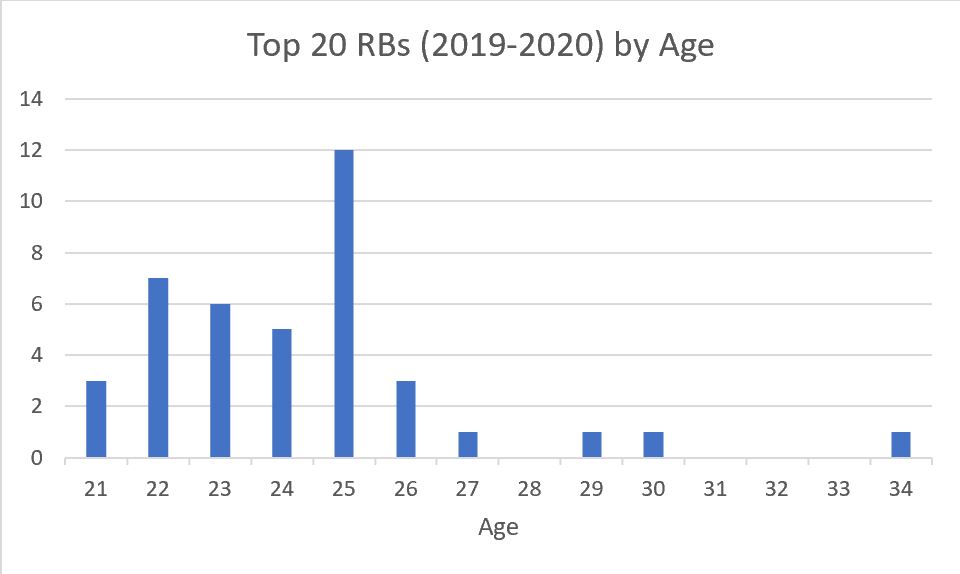 The dropoff after a running back’s Age 25 season was significant. Just 3 26-year olds finished in the Top 20 over the last two years and only 4 players over 26 finished among the top backs in the league. Those 4 players were 34-year old Adrian Peterson (in 2019), 30-year old Mark Ingram (in 2019), 29-year old Carlos Hyde (in 2019), and 27-year old Melvin Gordon (in 2020). With so many young running backs having success over the last two years, this supports the notion of “not paying running backs” when they reach the end of their rookie deal.

As can be expected with so many young backs having success, a vast majority of the league’s top rushers over the last two seasons were n their rookie contracts. In fact, 27 of 40 (67%) were playing on their rookie deals. One other (Gus Edwards) was playing on a Restricted Free Agent tag. Six of the players were on a second contract. Only Ezekiel Elliott has cracked the Top 20 in both of the last two seasons on his second contract. In addition to Zeke, the other “Second Contract” players all finished in the Top 20 in the first year of their new deal. 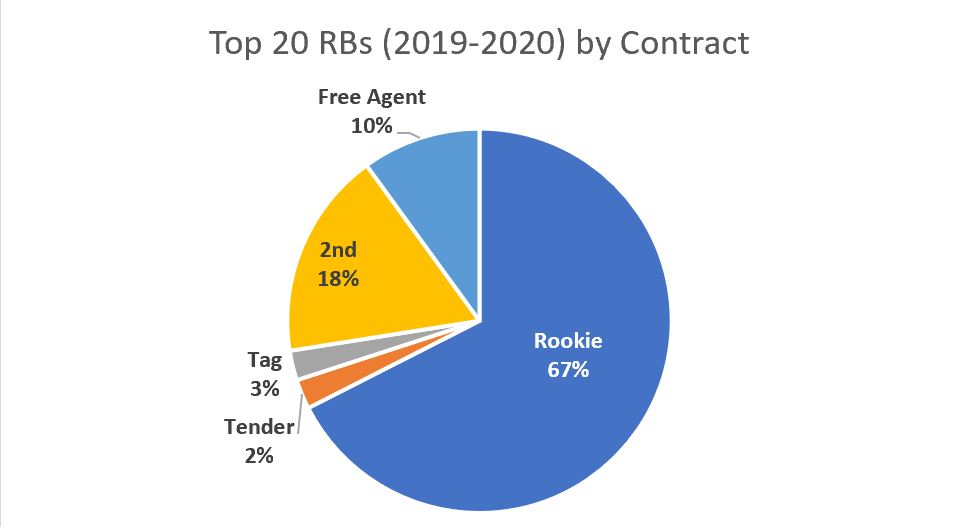 This gives more support to the “Don’t Pay Running Backs” side of the debate. The free agent signees that reached the success plateau were the aforementioned foursome of Peterson, Ingram, Hyde, and Gordon. On the whole, two-thirds of the players that finished in the Top 20 in rushing in 2019 and 2020 were on their rookie deals. This fact further supports the notion of investing in young running backs during the draft.

Where Were They Drafted?

Now we come to the question facing the 2021 Pittsburgh Steelers. Where is the best place to find a running back in the draft? Given that running backs tend to have a shelf life of around five years and see a fairly significant dropoff afterwards, the investment of a high draft pick in a running back can be a risky proposition. Of the Top 20 rushers from the last two years, 13 came from both the first and second rounds. The vast majority came on the first two days of the Draft (Rounds 1-3). Interestingly, more Undrafted Free Agents (3) reached the Top 20 in rushing yards over the last two years than from any of the Day 3 draft rounds. 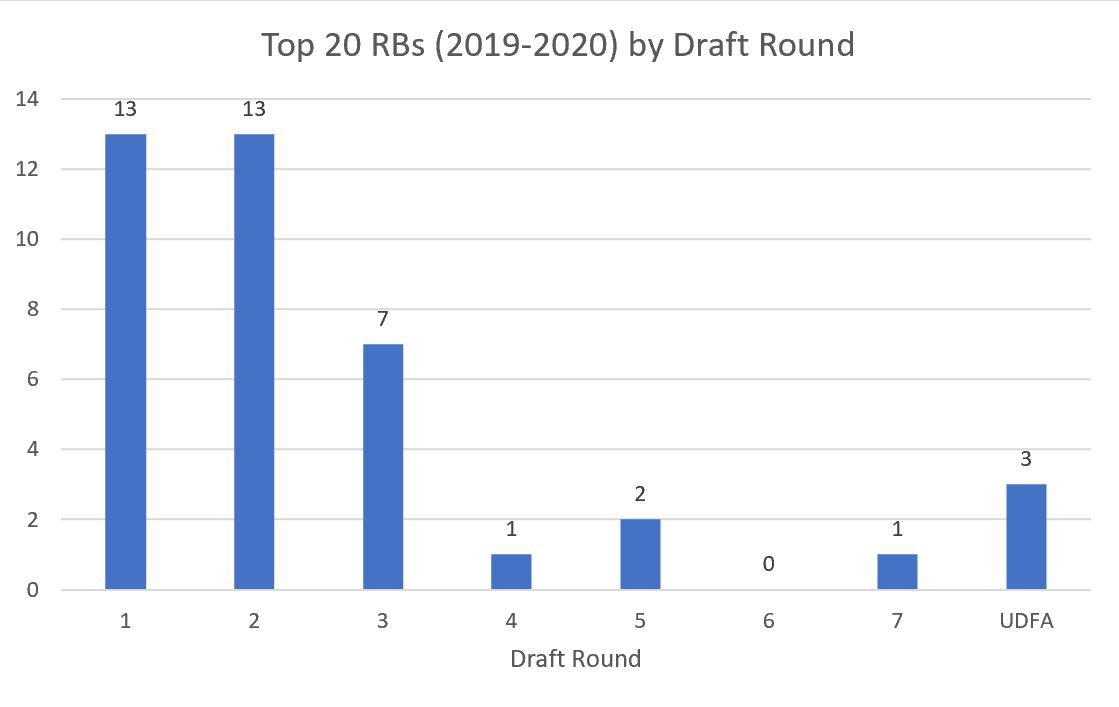 The first rounders can be broken down relatively evenly between those in the Top 10 (Saquon Barkley, Ezekiel Elliott, Leonard Fournette, Adrian Peterson, Christian McCaffrey, Todd Gurley) and those in the rest of the round (Melvin Gordon, Josh Jacobs, Sony Michel, Mark Ingram, Clyde Edwards-Hellaire). Interestingly, there were 6 players that were Top 10 picks that were “successful” over the last two seasons and there were also 6 players drafted in the first half of the second round that reached the threshold of success. Those 6 were Nick Chubb, Ronald Jones, Dalvin Cook, Jonathan Taylor, Derrick Henry, and Joe Mixon. If you stacked up the 6 Top 10 picks against the 6 second-rounders, it would be hard not to say that the second-round group is at least comparable if not better.

Where Should a Running Back be Drafted?

Given the weight of the investment of a first-round pick, and ideally a team wants that player to become an anchor for a long time, it is not worth taking a running back in the first round. In fact, between picks 50 and 75 (the end of the 2nd round through the beginning of the 3rd round) seven more quality backs were taken – Miles Sanders, JK Dobbins, Carlos Hyde, Antonio Gibson, Alvin Kamara, David Montgomery, Kenyan Drake. This seems to denote a “sweet spot” for where to target a running back in the draft – between the end of the first round and the middle of the third round. Here is a look at the running backs taken between picks 33 and 75 over the last five drafts. 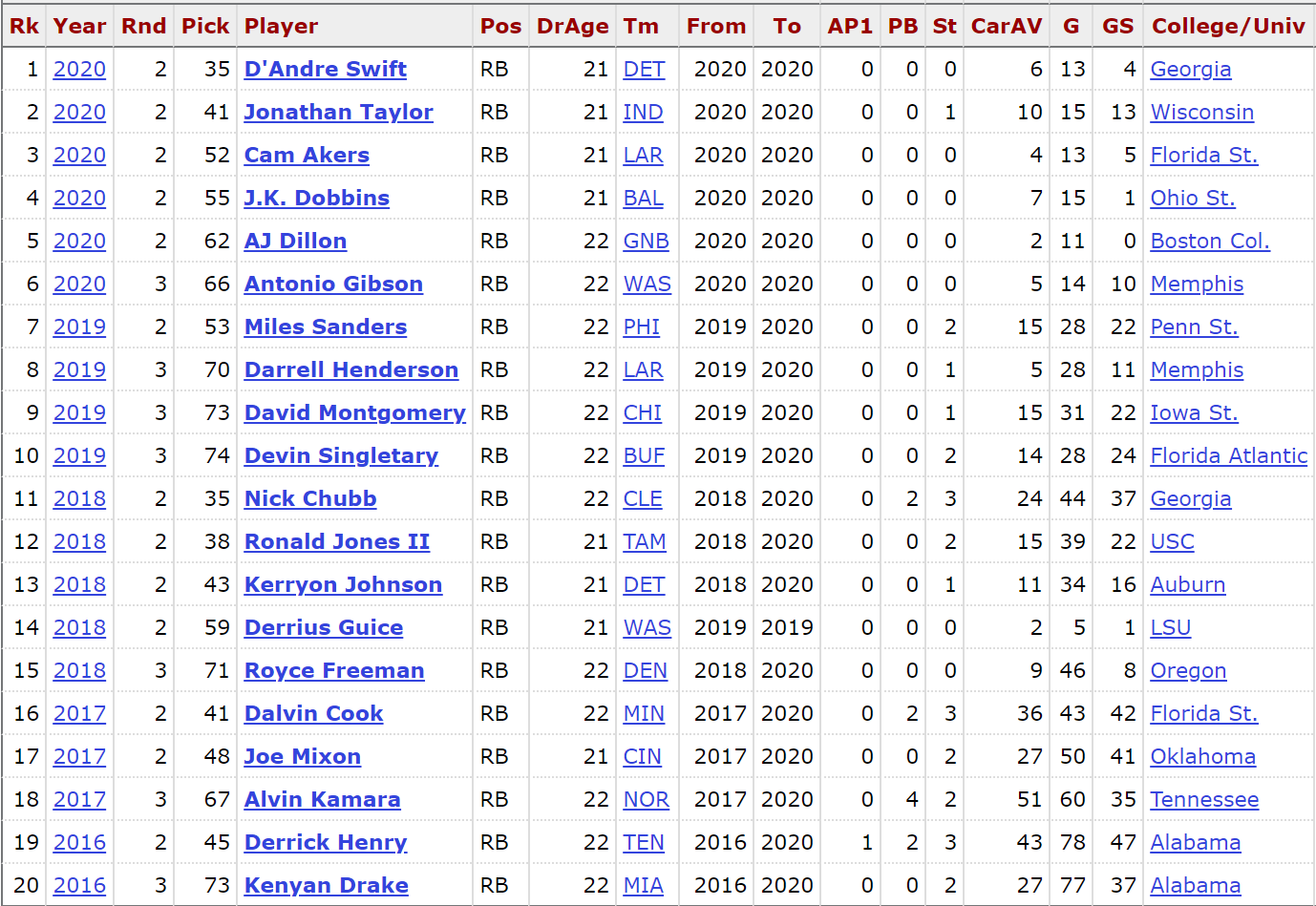 Other than Derrius Guice, who had a combination of injuries and off-field issues, it is hard to say that any of these picks was a complete “miss.” The success rate of hitting on a quality running back between picks 33 and 75 is high. This would seem to be the ideal spot to draft a running back. Using a first round pick on a player who will likely burn out before playing more than a year or two into a second contract, especially at a position where only 12.5% of the players are starting all 16 games, seems like an incredibly short-sighted investment.

Would  This Strategy Work for the Steelers?

Given the depth of talent available in later rounds of the draft at the running back position means that a team does not have to spend a first round pick on a running back. The ideal scenario for the Steelers would be to take an offensive lineman in the first round and then a starting-caliber running back in the second or third round. This would likely mean not landing Najee Harris or Travis Etienne, but there will be plenty of other good running backs available later in the draft that will be able to come in and contribute to the offensive attack.

SCB Steelers Podcast 210 – Is Seven Back for Another Go?