Reasons Why Ben Roethlisberger Was Late to Practice Today 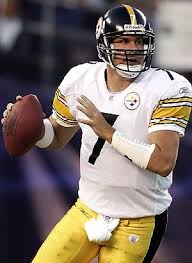 Several Steelers’ beat writers tweeted out today that Pittsburgh Steelers’ quarterback Ben Roethlisberger was not at practice today. He was excused due ‘personal reasons’ but I think there is much more to this story.

(He arrived for the final 30 minutes according to several sources)

I have this boiled down to a few reasons why the 10th-year QB would miss practice coming off such an embarrassing loss. See if you’re on board with me here while I hash these ideas out.

2. He’s been put in charge of finding a song to replace ‘Renegade.’

3. He’s being fitted for a full body cast.

4. He’s in Arizona asking to switch places with Carson Palmer.

6. Taking survey of other QBs on what it’s like to have time to throw.

7. Partnership with Nike allowed him to play golf with Tiger Woods today only.

9. Meeting with Art Rooney, Jr to ask question, “THIS is how you want me to tweak my game?”

10. Stayed home to watch ‘Shark Week’ re-runs because Haley wouldn’t shut up the whole time they watched together.

The above was an attempt at humor. After the debacle on Sunday, it’s all I have left right now.

When Commenting on the Steelers, Honesty Helps