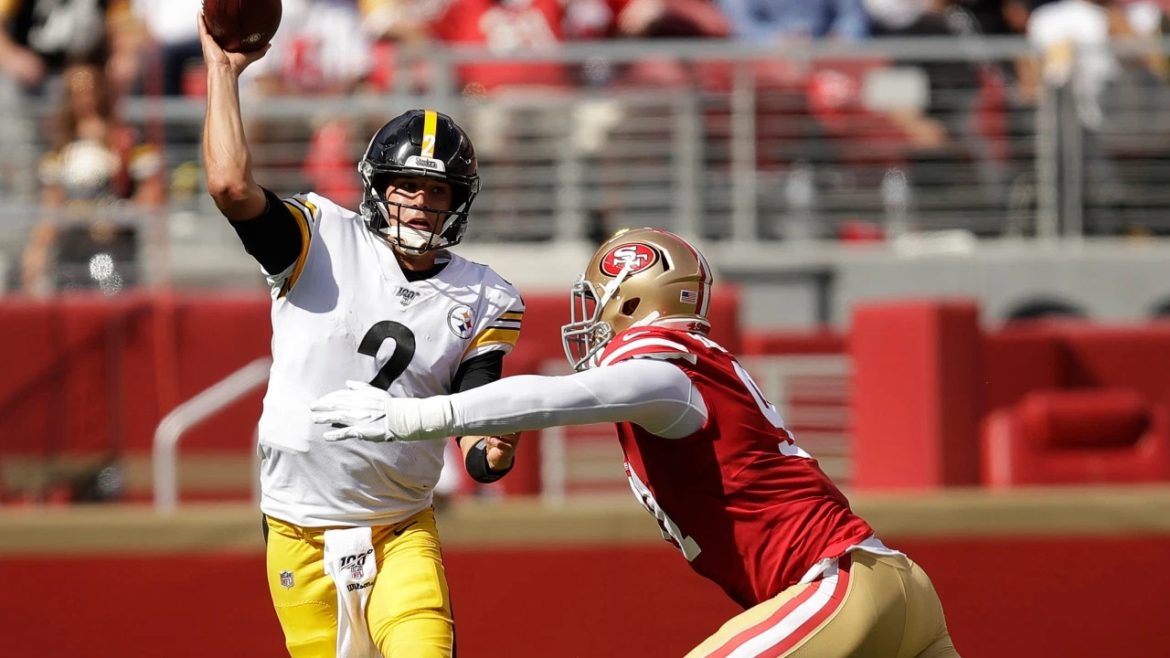 Mason Rudolph’s first start featured two touchdown passes but also a number of check-downs and short throws. Was this Rudolph simply executing the game plan or did he miss open receivers down the field? Looking at Rudolph’s passing chart it looks like the Steelers came out with one of their frustrating road game plans that featured a minimal amount of downfield passing. Only 7 of Rudolph’s 27 attempts went more than 10 yards and only 5 were more than 15 yards downfield. Rudolph’s only two completions more than two yards past the line of scrimmage went for touchdowns. Additionally, James Washington drew a defensive pass interference call on another deep ball. 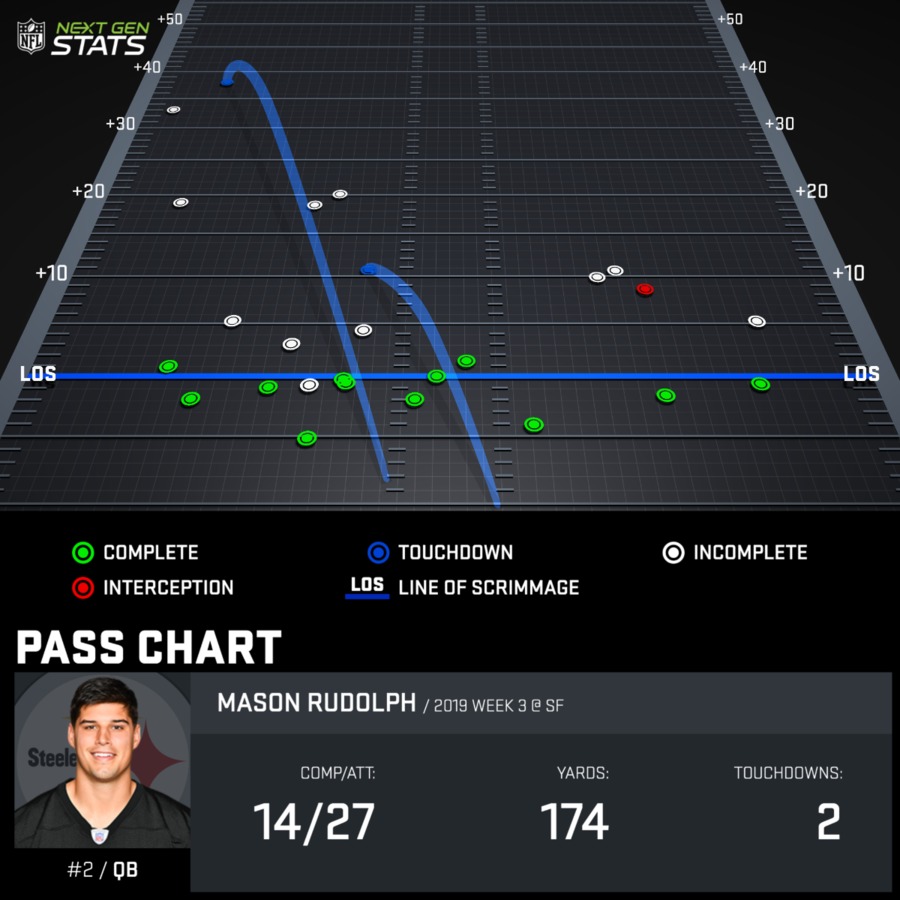 Was the gameplan too conservative or did Rudolph make bad decisions? After watching the film, it was a little of both. The 49ers defensively stacked the box to take away the run game and played press coverage on the outside receivers. San Francisco was willing to give up the deep ball and the Steelers did not take advantage. This was also a much more conservative passing chart than what Rudolph displayed the prior week against Seattle when he came in at halftime.

Rudolph had 27 attempts against San Francisco and just 19 against Seattle. Despite 8 fewer passes against the Seahawks, he had the same number of pass attempts beyond 10 yards (7) and beyond 15 yards (5). In order to determine if the blame should lie more on the coaches (play calls) or on Rudolph (decision-making), here is a look at each Steelers drive against the 49ers.

The Steelers got the ball on the edge of field goal range after the defense produced a turnover. After a check-down to Conner on first down, Randy Fichtner called two wide receiver screens. The second and third down play calls did not even give Rudolph the opportunity to throw down the field as the only routes available were all around the line of scrimmage. The second drive was another three-and-out. After two runs, Rudolph missed Diontae Johnson on a slant route on 3rd down. Rudolph’s only pass on this drive was a bad throw.

The third drive started like the first, with a defensive turnover giving Rudolph the ball in 49ers territory. After yet another wide receiver screen that Washington was able to get 8 yards on, Conner converted the 2nd and 2 to get the ball inside the 15. Rudolph did take a shot for the end zone on the next play but overthrew JuJu. After a 2nd down screen pass to Conner, the Steelers went play-action on 3rd down that fooled no one. The 49ers 4-man rush got pressure and Rudolph was forced to step up and try to run but was brought down for a minimal gain. The defense blanketed the Steelers receivers (who all ran routes into the end zone) and no one was open. After two of the first three drives starting in plus territory, the Steelers only threw once to the end zone and came away with only 6 points.

The next two Steelers drives started with turnovers produced by the defense in the red zone. Conservative play calls with their backs against the goal line included a tight end screen a dump-off to Conner, and a dropped pass by Grimble. Once the Steelers got some breathing room they tried a pass down the field to Vance but Rudolph overthrew him. Rudolph also missed a 3rd down out-route to Diontae Johnson right at the sticks on one drive and was forced to scramble on the other due to good coverage.

The Steelers would finally convert a 3rd down on their sixth drive of the day. On 3rd and 7 Rudolph threw a shallow cross to Johnson and he made two guys miss in the open field to scamper past the sticks. Rudolph picked up another third down on the same drive by scrambling for a first down. After the two-minute warning, Rudolph had a bad throw for JuJu on a come-back route and a good throw to Johnson on a short out. However, on 3rd down at the fringe of field goal range, Rudolph took a sack when Matt Feiler whiffed on blocking Dee Ford.

In total, the first half had 5 screens (between WR, TE, and RB screens) and 14 plays with routes beyond the line of scrimmage. On the downfield plays, Rudolph checked down 2 times, ran 3 times, had 1 pass dropped, and threw 5 bad passes on correct reads. He also had 2 passes where it was the right read and a good throw but also took a sack.

On the first drive of the second half the Steelers had some success on the ground which opened up play-action and Rudolph threw a nice out-route to Johnson but the play was called back on a penalty. After overthrowing Johnson on a deep ball, Feiler once again got smoked and Rudolph had to scramble away from pressure. He made an ill-advised throw across his body on the run which got intercepted.

After the 49ers punched it into the end zone, the Steelers took the field trailing 10-6. Rudolph’s first throw was an in-cutting route to James Washington. The pass was a little high but still went through Washington’s hands with Richard Sherman getting a hand in to break up the pass as well. Two plays later Rudolph was hit as he threw and missed JuJu on a crossing route.

After a three-and-out, a screen to Conner got the offense into a 3rd and manageable situation. Rudolph made a good read and a great throw to JuJu on a crossing route. JuJu broke the first tackle then was off to the races and took it all the way for 76 yards to put the Steelers back in front. This was the first time all game that Rudolph hit a receiver in stride and enabled JuJu to keep his momentum going. The touchdown put the Steelers back in front 13-10 but the drive itself was only 3 plays long and did not give the defense much time to rest. The tired defense let the 49ers march back down the field and retake the lead. The last play of the third quarter was a tight end screen.

The first play of the fourth quarter was another screen, this time to James Washington on the outside. Washington tried to fight for the first down but only managed to get 6 yards on 3rd and 7, most of it coming after the catch. The 49ers showed blitz but backed off and Rudolph threw the quick route to Washington but another 3-and-out put the defense back on the field.

Thankfully, a holding penalty on San Francisco stalled out their next drive. After throwing two screens the prior drive, Randy Fichtner finally opened things up. Rudolph made a good read and threw a good ball to James Washington on a deep post. Washington got dragged down from behind by Jason Verrett and would’ve caught the ball in stride for a long touchdown if not for the pass interference. Rudolph struck gold on the next play with a perfectly thrown bomb down the left sideline to Diontae Johnson. This put the Steelers back in front 20-17.

San Francisco drove into the red zone but fumbled, giving the Steelers the ball back with 6 minutes left in the game. Rudolph’s only attempt of the drive was a check-down to Conner off play-action that picked up a first down. Conner would fumble on the next play. Rudolph seemed to have other receivers open and could have pushed the ball down the field but took the safe play which moved the chains.

The 49ers scored with 1:09 left on the clock and two timeouts. Rudolph was pressured on first down and forced to throw the ball away while scrambling out of the pocket. On 2nd down, Rudolph seemed to have James Washington open on a WR screen but pump faked instead of throwing the ball. With no one else open, Rudolph scrambled for 7 yards and the Steelers had to burn a timeout. On 3rd and 3, Fichtner called a play with nearly all deep routes and Rudolph didn’t pull the trigger and got sacked. Rudolph made a bad read on 4th down and tried to force the ball to Washington despite having Johnson open on a come-back route at the sticks and JuJu streaking open towards the far side of the field.

In the second half, the offense did open up and Rudolph took some shots down the field. On his three deep balls, one was a slight overthrow of Johnson, one drew a defensive pass interference on Washington and the other was a touchdown to Johnson. Fichtner called 3 screens in the second half. The offensive line had some struggles and pressure caused an interception, Rudolph getting hit as he threw, a sack, and a throwaway. Rudolph made bad throws on correct reads twice while making good throws on the right reads 4 times. On two throws Rudolph made a combination of errors – a bad read and a bad throw.

In total for the game, Rudolph’s 35 dropbacks break down thusly:

You can see Rudolph’s game for yourself in the video below.

Images via WTAJ and NFL Next Gen Stats 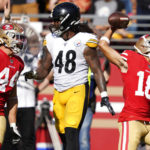 What Went Wrong on Third Down Defense Against San Francisco