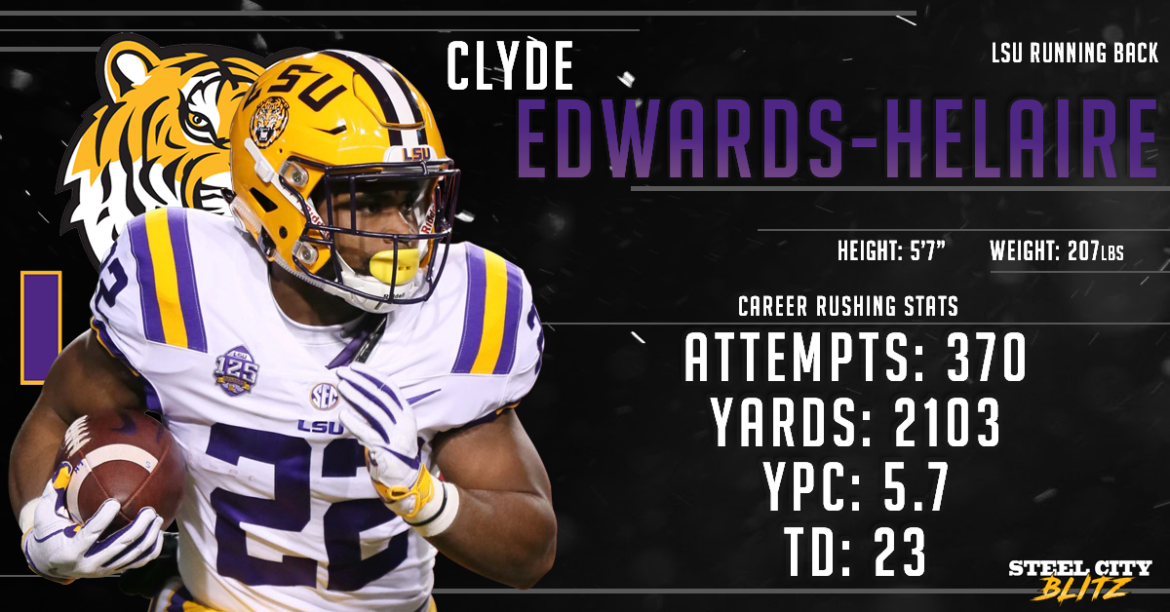 Due to concerns around the coronavirus outbreak, nearly all of the college pro days were cancelled this season. With the limited amount of in-person scouting available this draft season, teams will have to fall back on players they already know and coaches they trust for reliable information. Today we look at RB Clyde Edwards-Helaire, the feature back for the National Champion LSU Tigers.

Edwards-Helaire (“CEH” for short) wrapped up his junior year by being selected a first-team All-Conference running back (1415 yarads, 16 TDs) and second-team All-Conferencce returner (21.4 yards per return on kickoffs). He also added 55 receptions for 453 yards and 1 score. CEH is a well-rounded all-purpose back who is capable both on the ground and through the air. He is a bit of a “bowling ball” back at just 5’7″ but is shifty enough to work his way through openings in the line. LSU ran an RPO offense this season with the option to hand to CEH on nearly every play. He was the 2019 LSU Football MVP (ahead of Heisman-winner Joe Burrow) and a Permanent Team Captain.

CEH has a patient running style with the short-area quickness to make defenders miss. His tape is full of plays where he should be dead-to-rights in the backfield then drops a spin move or jump-cut to work his way free. He is a capable receiver out of the backfield who also lined up in the slot our out wide for LSU. One of CEH’s most impressive traits is that he continually keeps his legs churning and with his short stature presents a small target area, making him hard to bring down. He does not shy away from contact, but is slippery and elusive. In the passing game, he is a capable receiver who will work to get open and not sit and wait for the ball. He is a willing blocker though his technique needs some work as he can get run over by defenders.

The biggest shortcoming in Edwards-Helaire’s game is his lack of long speed. While he can make defenders miss in a phone booth, he is not a burner. He does not have the speed to beat defenders to the corner when trying to bounce runs and he isn’t going to rip off many breakaway touchdowns. CEH is not afraid of contact but doesn’t have the lower-body strength to bully through bigger defenders, particularly in short-yardage situations. He is better running with the defense spread out so he can attack gaps, rather than trying to push the pile on the inside.

Overall, Edwards-Helaire’s game is somewhat reminiscent of Le’Veon Bell. He is patient with good vision and sharp jump cuts and spin moves. He is very good at making something out of nothing and can use his sudden elusiveness to make defenders miss. CEH has very good vision to find the hole and hit it but doesn’t necessarily have the speed to outrun defenders. He is a good route-runner from both the backfield, the slot, or split out wide and will continue working to get open when the QB goes into a scramble drill. He is a willing blocker but needs some work on his technique. Overall, he has the opportunity to be a very good pro as he doesn’t take many big hits and seems to get stronger as a defense wears down and he can attack gaps when defenders get tired and lazy.