Home Offense Not the Best Start for Sanders
OffenseWide Receivers 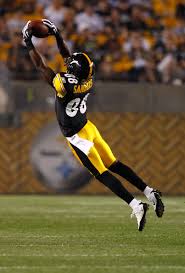 As most of you know, the Pittsburgh Steelers don’t discuss contracts during the season. With that in mind, Emmanuel Sanders will become a free agent at the end of this season since there was not extension granted to him. This doesn’t mean he won’t be a Steeler next year, but the likelihood is very slim.

Unfortunately for Sanders, the opener was not the kind of debut he was looking for in terms of marketing himself for other teams.

Sanders was targeted a game-high 12 times by quarterback Ben Roethlisberger but Sanders had just 7 receptions. The Steelers very first offensive play was a well-executed play-action pass designed to go to Sanders deep. Roethlisberger threw a great ball but it sailed through Sanders’ hands.

A tough catch? Yes it was, but it also was a catch good receivers make.

The number of targets didn’t surprise me at all. I mentioned during the preseason that I felt Sanders would be in line for a big year because of the attention paid to Antonio Brown on the other side. That’s exactly how things played out on Sunday.

I guarantee Sanders is not happy with his performance. He realizes that his success can run parallel to the success of the team. If he believes he deserves a big payday in free agency then he’ll have to show more consistency.

On the positive side, Sanders proved he could get open which is nothing to disregard. Now he needs to complete the package and become a more consistent receiver.

Where the heck is Weaton ? Unleash Ben and go 4 wide. Pats have no running game but I’ll bet their O still is top 10 in scoring this season..

Watching the game vs. the Titans, two things about Sanders stood out: (1) The two drops of perfectly thrown long passes, of course, which make us wonder why he’s getting paid $2.5 million this year, and also make us long for anybody, anybody, who wouldn’t let those passes fly through their hands; and (2) Lack of Separation, and THAT is possibly even more worrisome and disturbing than the drops.

Sanders simply doesn’t get separation regularly — or often enough, anyway. The Titans CBs were draped all over him, which even he mentioned when trying to explain his first drop. A good receiver makes that catch. You outmaneuver the DB, get body position, and catch the ball. This is the NFL — the DBs are going to be there, but he’s got to do a better job of getting separation. And then actually catch the ball. He’s not going to do any of that, though, not often enough, which is why he will never be more than a borderline No. 3 receiver in the NFL. And THAT is why the coaching staff needs to start giving Markus Wheaton more snaps sooner than later. I have more faith in Wheaton at this point than Sanders.

I said it at the time: The Steelers made a mistake in April by retaining Sanders instead of letting him go to New England in return for a third-round draft choice (91st overall). I was hoping WVU wide receiver Stedman Bailey would be available with that 91st pick, and sure enough, he was. Bailey went to St. Louis with the 92nd pick overall (the very next pick after the pick the Steelers would have gotten from New England, which, interestingly passed on Bailey). Intuition says Bailey would have made a perfect Steeler. We would have had both Wheaton and Bailey, and both would be under contract for four years. As it stands now, Sanders can become an unrestricted free agent after this season.

I wrote about this at the time on my blog:
http://joeyporterspitbulls.blogspot.com/2013/04/another-mystifying-personnel-move.html

Frankly, I would feel a LOT better about the Steelers’ receiving situation with Antonio Borwn and Markus Wheaton starting, Jericho Cotchery as the No. 3 receiver, and Stedman Bailey as the No. 4 guy. Clearly, though, the Steelers didn’t feel comfortable going with such a young receiving corps, and maybe that was a concession to Ben Roethlisberger. The trouble with Sanders, however, is that he is a known commodity — he has no upside. What you see is what you get, and what we are seeing is a smallish receiver who fails to make tough catches and gets little if any separation from decent NFL cornerbacks. He’s not helping.

About that draft, in retrospect, it will be interesting to see how Tyler Eiffert and Margus Hunt fare against the Steelers on Monday night. We may or may not see Eiffert matched up against Jarvis Jones, but it will be interesting to see how they match up against one another (both in blocking and passing situations). Not to say Jarvis Jones isn’t the better pick — time will tell — but the Steelers do not currently have a viable tight end. Considering their tight end last year was the team’s MVP, that’s a big fail on the part of the personnel dept. Before the draft, I was interested in trading down in the first round and possibly taking Zach Ertz or Eiffert, in the unlikely event he was still available. I would have liked to have had the extra picks, and I thought Ertz would provide decent value late in the first round or early in the second round — he went to Eagles early in the second round (No. 35 overall).

On the other hand, the Steelers also don’t have an experienced ILB. If the Steelers had let Sanders walk, they would have had that extra draft pick and maybe had some more flexibility in the draft. I’d advocated before the draft that the Steelers draft Margus Hunt and convert him to inside linebacker. He would have been a project, no guarantees of success, but it would have been an interesting development.
Here’s the link:
http://joeyporterspitbulls.blogspot.com/2013/02/smus-margus-hunt-at-ilb-for-steelers.html

I also hate the idea of Margus Hunt being on the Bengals. We’ll see if he blocks any kicks (field goals and extra points) on Monday night — he blocked 17 of them in college (NCAA all-time record-holder). That, as much as any help he provides on the defensive line, may pose a problem.

And, about the tight end situation, back in February, I asked “Why Not a Tight End in the First Round?”:
http://joeyporterspitbulls.blogspot.com/2013/02/why-not-tight-end-in-first-round.html

Even before that post, I wrote:
“The Ravens’ tandem of Dennis Pitta and Ed Hickson at tight end makes us wonder if it wouldn’t make sense for the Steelers — even with all their other needs — to consider drafting Stanford tight end Zach Ertz (6’6″, 252), especially considering the multiple serious knee injuries Heath Miller suffered at the end of the season. Nobody knows what Miller’s recovery time will be, or if he will be the same player (a great one) when he returns.”

Not to be bitter.

Emmanuel Sanders may have a place in the NFL — as a No. 4 receiver somewhere, or maybe a No. 3 (slot) receiver in the right system. He’s not a top-flight No. 2 receiver. He sure isn’t worth the $2.5 million the Steelers are paying him this year. Legitimate No. 2 receivers make the type of catches he dropped last Sunday vs. the Titans.

Right now, Markus Wheaton looks like the better option at receiver — from what we’ve seen so far, he’s faster, bigger, has better hands and appears to get separation from defensive backs. He seems to have better hands than Sanders, too, and he’s more polished.

Just as the Steelers seem to be intent on giving Jarvis Jones greater playing time at linebacker, I wouldn’t be at all surprised if they start doing the same with Markus Wheaton at wide receiver.

Our only consolation about Sanders’s signing the matching offer the Steelers gave him this off-season is that he is not helping to allay the Patriots’ receiver woes, which were on vivid display during Thursday night’s game vs. the Jets.