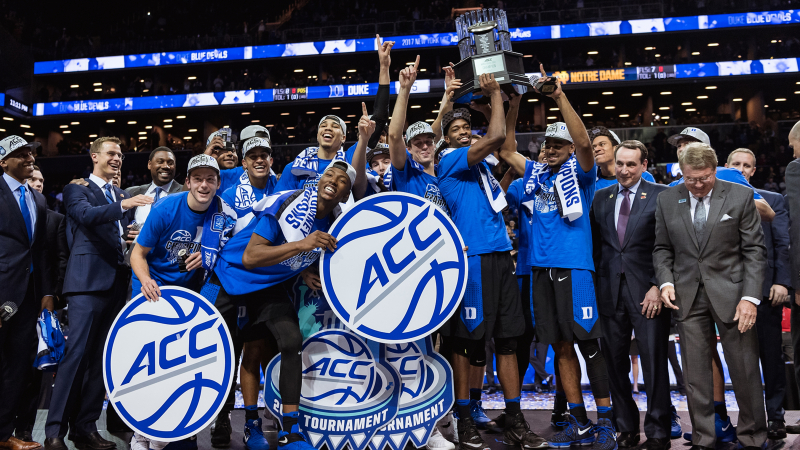 The 2018-2019 college basketball regular season has come to a close. Welcome to Champ Week. It is Conference Tournament time. Last week, 12 conferences began their Tournament play and a number of teams have already clinched spots in the NCAA Tournament field. Earlier this week I broke down the resumes of the 16 teams that enter Champ Week on the Tournament Bubble. We are less than a week away from Selection Sunday and 20 more tournaments will take place this week. Of those, 13 will be from Mid-Major leagues, which are all previewed yesterday. The seven major conference tournaments are previewed here.

As we head towards Selection Sunday, make sure to bookmark our Conference Tournament Tracker to follow along with who has secured automatic bids and what teams are still alive in their respective tournaments.

Additionally, I’ll be updating my Bracket Projection much more frequently as we move closer to Selection Sunday.

Tournament Format: All 12 teams qualify with the top 4 getting byes to the quarterfinals

Recent History: This is the sixth year for the American Athletic Conference after the breakup of the Big East in 2013. SMU is the only team to win multiple AAC Tournaments, both as the #1 seed. UConn has appeared in 3 of the 5 previous AAC Championship games. One of the top 2 seeds has won all but 1 of the AAC Tournaments so far.

Preview: Two AAC teams should feel fairly secure in their spots in the NCAA Tournament field. Houston will likely find themselves in the top four seed lines (probably as a 3-seed if they avoid any upsets). Cincinnati should land somewhere near the middle of the pack between a 6 and 8 seed. UCF has strong computer metrics and scored two big wins over the last two weeks of the season, knocking off Cincinnati and Houston to put the Knights in position to land in the 8-10 seed range (which could be improved by a deep run in Memphis). Temple and Memphis are hovering around the bubble and feature the conference’s two leading scorers in Memphis’ Jeremiah Martin (19.7 PPG, 4.5 APG) and Temple’s Shizz Alston (19.7 PPG, 5.1 APG). Memphis is the league’s highest-scoring team at 81 PPG and will have the home crowd behind them in the tournament. Houston and Cincinnati played stifling defense this season, holding opponents to just 62 points per game. Houston is also the league’s top 3-points shooting team with 5 players averaging over 33% from deep.

Tournament Format: 14 teams qualify with the top 4 receiving double byes to the quarterfinals. The bottom 6 teams play in 3 play-in games.

Recent History: Either Duke or North Carolina has appeared in every ACC Championship game since 1997, a streak of 21 straight years. Duke has won 11 titles since 1999, including becoming the first ACC team to ever win 4 games in 4 days in 2017.

Preview: The ACC might get more teams into the NCAA Tournament than any other conference, but in reality is a 3-team race for the title. Virginia and North Carolina split the regular season crown. Both of Virginia’s losses came against Duke. The Tar Heels swept their rival Blue Devils, who lacked Conference Player of the Year Zion Williamson for both meetings. Duke will get Zion back for the Conference Tournament which could set up a rematch between Duke and Carolina in the semifinals. All three of those teams are in the conversation for #1 seeds in the NCAA Tournament. Florida State and Virginia Tech both have solid resumes and could find themselves on the 4 or 5-seed lines. Louisville should land somewhere in the middle of the field in the NCAA Tournament after being part of the Committee’s initial bracket reveal but not adding any quality wins since then. Syracuse should also make the Tournament based on their win at Duke but their two bad losses will land them around the 9-11 seed lines. The second round game between NC State and Clemson may be a bubble elimination game as both teams are squarely on the cut line for the Big Dance. North Carolina and Duke have the highest-scoring offenses, both averaging over 84 points per game. The best defenses come from the state of Virginia with the Hokies at 62 PPG and the Cavaliers at an incredible 55 PPG thanks in part to their slow and boring style of play. Duke teammates RJ Barrett (23.4 PPG) and Zion Williamson (21.6 PPG, 8.8 RPG, 1.8 BPG, 2.2 SPG) lead the conference in scoring.

Tournament Format: All 10 teams qualify with the bottom 4 teams playing in 2 play-in games followed by a normal bracket.

Recent History: Since the breakup of the old Big East in 2013, Villanova has been the top seed in 5 of the 6 tournaments. Villanova has appeared in the last 4 Big East championship games and is the two-time defending champions. Seton Hall has been the only team able to beat the Wildcats in the conference tournament.

Preview: Top-to-bottom the Big East was the closest conference in the nation this season. Villanova finished a game ahead of Marquette in the standings. After that it was essentially a free-for-all. Seton Hall, Xavier, Creighton, and Georgetown finished in a 4-way tie for 3rd place with St John’s a game behind them and the triumvirate of Providence, Butler and DePaul 1 game behind the Johnnies. All told, every team finished within 6 games of first place. All 10 teams averaged between 71 and 81 points per game with Georgetown (80.6 PPG) and Creighton (79.3 PPG) leading the way. Villanova, Marquette, and Providence were the only teams to hold opponents under 70 points per game. Marquette also features the league’s leading scorer in Markus Howard (25.0 PPG). St. John’s guard Shamorie Ponds is a player to watch on both ends of the court and ranked in the top 5 in the league in points (19.8 PPG), assists (5.2 APG), and steals (2.6 SPG). At this point Marquette and Villanova are the only locks for the NCAA Tournament and both may fall outside the top 4 seed lines. Seton Hall should make the field and land somewhere between the 9 and 11 seeds. St John’s is hovering right above the bubble with Georgetown, Creighton, Xavier, and Providence needing a deep run to insert themselves into the conversation.

Tournament Format: All 10 teams qualify with the bottom 4 playing in 2 play-in games followed by a normal bracket.

Recent History: Kansas’ historic streak of 14 straight years of winning at least a share of the Big XII regular season title came to an end this season. In the last 13 seasons (since 2006) only 3 teams have won the Big XII Tournament – Kansas (8 times), Iowa St (3 times), and Missouri (twice). Missouri is no longer in the conference. Iowa State’s 3 wins all came in the last 5 years. West Virginia has reached the championship game in 3 straight seasons but lost each time. Since the inception of the Big XII tournament in 1997, Iowa St (in 2014 and 2017) has been the only team to win the tournament seeded lower than 3rd.

Preview: Kansas has struggled this season with availability issues between player injuries and players leaving the team. This opened the door for Kansas St and Texas Tech to share the regular season conference title. All three teams are in the mix to find themselves on the top four seed lines in the NCAA Tournament. Iowa State was part of the Committee’s initial top 16 bracket but failed to add to their resume since early February and has slipped down around the 6-8 seed range. Baylor and Oklahoma should find themselves in the middle of the pack and land somewhere in the 8-10 seed lines. TCU, as is typical for a Jamie Dixon team, is hovering just on the right side of the bubble. Texas has a very good resume with some marquee wins but also has a 16-15 overall record entering the Big XII Tournament, which will make the Longhorns an interesting case for the Committee. Kansas’ Dedric Lawson led the Big XII in scoring (19.1 PPG) and rebounding (10.6 RPG). Iowa State led the league in scoring at 77.7 PPG while co-champions Kansas St and Texas Tech were the only teams to hold opponents under 60 points per game.

Tournament Format: 12 teams with the top 4 receiving byes to the quarterfinals

Preview: The Pac-12 was more like a mid-major league than a power conference this season. Washington is the only team that should feel solidly comfortable about their position if they don’t win the conference tournament. That said, the Huskies lack good wins and will still likely fall in the middle of the bracket in the 7-9 seed range. Senior guard Matisse Thybulle is in the conversation for national defensive player of the year with 3.5 steals per game and 2.2 blocks per game. Arizona State is the only other team at this point that seems capable of earning an at-large bid, but will likely be right on the bubble.  UCLA and Arizona St were the highest-scoring teams in the league while USC and Utah were the best outside shooting teams. Washington State’s Robert Franks (22.1 PPG) was the Pac-12’s leading scorer. There is a lot of mediocrity in the middle of the pack here but a big run by Oregon could put the Ducks on the Committee’s radar. Unless there is a major upset, the Pac-12 will likely be a 2-bid league.

Tournament Format: 14 teams with the top 4 receiving byes to the quarterfinals and the bottom 4 playing in 2 play-in games

Recent History: Kentucky won their fourth straight SEC Tournament last season. The Wildcats win from the #4 seed broke a string of 8 straight seasons where one of the top 3 seeds won the tournament. Kentucky has reached the championship game in 8 of the last 9 years.

Preview: After Kentucky and Tennessee battled all season at the top, LSU snuck in and won the SEC regular season title thanks to a 5-game winning streak to end the season. Kentucky battled through some injuries but should be fully healthy come Tournament time. Tennessee was the #1 team in the nation for a while and has the conference’s leading scorer Grant Williams (19.3 PPG), 7.7 RPG. Tennessee, LSU, and Auburn all averaged over 80 points per game this season. Mississippi State and Auburn were the top outside shooting teams. At this point, Kentucky, Tennessee, and LSU should find themselves in the top three seed lines on Selection Sunday. Mississippi State and Auburn should be in the next group of teams, likely in the 5 to 7 seed range. Ole Miss has a solid enough resume and their lack of bad losses should put the Rebels in the middle of the pack. Florida, Alabama, and Arkansas are all in the bubble picture with Florida having the best chance, Alabama on the bottom side of the bubble and Arkansas with some work to do to get noticed by the Committee. 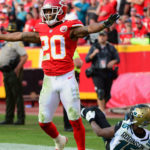