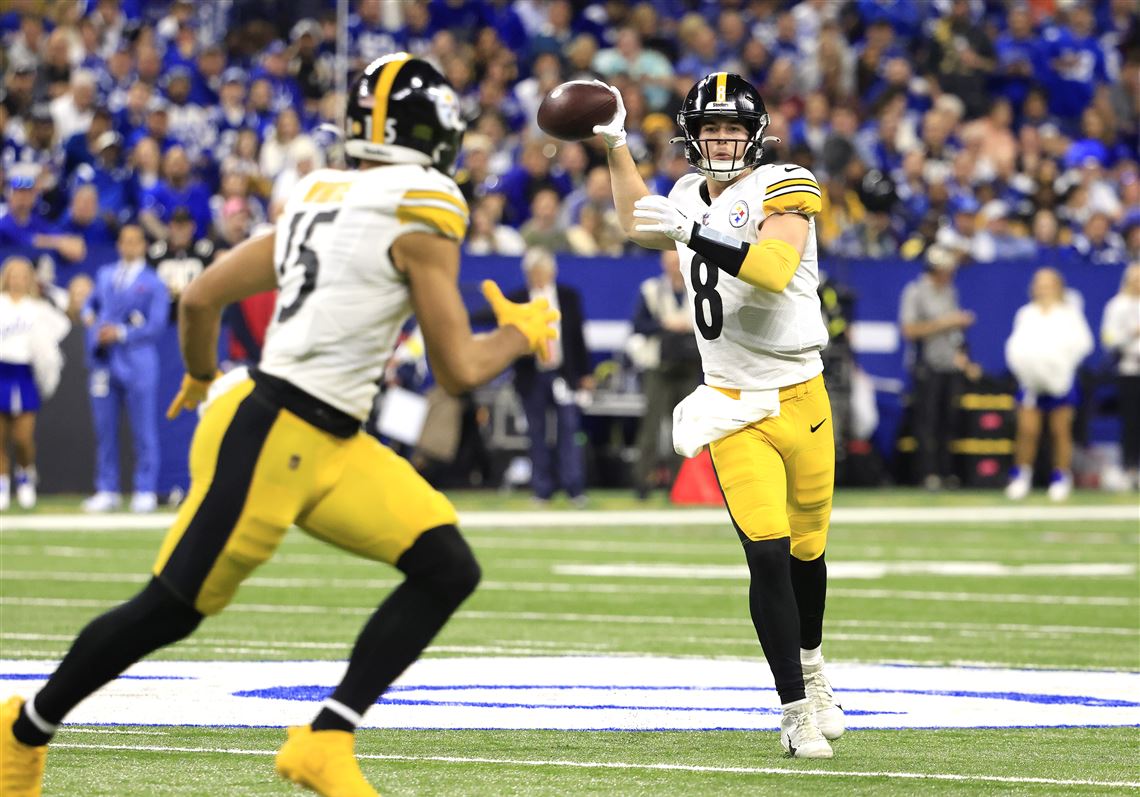 Let’s not get ahead of ourselves here; Kenny Pickett remains a work in progress as it pertains to being the quarterback of the Pittsburgh Steelers. That aside, there were moments in last night’s 24-17 win over the Indianapolis Colts where Pickett clearly showed he’s progressing in a positive manner.

There’s an old saying in football with regards to hitting open receivers. “There’s open and then there’s NFL open.” One of the biggest adjustments QBs have to make from the college ranks to the professional one is ‘throwing receivers open.’ In other words, you have to be able to lead your receivers and get the ball in positions where either they catch it or no one does.

We saw this on display several times last night. Late in the game, Pickett hit Pat Freiermuth on a key third down. Freiermuth broke to the outside and Pickett’s throw was perfectly placed in front of his tight end. Freiermuth was able to catch it and use the momentum of reaching for the ball to turn up field for more yards.

Earlier in the game, Pickett found Diontae Johnson a couple of times placing the ball in perfect position for Johnson to make the grab. Pickett’s terrific sideline throw to George Pickens on a second quarter drive was placed in the exact spot (back shoulder type throw) where only Pickens could grab it. Pickett also had a pass go incomplete at the goal line to Freiermuth that was thrown well. Freiermuth doesn’t need to be told that he should have done a better job of sealing off or boxing out the defender.

While I can’t be 100% certain simply because I don’t know the discussions that Pickett has with Matt Canada and Mike Sullivan, I do believe they are working with him to read one side of the field before advancing to the whole field. We saw several instances last night where Pickett made a couple of reads and then pulled the ball down and took off.

He ended up gaining 32 yards on six carries including a designed QB draw that picked up nine, but overall, he seemed more calculated in where and when he was scrambling. This shows a growth in maturity over recent weeks.

I’m not sure how anyone could come away from that game and believe that Pickett’s confidence isn’t growing. Knowledge of the offense and knowing where guys are supposed to be really hasn’t been a problem. Last night however, we saw a guy start making more throws that he may not have attempted a few weeks back.

Keep in mind that he has receivers who’ve grown frustrated with the offense, Matt Canada and Pickett to a degree. With only one ball, Pickett can only keep one guy happy at a time. Last night he hit ten different receivers which is almost unheard of these days. To me that shows a guy willing to put the team ahead of himself and the needs of others. Let’s not forget that after last week’s abysmal second half, Pickett could have easily fallen into the same trap. After a poor start in the third quarter he went on to lead a 75-yard fourth quarter touchdown drive. That’s a big deal in my book.

As I stated in the opening, there’s still a lot that needs to be addressed. Pickett again missed a pass rusher coming completely free and took an awful sack. He has to see this better and has to understand where his hot routes are. Last night wasn’t the first time this has happened.

We didn’t see much in the way of RPOs last night and I’m guessing that’s mostly due to his hesitation at getting the ball out. Several times since he became the starter he held the ball too long resulting in ‘illegal man downfield” penalties. That can still be a very important part of this offense so removing it altogether shouldn’t be an option. Pickett needs to know what his options are and process them quicker.

No one, especially me, should be convinced one way or the other about the future of Kenny Pickett. Our ‘rush to judgment’ society is thankfully being held at bay so far by Mike Tomlin and the Steelers in general. Franchise quarterbacks don’t grow on trees and whether Pickett becomes one or not I do not know. What I do know is he progressed in the right direction last night and I’ll gladly take that.

Steelers History: Pittsburgh Sets a Touchdown Record Against the Falcons