Steelers History: Pittsburgh Sets a Touchdown Record Against the Falcons 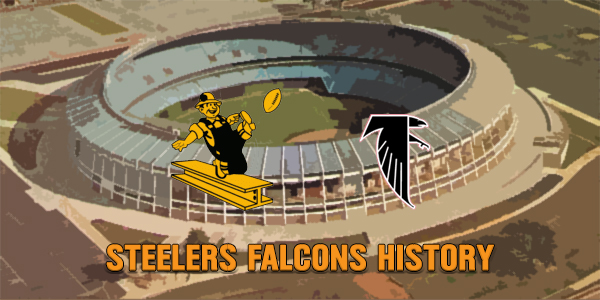 The Pittsburgh Steelers comfortably control their contests against the Atlanta Falcons with 16 victories and only two losses, but both those defeats were on the road. The last time these two teams met in Atlanta, the 2014 game saw Ben Roethlisberger lead his team to a 27-20 triumph.

The Falcons joined the NFL as an expansion team in 1965. Such was the growing popularity of professional football there were four applicants to put a franchise in Atlanta. The record price paid of $8.5 million to enter the league enabled the franchise to play their first season in 1966.

As expected in their rookie season, they lost their first nine games before a 27-10 win in New York saw them earn the tag of giant killers. Before playing the Steelers in the season finale, the Falcons added back-to-back wins against the Vikings and the Cardinals.

With just four wins and a tie, the Steelers traveled to Georgia. The Falcons were looking to establish a new record for a first-year team in the NFL with a win. Falcons’ coach Norb Hecker suggested his team would need three touchdowns to beat the Steelers.

Those expectations didn’t last too long as Pittsburgh’s quarterback Bill Nelsen tore the Falcons apart passing for 334 yards when they overwhelmed Atlanta 57-33. Wide receiver Roy Jefferson caught a touchdown pass of 68 yards to contribute to the Steelers victory.

Steelers Coach Bill Austin was more than elated with just another win. He had spent all season waiting for the game for just one reason. “I remember one sportswriter suggesting at the beginning of the season that about the only team Atlanta had a chance to beat this year was Pittsburgh,” stated Austin. He had kept the clipping on his desk as motivation and added, “I don’t like people to say that about my club.”

When they met again three years later, the Steelers nestled bottom of the Century division while the Falcons were last in the Coastal division. With one eye on the following year’s draft, the Pittsburgh Press suggested the winner would draw a step farther away from O.J. Simpson. The USC running back was the favored choice to be drafted number one overall.

Atlanta’s Coach Norm Van Brocklin had been hired after the team opened the season with three losses. He made wholesale changes in a desperate attempt to turn the team around and recorded a win over the Giants before hosting the Steelers.

Pittsburgh was still the Same Old Steelers. Their one win, the week before the two teams met, was a 6-3 kicking duel with the Eagles.

Coach Austin had been working on the combination of his quarterback Dick Shiner and receiver Roy Jefferson after he noticed the split end tended to drop passes when cutting from the right to his left.

For this game, Austin began Jefferson on the left and the adjustment immediately paid off. With the Steelers offensive line controlling the line of scrimmage, Shiner completed seven straight passes while Jefferson hauled in touchdowns completions of 27 and 61 yards in the first quarter.

After missing a 44-yard field goal attempt, the Steelers produced a touchdown scoring drive in the final two minutes of the half. Shiner led them 90 yards on 13 plays, completing five of six passes. Don Shy’s 3-yard touchdown run extended Pittsburgh’s advantage to 21-0.

At the beginning of the second half, the Steelers continued to control the exchanges. After recovering a fumble on Atlanta’s first drive, Pittsburgh added another score. It was the same combination of Shiner to Jefferson which did the damage with a 9-yard touchdown.

The Steelers continued the scoring after a Paul Martha Interception. A 1-yard touchdown run from Earl Gros increased their lead. Although the conversion was blocked, the Steelers were still 34 points ahead before the Falcons attempted a fightback.

At the end of the third quarter, Atlanta was sparked into life with a touchdown. Their revival continued into the final period with another score to reduce their deficit to twenty points.

Shiner asked his coach to take him out of the game and he was replaced by Kent Nix who continued the hook up with Jefferson, throwing him a 29-yard touchdown pass.

While most of the 50,000 fans were drifting away following another disappointing performance from their team, the Falcons wrapped up the scoring with a consolation touchdown.

The Pittsburgh Steelers 41 at the Atlanta Falcons 21

Dick Shiner thought his performance was one of his best in pro football. “I’ve had college games where I threw for more yards, but I don’t think I ever played as well as I did today.”

Shiner explained his request to be taken out of the game. “I asked Austin to use Kent Nix when and if he thought we had a safe lead. I know what it’s like to sit on the bench when your team is running away with a game. I had four years of it.”

Shiner had spent four unhappy seasons as backup with the Redskins and Browns before being traded to the Steelers. After Coach Noll selected Terry Bradshaw in the 1970 draft, Shiner was again traded to the Giants where he continued his backup role.

The Steelers finished the 1968 season 2-11-1 and they would fire Austin. His parting gesture was to describe the team he was leaving for the next coach as worse than an expansion club. That was the mountain his replacement had to climb and why Chuck Noll took a few years to turn them into winners.

Roy Jefferson’s four touchdowns set a new franchise record that is still intact. Jefferson’s 199 yards receiving at the time were the fourth best in franchise history to Buddy Dial’s 235.

In Coach Noll’s first season, as much as it was a disastrous 1-13, Jefferson was the second-best receiver in the league with 1,079 yards. Because of friction between the coach and Jefferson, Noll decided to trade the player to the Baltimore Colts who went on to win a Super Bowl in his first season with them.

Although it appeared a bad deal at the time, Coach Noll was more interested in building his team through the draft and this he successfully achieved after he was provided with the time by the Rooneys.