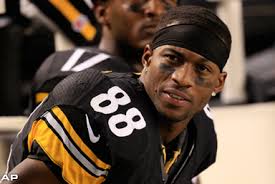 It was fitting that the Pittsburgh Steelers’ finally gasp in the 2013 season was left in the hands of Emmanuel Sanders last night. I say “fitting” because the ball went through the hands of Sanders who has had that problem most of the season.

He isn’t the only reason the Steelers now stand at 5-7 and virtually out of the NFL Playoffs but his butterfingers didn’t help.

To be fair to Sanders, it was a horrible play call. Putting the entire season in his hands was one thing but limiting the options for Ben Roethlisberger was idiotic as well.

The Steelers must win their final four games of the season and they will need help. They will need to get losses from San Diego, Tennessee, Miami and the Jets for starters and perhaps two losses from some because they trail on several tie-breakers in the AFC as well.

I’m not giving up and I haven’t lost faith but let’s be realistic here shall we? This team is not going anywhere and I’ll gladly eat crow should they prove me wrong but I feel pretty confident about my feelings. With that said, it’s time to look to next year and beyond and it’s time to get the young guys more time on the field.

Where should Mike Tomlin start? He can start with sitting Emmanuel Sanders in place of Markus Wheaton or even Jerricho Cotchery at the number two spot. I advocated the team let Sanders walk to New England during the offseason when we could have received a third-round pick and now he’ll more than likely leave via free agency and the team will get nothing for him.

Sitting Sanders could also allow Derek Moye a chance to show what he can do.

Defensively, get Ryan Clark a seat on the bench or let him go to Bristol, Connecticut where his mind clearly is anyway. I’m sure ESPN will welcome him with open arms. Let Will Allen play more and when he’s healthy, get Shamarko Thomas back on the field.

For a seventh-round pick defensive end Brett Keisel has had a great career in Pittsburgh but as he left the field early in the game it’s clear his time is done. The Steelers need to keep going with youth on the defensive line and will need to address it in the draft as well.

As far as I’m concerned, LaMarr Woodley can keep his sweat suit on. Jason Worilds has gone above and beyond much of what Woodley can do and Jarvis Jones is making strides in a positive direction as well.

The problem with Woodley is his contract which will now hamstring the Steelers for a few more years. Should the Steelers be able to re-sign Worilds in the offseason, then Woodley needs to move to the right and Jones can become a situational pass rusher for next year at least.

There is no use in delaying the inevitable in Pittsburgh. Now is the time to worry less about wins and more about the future.

I believe they really have to evaluate everyone on the roster and very honestly . Question like are we set at the skill positions?? I mean i know everyone loves Bell but his yard per carry are very low, is Wheaton really a NFL WR., can J. Jones play in the NFL. I know everyone loves this years draft but the teams record and there production raise a bunch of questions no seems to want to ask i. [ did we blow another draft? ] I feel this team really needs consider changing the way they evaluate player, because we are not getting it done on draft day. When i look at this team with it’s current roster i see two pro bwlers on off.[Ben and Brown] and on defense our top flight players are Timmons and maybe worilds. every where else there are limitations and or questions. When this season is all said and done will may very well end up just like last year 8-8. Are we a better football team ?? Can it win while retooling?? Will the front office personnel who got us to this point rebuild this team and are they capable?? A team who’s greatest strength has always been great leadership will need it now.

You raise a number of great questions Bob and I think the entire organization will in fact get a significant look in all areas. I wish I had the answers we all need to hear but I don’t have them and no one does. I think Jones and Wheaton will be key parts of the team moving forward but who knows? We are looking at least at one more year of mediocrity with our cap situation.

Not only is Keisel time is done so is Ike Taylor. I am a big supporter of Taylor, but his time has come. I really do not see the Steelers paying his contract next year. Just another position that the Steelers have to look at and Cortez Allen is not the answer.

the steelers will still get a 3rd round pick for sanders after he leaves for free agency . they will just have to wait to next years draft

as far as woodley – keisel – clark they have been great steelers and all key players in the super bowl days – but don’t know if they have much left . sooner or later your body breaks down . im just saying