After trailing the Texans 21-17 at halftime on Sunday, many anticipated a high-scoring second half. The Steelers got the ball after halftime and would drive down the field and kick a field goal to cut the lead to 21-20. The teams would trade 3-and-outs for the rest of the third quarter. The Steelers defense came out strong in the second half, but it would take a splash play from Mike Hilton to turn the tide in this game and ultimately lead the Steelers to victory. Here is a breakdown of Hilton’s game-changing interception.

As the quarter ended, Houston started to put a drive together, picking up a few first downs. With a first down at the edge of field goal range, the Texans tried an end-around to Brandin Cooks that TJ Watt blew up for a 5-yard loss. This play by Watt to put Houston behind the chains should not be discounted as it knocked the Texans out of field goal range. After an incomplete pass, it was 3rd and 15 from the Steelers 43 yard line. Credit is also due to Keith Butler, who dialed up a heck of a defensive call to confuse Watson. 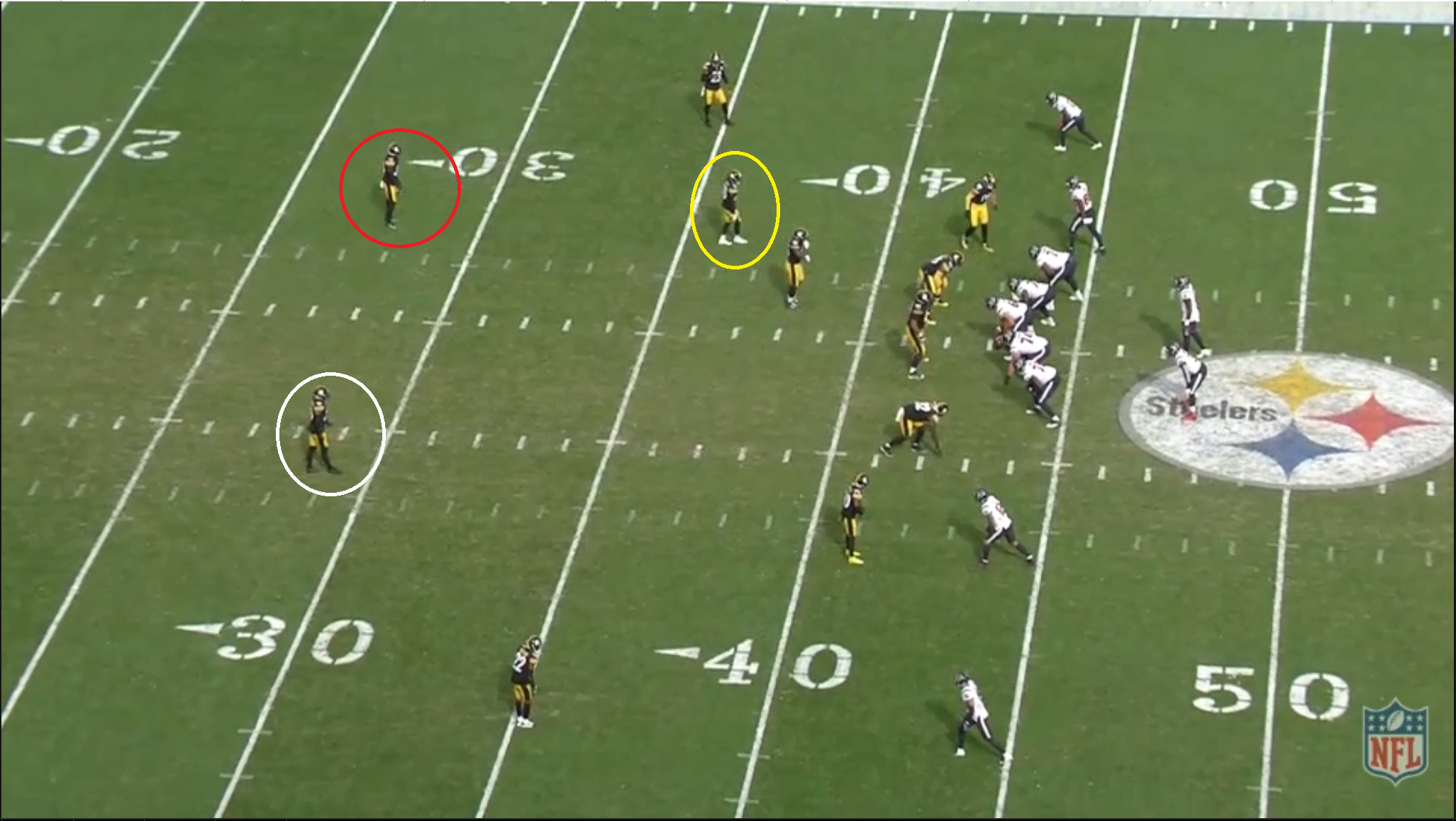 The Steelers come out showing what looks like a Cover-2 alignment. Minkah Fitzpatrick (circled in white) and Terrell Edmunds (circled in red) are clearly the two high safeties, splitting the field. The safeties are lined up 15 yards off the line of scrimmage on a 3rd and 15, essentially guarding the yard marker the Texans need to reach. Across the defense, the Steelers have 4 rushers in Watt, Buggs, Heyward, and Adeniyi. With Devin Bush shading behind Heyward, Watson can assume that if any heavy rush comes it will be from his right side. The brilliance of this defensive call is in the “switch” of levels. Mike Hilton (circled in yellow) starts lined up in the slot, and in some Troy Polamalu-esque play design, he essentially switches spots with the safeties to turn a Cover-2 look into a Cover-3 alignment. This is how a typical Cover-3 defense looks: 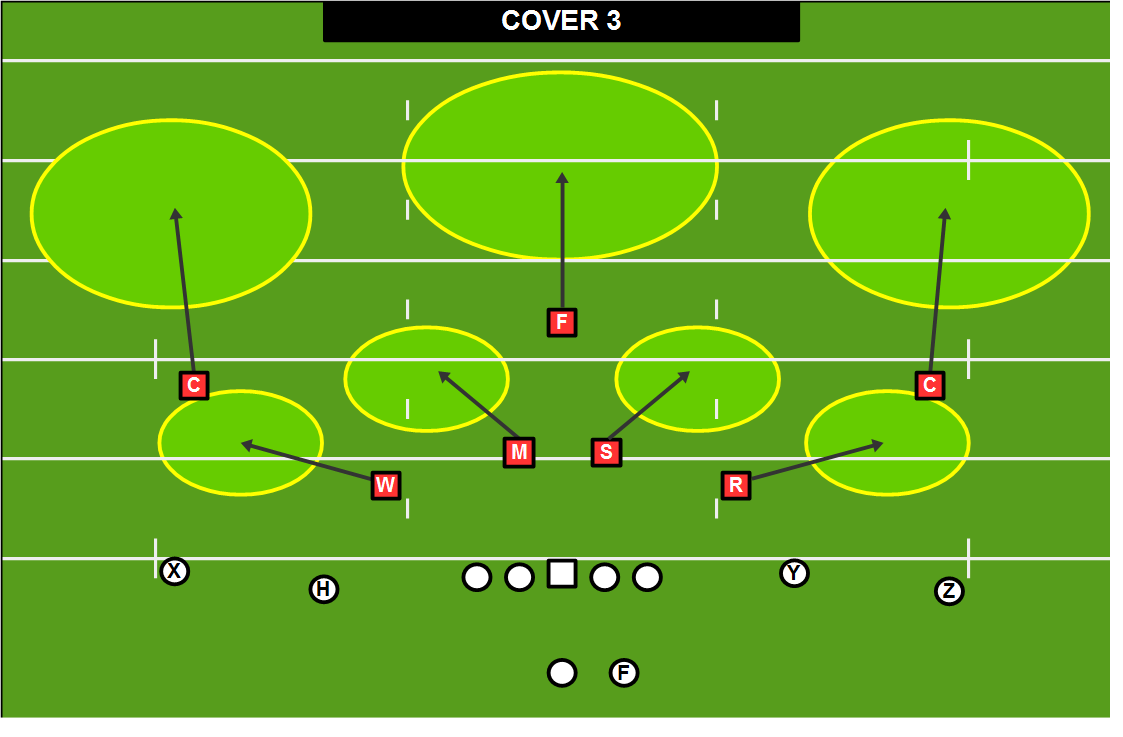 What the Steelers do differently here is to have Hilton, lined up as one of the underneath defenders, run straight back into the middle of the field, passing the safeties who basically just hold their ground in the middle of the field, to become the deep safety. Houston is running a “dagger” route concept with Kenny Stills running a go route out of the slot and Will Fuller running the in-breaking route from the flanker position. On the far side of the field, Brandin Cooks is running a come-back route at the sticks. Overall, this is a fairly solid route concept on 3rd and 15 and would have worked fairly well against the Cover-2 alignment that the Steelers showed pre-snap. 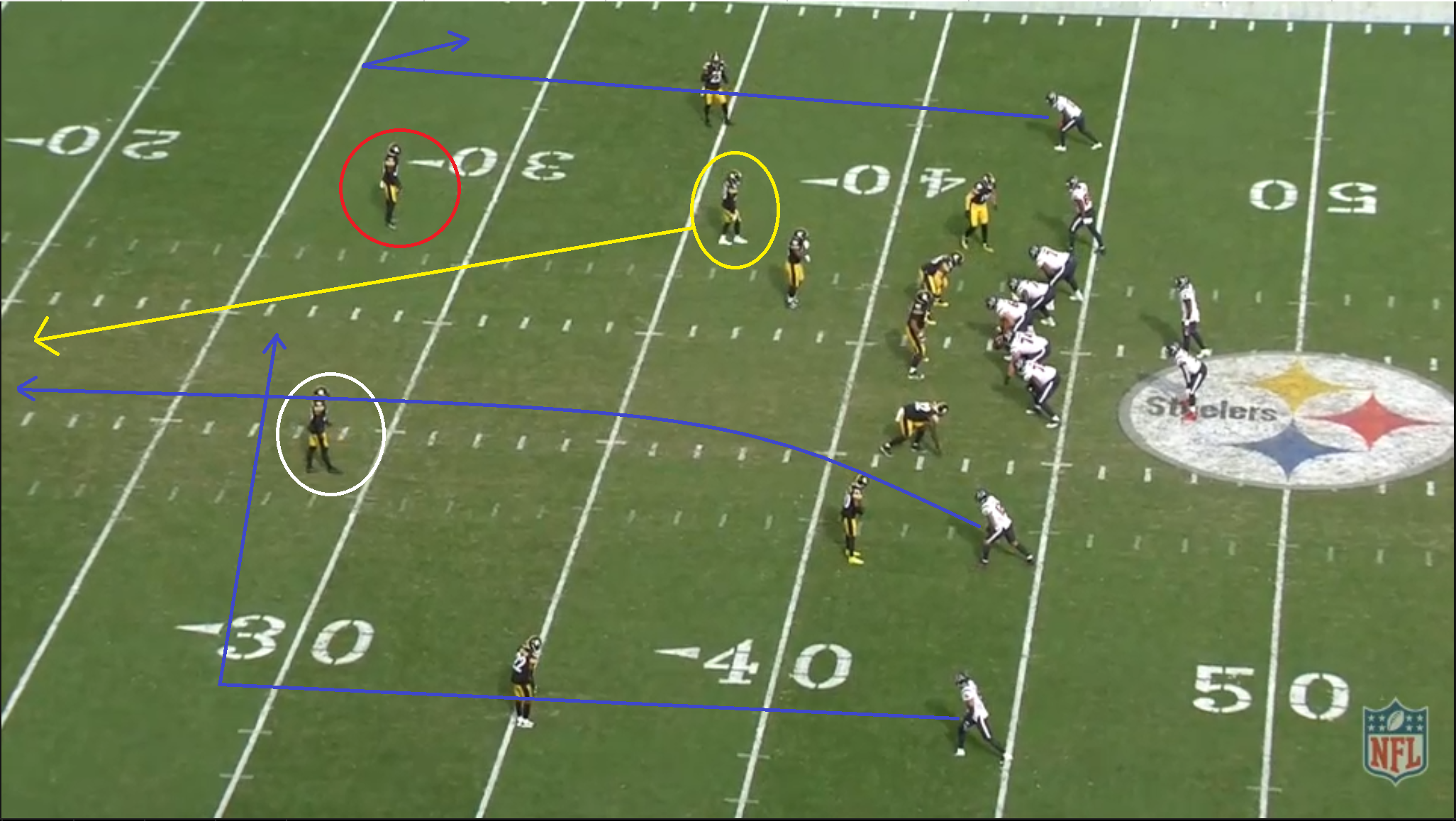 After the snap, Cam Sutton who had been lined up on Stills in the slot drops back and passes Stills off to Minkah in the middle of the field. Minkah (in white) picks up the go route then passes it off to Hilton (in yellow) who at the snap broke hard to get back to the deep middle. On the outside, Nelson maintains outside leverage against Fuller. With Sutton dropping into an underneath zone, Watson does have a window to attempt to throw the ball to Fuller on the in-cut. However, Ola Adeniyi (circled in gray) gets the edge on the tackle, forcing Watson to double-clutch the ball and step up in the pocket. This little pressure and movement essentially closes the window to throw to Fuller as his in-breaking route now brings him right into Minkah’s territory. Up front, Cam Heyward (orange line) loops around behind Isaiah Buggs and closes down Watson’s throwing lane. 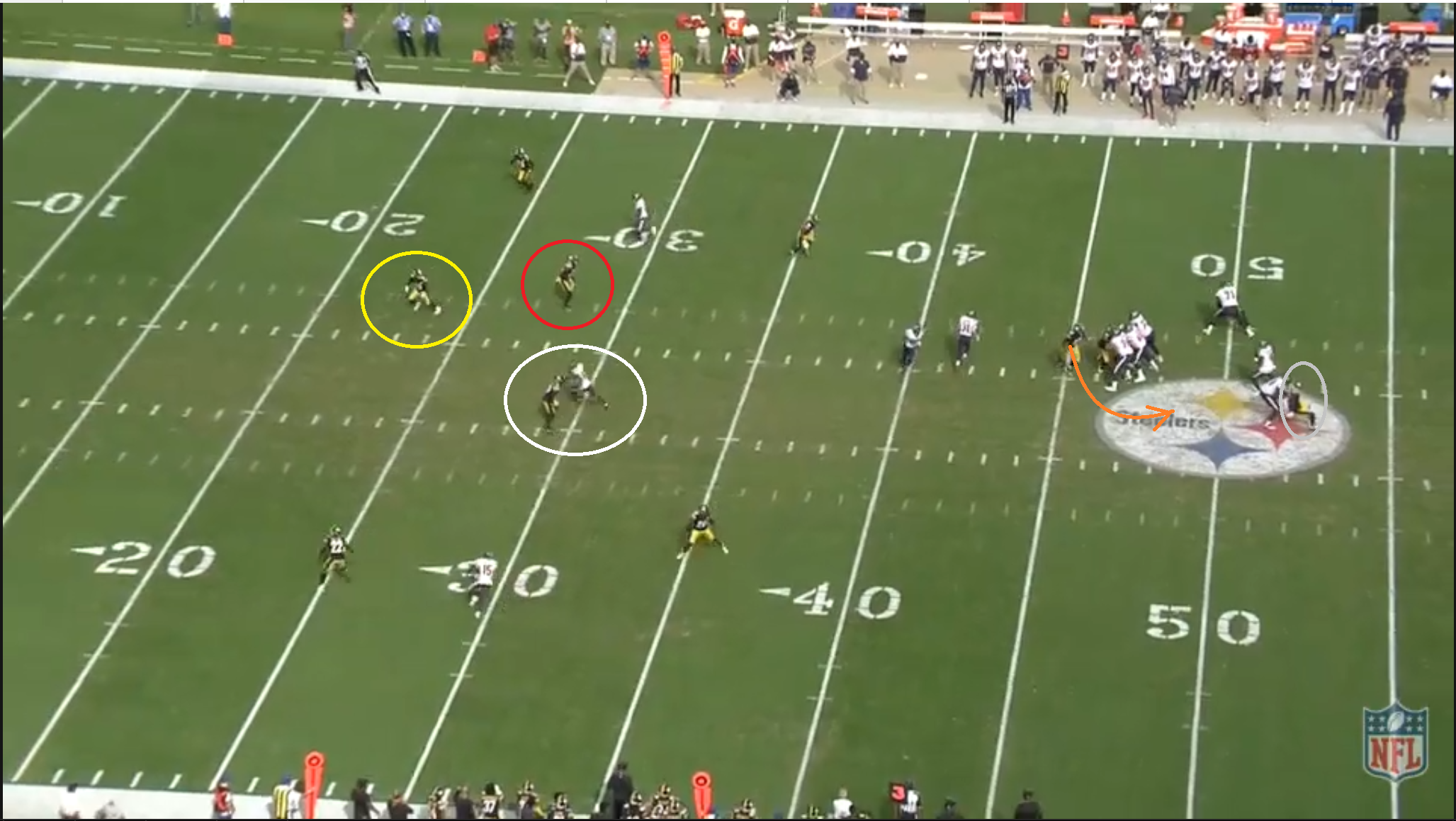 As the play progresses, the Steelers Cover 3 alignment becomes clear. Hilton (in yellow) is covering the deep middle. Minkah (in white) has stayed at the 15-yard mark with his heels on the first down line, passing off Stills to Hilton behind him. Nelson has sunk deep on the near side of the field, effectively doubling Stills. This also allows Fuller’s crossing route to carry him behind the safeties. There is a very small window for Watson to try to fit the ball in here to Fuller, but he would have to tempt luck by fitting the ball over the heads of Minkah and Edmunds. In the pocket, things have broken down for Watson. Even with just a 4-man rush, Adeniyi (in grey) has worked back around the tackle with a savvy spin move to get back to the inside. Heyward (in orange) has cut off Watson’s escape route. When Heyward came around, Watson brought the ball down and his eyes came down. With Adeniyi bearing down, Watson’s only choice is to escape to his right. 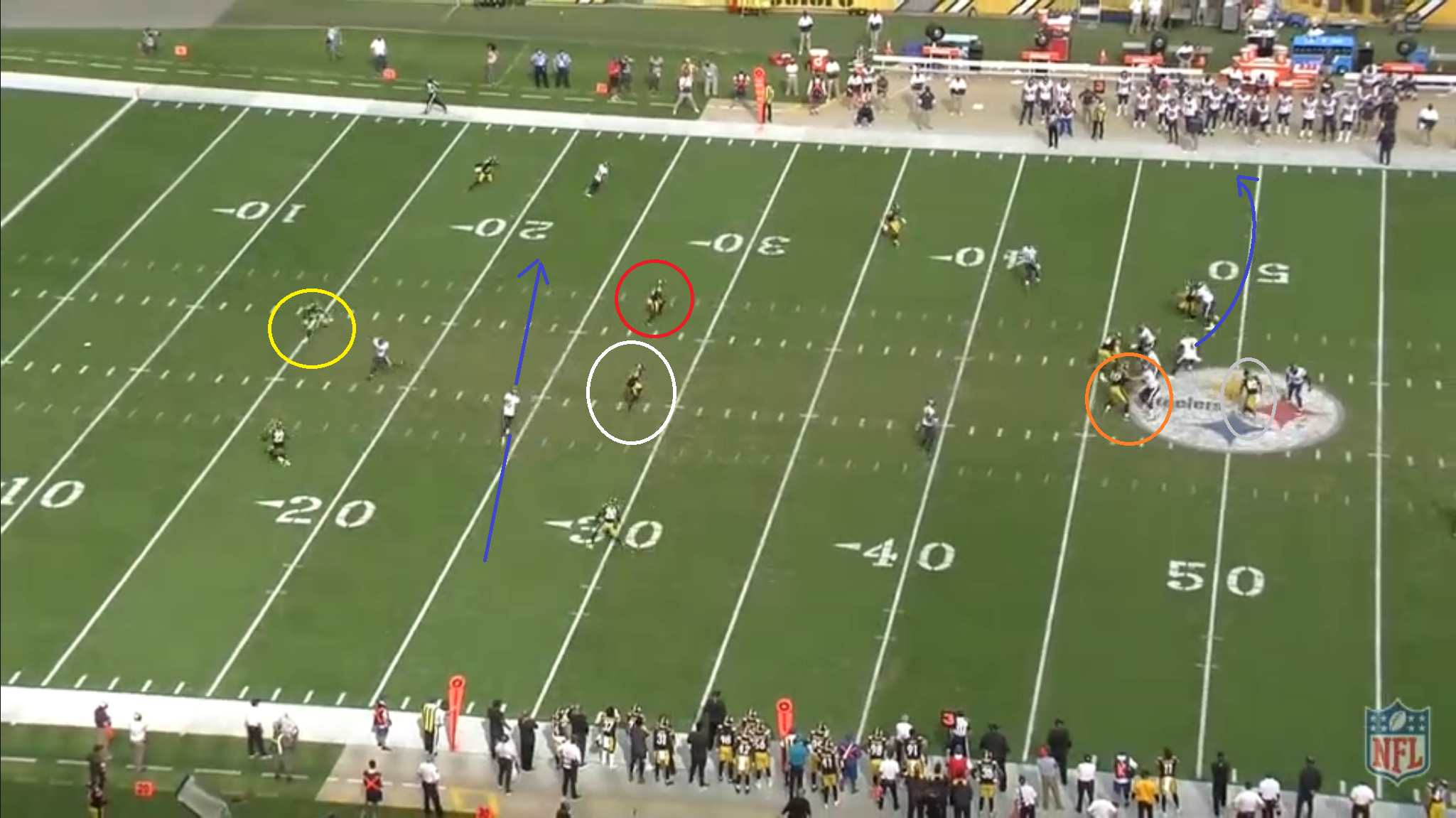 As Watson is flushed out of the pocket with Adeniyi in hot pursuit, Fuller works behind the safeties. Fuller is trying to give Watson a window to throw the ball, but this would be a difficult throw for Watson across his body as he moves right. The throw difficulty increases dramatically with the two safeties hovering underneath Fuller’s route that any underthrow almost certainly results in an interception. Terrell Edmunds makes a very good play here and mirrors Watson’s movement outside the pocket, drifting to his left to stay in the throwing lane between Watson and Fuller. As Stills reaches the top of his route, he turns back to see Watson on the run and makes an improvised break towards the far sideline to try to present a target downfield. 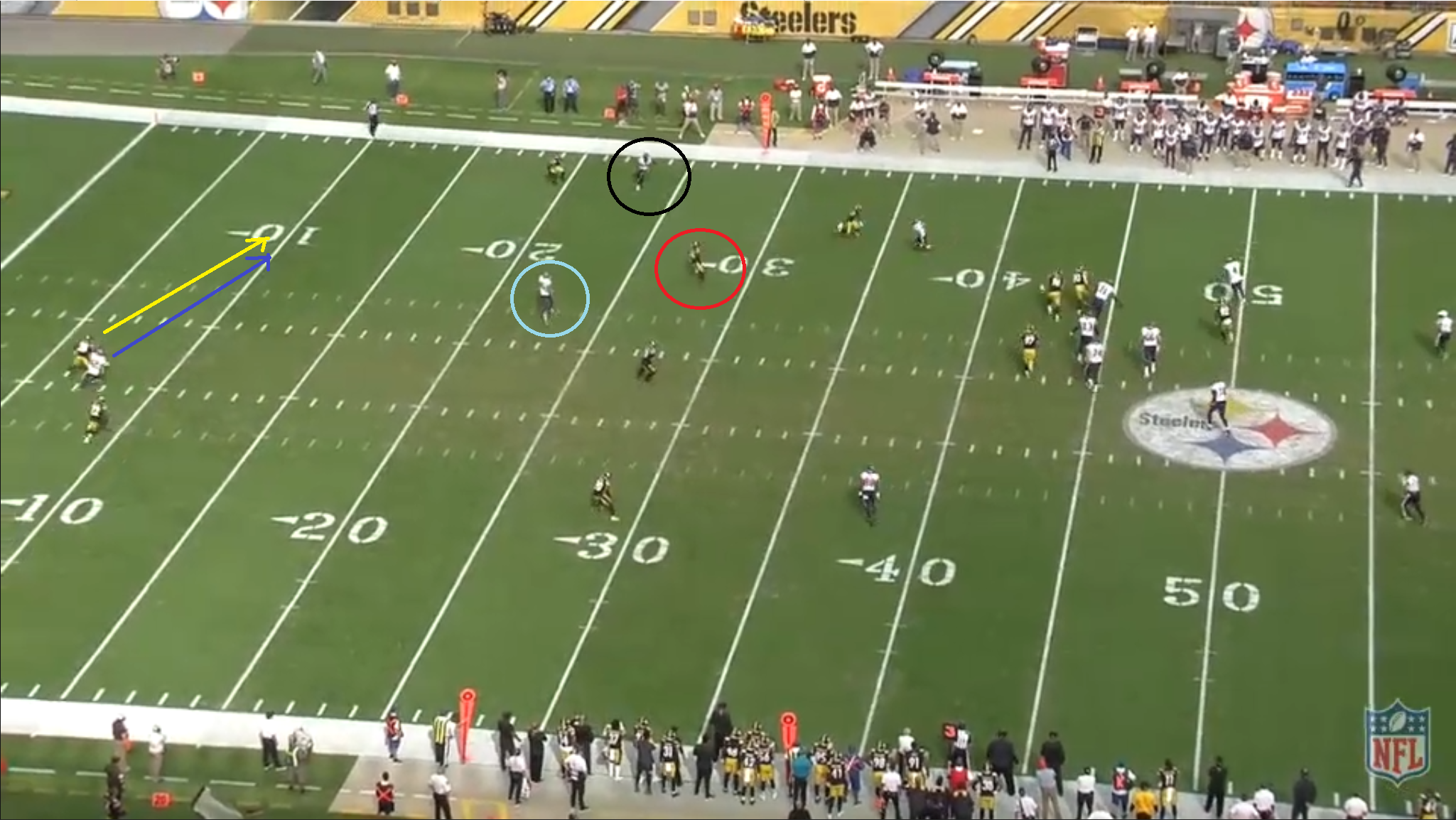 Here we see how Edmunds has followed Watson in drifting towards the sideline. While Watson was in the pocket, Edmunds was right on the hash marks. Now with Watson scrambling out to the numbers, Edmunds has followed him and is also on the numbers. Terrell Edmunds has certainly had his struggles this season, but this was a good smart play to cut down the throwing lane. Effectively, Edmunds’ movement has taken both Fuller (in light blue) and Cooks (in black) out of the play unless Watson wants to attempt a dangerous throw past Edmunds with Joe Haden still lurking back around the 20-yard line. Instead, Watson sees Stills trying to come open downfield. With Adeniyi hot on his tail and TJ Watt closing in on his face and the sideline nearing, Watson flings a prayer downfield. Hilton does a great job reading the throw and straight up beats Stills to the spot right on the numbers at the 10. 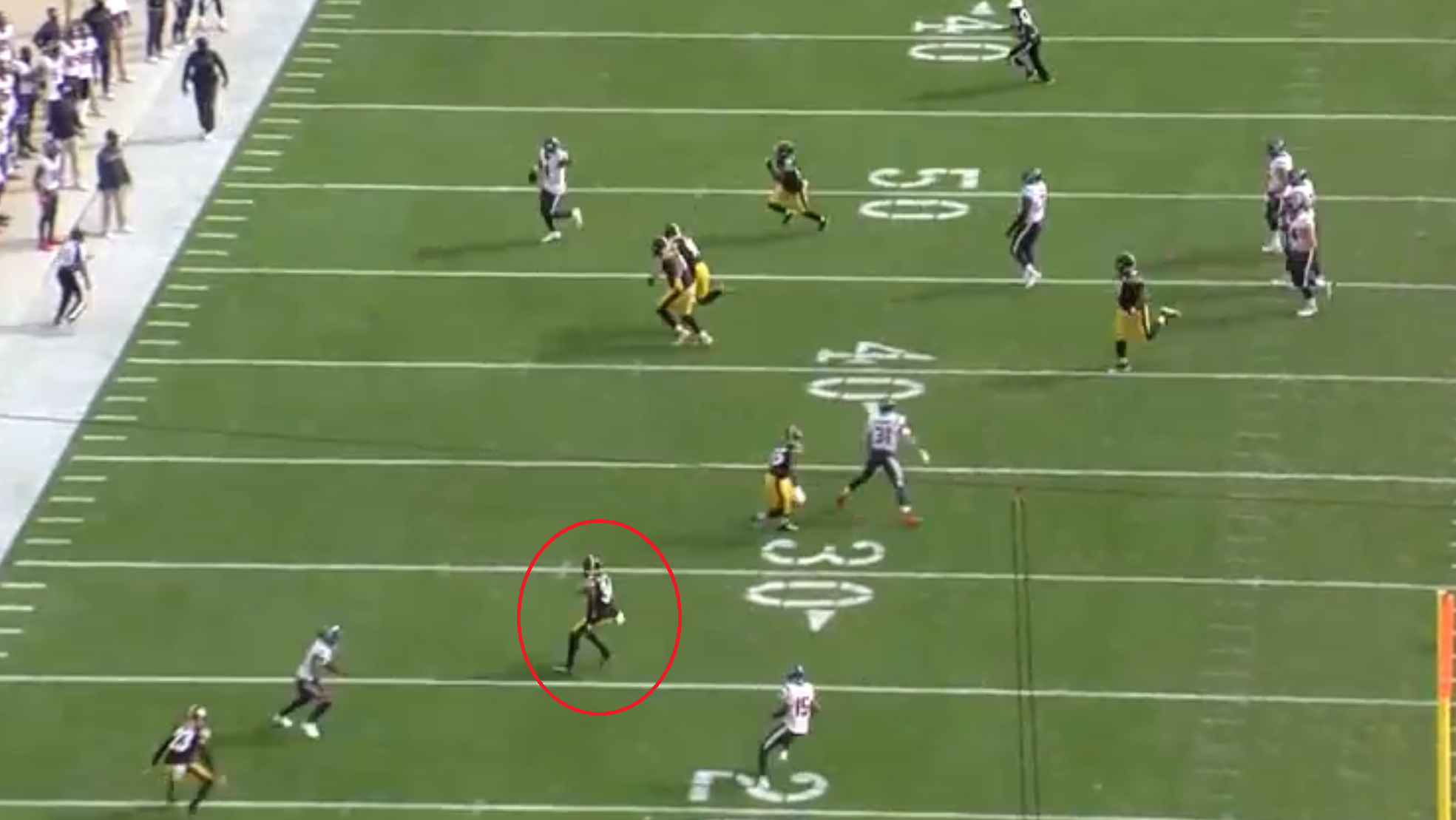 From the reverse angle, Edmunds’ lateral movement to track with Watson is even more evident. With Fuller streaking across the field behind Edmunds (in red), this matching movement keeps him in the throwing lane and increases the danger and difficulty of the throw. Effectively, Edmunds has eliminated a throw to two receivers here with his positioning. After Hilton’s interception, the Steelers would march down the field and score the go-ahead touchdown, taking a 28-21 lead that they would not relinquish and securing their 3-0 start to the season.

One other factor worth noting here – in training camp when stories came out about Mike Hilton practicing at safety, was not because the Steelers actually intended to line him up at safety very often. Rather, those practice reps gave Keith Butler the confidence to make this defensive play call where Hilton dropped deep at the snap to serve as the centerfielding safety while Minkah and Edmunds took “robber” positions underneath. The Steelers have also used this tactic with Cam Sutton as the deep safety. The ability of all of their defensive backs to play different roles on any given play further confuses quarterbacks and has enabled Minkah Fitzpatrick to work his way into different matchups – not just playing as the single-high free safety.

See the broadcast view of the play on NFL.com.

Steelers’ Off-Field Immunity is a Thing of...