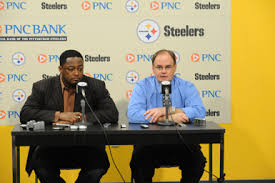 While four teams remain in the NFL Playoffs, I’m already interested in where the Pittsburgh Steelers are going in terms of the 2013 season.

Last night, my partner-in-crime and I were very excited to be joined by Shane Hallam of www.draftcountdown.com to help us breakdown some possible directions the Steelers might go during the NFL Draft in April.

Shane did an excellent job of breaking down several key positions in which the Steelers might be going including safety, inside backer, outside backer, running back and wide receiver.

What the three of us concluded was that the Steelers are in a position where more than ever, the selections made ahead of them will dictate their move as it did last year. The exception is that last season, an offensive lineman was priority number one and it worked in our favor. This year, there are numerous options available in a deep, but not overly talented draft. What that means Steelers’ fans is that you can expect to hear the inevitable ‘best player available’ moniker tossed around a lot when the Steelers are choosing and not just in the first round. Typically that phrase is used as the draft enters its’ final rounds but the Steelers have more needs than you might think.

Do you draft an inside linebacker to replace Larry Foote?

Depending on James Harrison’s contract situation, do you look for a pass-rushing outside linebacker?

Troy Polamalu has spent a great deal of the last few years on the sidelines and Ryan Clark isn’t getting any younger. Do you go with a safety?

There are currently no running backs on this roster under contract for 2013. Do you possibly pick a back in the first or second round?

What about defensive line? Will Casey Hampton be back?

If Mike Wallace leaves via free agency, do you look for his replacement with that first selection?

If Willie Colon becomes a cap casualty does left guard become the target?

See where I’m going with this people? The Pittsburgh Steelers cannot afford to dwell on one position unless something out of the ordinary happens prior to the draft like an early retirement, trade or free agent signing.

Don’t forget, Keenan Lewis will be on the market if the Steelers can’t lock him up long-term. This of course would create a need for a nickel back at the very least. It’s no secret this is an aging Steelers’ football team that must gain youth and speed in a hurry if it wants to get back to the playoffs next season.

Obviously things can change between now and April in a myriad of ways, but what won’t change is the need for the best player available at pick #17 regardless of his position.

The “Roethlisberger” Rules and Why You Should Appreciate Him More

Polamalu looks to return but credit Will...

Should the Steelers trade out of the first round for Two second round picks. Cincy has 2 picks and the value is equal to The #17 pick. Having 3 picks in the second would allow them to get a RB,Safety, &OLB

That’s a great question Robert and thanks for reading. As I sit here on the 15th on January, I don’t see a guy that we “have to have” at 17 so you’re idea has legs in my opinion. Will be very interesting going forward.

Man, this team needs a lot after reading the post. I think their #1 priority is Keenan Lewis, Ramon Foster, and everybody else can hit the road to include Wallace. If Lewis leaves, they have to look at CB in rounds 1-3. If Wallace departs, which I do expect him to, then WR in rds 1-3. They have to look at safety, unless they are considering moving Ike there. But that would still leave the CB position thin. Troy is finshed; I hate to say it, but I think he maybe have 1 good yr left in him at most.

There are several directions where the Steelers can go. I think they should concentrate on defense especially in the first two rounds. I think if Jonathan Banks is available, but he will not be then grab him. That is even if the Steelers do keep Lewis. I also like Jesse Williams and John Jenkins. The nose tackle needs to addressed in the draft. Steve McClendon should move to defensive end to replace either Hood or Heyward. I believe Keisel will be released. If they go with Williams or Jenkins in the first round then in the second round they may have the opportunity to grab David Amerson CB from North Carolina State who is big and aggressive. But I love Manti Te’o who could be available. If they go with Te’o then in the second go with Sylvester DT North Carolina or Woods DT Texas. I also like Shayne Skov OLB Stanford who might be avaible in the third.

Thanks for reading Eric. I really like several of the guys you mentioned like Amerson and Skov but need more time to see if they’ll fit in the system. I don’t know that Keisel is released but it’s a possibility as it is for several other veterans. Te’o had a bad BCS title game, but many LBs would have against that offense. If he is there at 17 he has to be worth a look.