Steelers’ Butler Could Finally Be On the Move 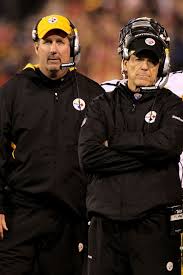 With the news yesterday that the Tennessee Titans have hired former Pittsburgh Steelers’ offensive coordinator Ken Whisenhunt speculation has started about who he will add to his staff.

Popular thought has it that Whisenhunt may seek Steelers’ linebackers’ coach Keith Butler to fill his defensive coordinator position in Tennessee.

This would not be the first former Steelers’ coach to work under Whisenhunt.

The issue with Butler leaving the Steelers is somewhat complicated.

Popular opinion has long held that Butler would be Dick LeBeau’s successor when the Hall of Famer decided to finally hang up the whistle.

That notion may have been squashed a bit during Mike Tomlin’s season ending press conference. He was asked about this very topic and made it very clear to me at least that there is no ‘line of succession’ in place.

Whether ‘Butler to Tennessee’ comes to fruition or not doesn’t matter to me. I believe Butler has more than put in enough time and deserves a shot at running a defense in the NFL.

Would the Steelers Select Ebron at Pick 15?

Steelers’ Focus Should be on Cortez Allen...

My feeling is that when the Steelers turn to a new DC, that Carnell Lake will be considered. Lake seems to be a generation younger than Butler, and that will bode well for the future of the Steelers D.

That’s a genuine concern. I also thought that Butler would be the next DC for the Steelers and he had chances to leave several seasons ago, but declined expecting as we all hoped that he would be the next DC… I would be pretty disappointed if he ended up elsewhere because he does more than deserves a shot and will make a very good DC.

He obviously knows what he is doing or the Steelers wouldn’t have made the efforts to keep him around the way they have. I’d like to see him finally become DC I just hope it’s in Pittsburgh.