Would the Steelers Select Ebron at Pick 15? 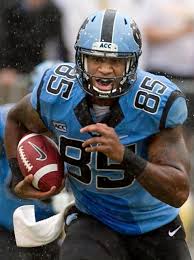 This is the time of year where I do a lot of spit-balling with potential draft picks of the Pittsburgh Steelers. Once the all-star games and combine have come and gone, I start to get a little more serious about just who the Steelers might select in the 2014 NFL Draft.

Today is one of those moments where I’m throwing something out there for you to consider. Despite the fact that tight end is not a top priority for the Steelers, I think Eric Ebron has to be taken seriously should he fall to the Steelers at selection number 15.

Just to be clear, I am NOT suggesting this at the current time. I am merely offering it as a talking point. That said, would it be such a poor pick?

Heath Miller will be entering his 10th NFL season in 2014 and it was apparent to me that he was not the same Heath Miller who we saw before the knee injury last year.

I’m not suggesting that Miller can’t return to form in 2014 but we must start thinking about his replacement sooner rather than later.

Current back-ups Matt Spaeth, David Paulson and Michael Palmer will do nothing to replace the value of Miller as both a blocker and pass catcher. Yes, Miller’s blocking fell off in 2013 but he is still substantially better than any of those mentioned in terms of an all-around tight end.

Ebron would be an impact player immediately on offense. He has been compared most often to San Francisco’s Vernon Davis as they are both big, athletic and can line up in a number of ways. His blocking will need to improve and his body could stand to add some muscle but his frame looks like it could carry that without issue.

If you think I’m advocating a multiple tight end system then stop right there because I’m not. Todd Haley has driven me nuts with his ‘heavy’ packages the last two years. What I am advocating is that if he is going to continue with this pattern then he should at least have tight ends one the field that are a threat.

Paulson, Spaeth etc. don’t scare anyone but Ebron would be a match-up nightmare for most defenses.

The Steelers have very strong needs for guys on the defensive line and in the secondary and I recognize this. I’m merely stating that the selection of Eric Ebron should he drop to 15, would be just fine with me should things unfold that way.

Steelers’ Butler Could Finally Be On the Move

Setting the Record Straight on Roethlisberger’s 2012

Steelers’ Secondary Issues Are Not an Overnight...

I’ll play devil’s advocate and say I’m not a big fan of any TE in the first round. (For the record I understand you’re not advocating the pick, just adding to the discussion here). I didn’t mind the Heath pick because it was the very end of the round, and we were pretty stacked at the time… Heath was a luxury pick… And Ebron would be too.

None of those guys are first rounders.

Is that second group any better than the first?

I guess I just view the TE position the same as RB, where they’re not all that hard to find, so positional value in round 1 isn’t all that great.

You make very valid points Chris and like I said I don’t think they’d go in this direction anyway, but the thought of him being able to line up tight or wide in a variety of sets makes him very appealing.

I say just go with K.Benjamin… The dude is basically a WR in a TE’s body.

I’m going to throw a name out there , Justin Gilbert CB OK. ST.. It’s been a long time since we’ve had a true CB with hands and this kind of skill level. For what it’s worth that’s my 2 cents.

Through your two cents in any time Bob! I’m starting to hear his name a lot more. Once the NFL season ends I’ll start watching some more video of all these different potential picks.

Has everyone gone nuts or what? I know why you the fans want a “Athletic TE”, you see teams like the Bengals. Ravens and Pats running that way as well. So lets look at those teams more closely shall we: Pats had Gronk and Hernandez for 3 years and look at them now. Robo Gronk is always hurt and Hernandez is in jail and is not getting out anytime soon so now they have become a power run team. Ravens have Pitta and Dickson but what good can they do if they are being covered more than before with the loss of Boldin. Now look at this team, they have no NO.2 WR and there TE’s cannot get free and if they do Flacco’s line just can’t seem to hold up. Now for the Bengals, there TE’s are Gresham and Eifert. Both are good TE’s no doubt about it but there running that type of system cause other than Green who else is coming up to relive pressure for Green? you can say Sanu, Jones and Hawkins but in all honesty what exactly have those 3 guys done for the Bengals? You would rather ignore WR in favor of a TE? Miller is fine enough as is and for the others there just the occasional catch type of guys so why mess that up? If I see the Steelers take a TE which they do not for at least a few more years and no I’m not joking or kidding about that, it means that in there minds if 3 other teams can do it why can’t we.