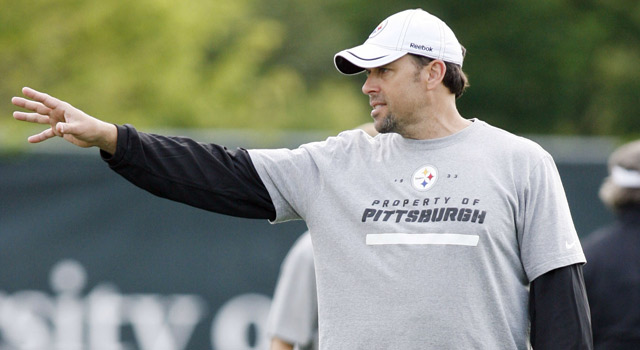 You love him, you hate him, you tolerate him. Yes my friends, that’s Pittsburgh Steelers’ Offensive Coordinator Todd Haley. Brought aboard in 2012 after the unusual “forced retirement” of Bruce Arians, Haley’s job was of course to come in and ‘tweak’ the game of Ben Roethlisberger.

In terms of sheer numbers, he’s been able to do that, but in terms of wins, third down efficiency, play-calling and red zone success, there’s been a lot left to be desired in my opinion. Because I know everything there is to know about offensive football (OK, not all but pretty damn close) I decided it’s time to give Coach Haley my ‘to-do’ list for the upcoming season

Stop Trying to Prove You’re the Smartest Guy on the Sidelines Sometimes Haley will call four or five outstanding plays in a row. They are well-executed, well-designed and they catch the defense perfectly off guard. But then, as if taken over by some extra-terrestrial being, he calls a play which makes little if any sense.

For example, the Steelers have moved the ball effectively to the opponents’ 38 yard-line with a nice mixture of run and pass and they have a first and ten. Why then call an end around? That doesn’t make good sense to me. I’m a firm believer in “keep doing what works until they can prove otherwise.” It’s really not a complicated formula and Haley needs to stick with it more often.

Get More Organized in the Red Zone Ever notice how often Ben Roethlisberger is forced to take a timeout once the offense gets inside the opponents’ 20 or 30 yard-line? It’s almost like clockwork. The offense moves down the field with the precision of a surgeon and then wham! Cardiac Arrest!

Part of the reason is that Haley is constantly tinkering with personnel. That’s all fine and good but if you lack the ability to get the proper personnel on and off the field in a timely manner then you just can’t do it. Roethlisberger is not overly demonstrative for the most part but you can see it in his face when he’s forced to call a timeout simply to avoid a delay of game penalty. This has to get better this year.

Third Down Efficiency Needs Some Work In 2015 the Steelers ranked 17th in third down efficiency. With 193 such opportunities, that was the least attempted by any team in the league other than Dallas. In 2014 the Steelers ranked fifth, in 2013 they were 14th and in 2012 they ranked 10th. These are not the worst rankings in the world but for a team with so many options on offense they should be much closer to a 50% conversion rate.

On third down and less than five, I think Big Ben needs to pick his deep shots more carefully here too. Sometimes it’s better to take the first down rather than go for the big play. Haley needs to make sure the two are on the same page in this regard.

Red Zone Touchdowns Could Use an Increase Too Here are the ranks for the Steelers’ offense under Haley when it comes to scoring red zone touchdowns. 2015 – 13th, 2014 – 19th, 2013 – 16th, 2012 – 12th. Out of 32 teams those numbers aren’t terrible but I don’t find them real solid considering the offensive talent. Is it all on Haley? Not necessarily because players have to execute but I also believe it’s Haley’s job to put them in the best possible positions to thrive. Anything outside of the top ten here is unacceptable in my book.

Stop Talking About 30 Points per Game For the last couple of preseasons we’ve been inundated with comments about how this offense can easily score 30 points per game. So far the best the offense has done under Haley has been 26.6 which is nothing to sneeze at. But… take care of the things I’ve mentioned above and 30 won’t be a problem. Better yet, what the Steelers can do against the better defenses in the NFL is more important than scoring 30 points per game.

One Final Thought While I was ready for change when Arians was dismissed Haley was not a guy I wanted. Unfortunately that wasn’t my call so like all of us, we deal with the cards we are dealt. That’s Todd Haley in a nutshell for me.

One Final, Final Thought Don’t ever, and I mean EVER put an offensive lineman in a situation where he’s lined up as a split end. We saw him do it with Mike Adams and then again with Alejandro Villanueva. It’s even worse when they have to run routes.