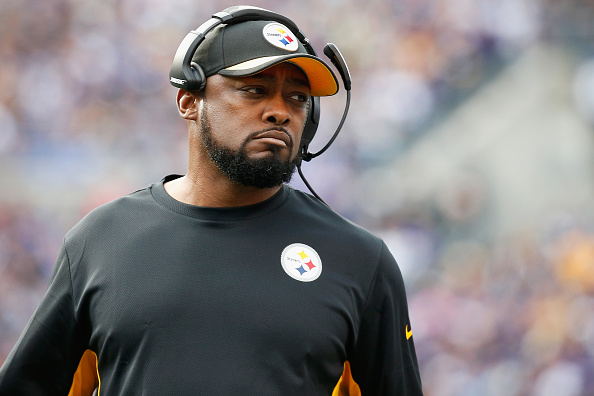 After nine years of getting to know Mike Tomlin, I think it’s pretty clear the image we have of him as the head coach of the Pittsburgh Steelers. But is this image changing?

I’m not referring to the way he looks, (he still wears some pretty sweet kicks though doesn’t he?) Rather, I’m talking about his approach to this season so far in 2016.

During his weekly press conference Tuesday, he declared Ben Roethlisberger, Antonio Brown, LeVeon Bell and DeAngelo Williams all “out” for Thursday’s preseason game against the Philadelphia Eagles. Maurkice Pouncey, who didn’t play last week, will suit up for the Steelers.

This is where I believe Mike Tomlin has shown change and growth as a head coach. In years past, the players listed above would have suited up and played in the preseason. Maybe it would have only been one series or a quarter but they likely would have played.

The approach has obviously changed for Tomlin and think it’s a huge step in the right direction. As he pointed out in the presser, there is nothing to be gained by playing any of these men. The exception with Pouncey is simply because it’s been so long since he’s seen game action. I don’t expect him to play a lot anyway.

The risk that Tomlin runs of course is second-guessing. Already there are fellow bloggers of mine saying things have gotten too soft and that Tomlin’s “maintenance days”  for veterans are unwarranted but that’s their opinion and they’re more than entitled to it. These are the same people however who will bitch when someone important goes down with an injury in a meaningless preseason game but hey… You can’t please everyone.

The more accurate second-guessing will come in a form like this. Let’s assume the players he’s holding out this week play one game in the preseason. Then in the season opener they all look rusty and perform well below what is expected. The media and fans will say that Ben and company didn’t play enough in the preseason and that’s why they were rusty.

If that’s the biggest issue then I’ll take it. I’d rather the top players were “rusty” for a week than injured for a whole season. Is Tomlin’s new approach risky? Sure it is but what decision made by an NFL head coach isn’t these days?

After nine seasons I think Mike Tomlin has earned a little leeway. That doesn’t mean his clock management and certain personnel moves won’t drive me insane for a tenth season, but I’m not going there right now. My hope is that Tomlin’s approach pays off. If it doesn’t, I’m sure there will be plenty of people willing to tell us about it.

[…] Steelers’ Head Coach Mike Tomlin was asked about the team’s position with regard to James Harrison. Harrison as you know has been told he needs to meet with NFL investigators by the 25th of August or he’ll face suspension. Tomlin’s approach is that he nor the team have any need to be involved. It’s a James Harrison issue and James Harrison will deal with it. That was the gist I got. […]

[…] Steelers’ Head Coach Mike Tomlin was asked about the team’s position with regard to James Harrison. Harrison as you know has been told he needs to meet with NFL investigators by the 25th of August or he’ll face suspension. Tomlin’s approach is that he nor the team have any need to be involved. It’s a James Harrison issue and James Harrison will deal with it. That was the gist I got. […]