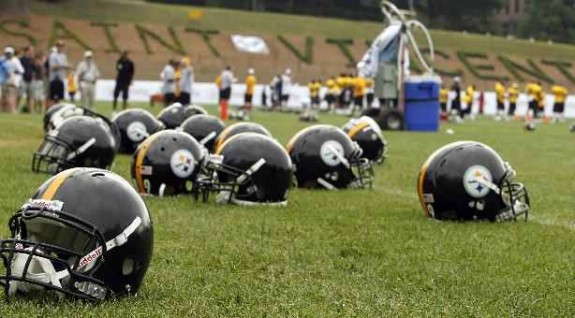 The biggest news, depending on your viewpoint, didn’t happen on the fields of St. Vincent College. Rather, the Steelers announced that General Manager Kevin Colbert will not renew or extend his contract prior to the season. This is a bit surprising especially after Mike Tomlin just saw his contract extended by a year. According to Gerry Dulac, this decision was Colbert’s. I’m not going to read too much into this right now. At some point Colbert will retire but I’m not going there yet.

As you probably know we have several people on hand at Camp during the days none of us can be there. We also have some great fans like Monica and her husband who were kind enough to share some great photos of their trip to Camp so far. The photos are mixed in as you go. Follow her on Twitter @MLouden87 for some more great pics. 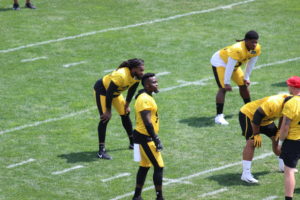 Mark Barron and Devin Bush. These two could be lined up next to each other a lot in 2019.

-Zac Gentry looked more athletic than most have expected. He made several good catches and looked vastly improved running his routes. The curiosity comes from whether he will be able to block. His tall (6’8″) frame made our observers wonder how will he can get is body into good blocking position.

-Compared to Ryan Switzer and Diontae Johnson, Eli Rogers didn’t look so good in the slot. Their speed was the major difference. Rogers appeared slow and at times, sluggish. 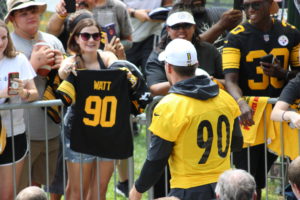 What must it be like to see someone THAT happy to see you?!?!

-Tough start for Josh Dobbs who threw a couple of picks in the team’s first ‘Seven Shots’ Drill.

-Rookie Sutton Smith was very impressive off the edge. He used quickness and leverage several times to his advantage.

-Another rookie who showed well was UDFA Safety P.J. Locke who looked very good during his time on the field. Locke has to prove he can cover consistently well in order to have a shot at making the team.

-There was some misunderstanding last evening about Diontae Johnson’s conditioning test. Early reports suggested he ‘barely’ made it. The truth as I understand is that he did just fine. Someone apparently mistook his heavy breathing as him being out of shape. 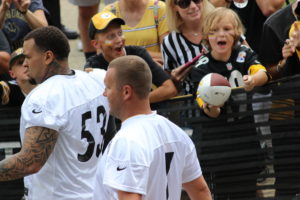 I thought I was the only one who got this excited when Ben and Maurkice are nearby.

Congratulations to new Steelers’ Hall of Honor inductees Hines Ward, Bill Cowher, Larry Brown and Elbie Nickel. These men are all deserving. They’ll be inducted later this season at a Steelers’ game.

Tomorrow will be officially the Steelers’ third day in Camp which means that Artie Burns will be due his $800,000 roster bonus. I see little reason this won’t happens now which pretty much guarantees his spot on the roster. Rather than complain about it perhaps we can all instead root for the young man to have a bounce back season. After all, if he plays well it helps the team as much as it helps him. I have my doubts but that doesn’t mean I don’t want him to succeed. 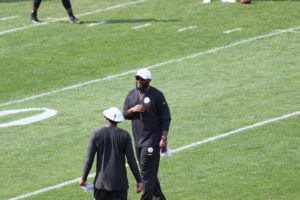 We’ll have more from Camp as it rolls along!