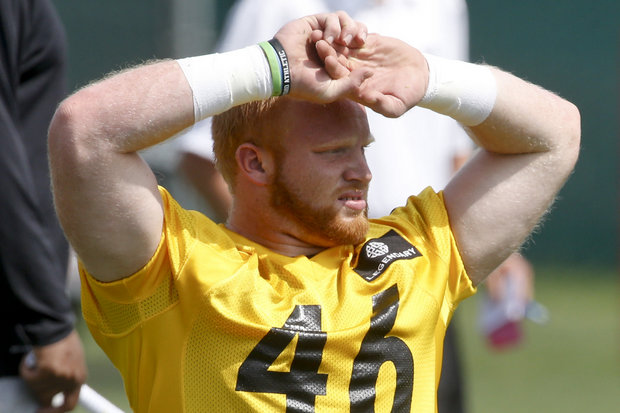 The first preseason game hasn’t even been played yet but the battle for the Pittsburgh Steelers’ roster spots at linebacker is as intense as any game could be.

The competition here was already going to be a battle of epic proportions but now it appears things have been ramped up even more. Guys like L.J. Fort and Anthony Chickillo having really good camps  but so too are Arthur Moats and rookie Tyler Matakevich.

“Dirty Red” as Matakevich is known was the star of the show Friday night at Latrobe Memorial Stadium. He’s already proven in camp that he’s a solid linebacker between the tackles but then under the lights he put on a pass rushing display that had Head Coach Mike Tomlin very excited. His array of spin moves left opposing blockers whiffing at the air and his fellow defenders in awe.

The problem for Matakevich is can he find a spot on this roster? I feel very confident when I say that if he doesn’t he will be picked up by someone before he ever hits the Practice Squad.

In what has to be troubling for many is the decline of Lawrence Timmons. His time has been limited in practice more than I can remember and that has two possible reasons. One is that as a veteran, he’s getting deserved rests. The other is unfortunate because it means his regression is in full swing.

At practice on Saturday, Timmons was beaten badly by both Eli Rogers and Jesse James. Timmons’ coverage skills overall have been average at best in recent seasons but he’s also started to miss more tackles too.

Ryan Shazier and Vince Williams have both been solid in camp so far and I haven’t even touched on Jarvis Jones, Bud Dupree or James Harrison. The battle going on is what you want to see as a coach but making the decision on who to keep is made all the more difficult.

Money, injuries, versatility and ability to play Special Teams will most certainly factor in to the decision-making  as the preseason winds down a few weeks from now. All I can tell you is that some very good football players won’t be on this roster.

[…] be really good at the linebacker position and it’s been even more competitive than thought (I wrote about it yesterday). But it isn’t just the usual suspects that are going to make Mike Tomlin’s decision so […]

[…] just so happens that the Steelers’ deepest position might be the ILB position, as Marc discussed earlier this week here and I highlighted a couple in discussing the Steelers’ young […]

[…] just so happens that the Steelers’ deepest position might be the ILB position, as Marc discussed earlier this week here and I highlighted a couple in discussing the Steelers’ young […]