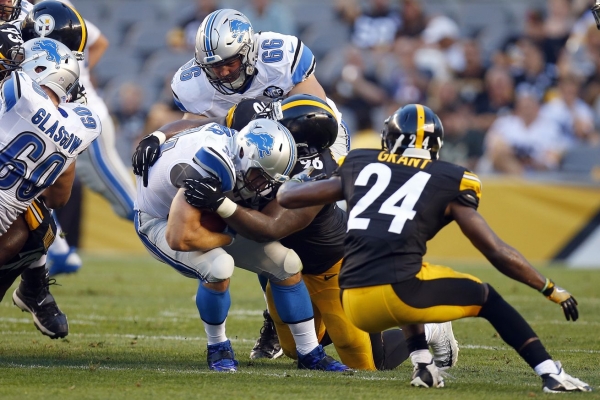 The game of football really isn’t as difficult as some would make it out to be. You block, you tackle, you win. The problem is that when you take one of those two out of the equation then we’ve got a problem and that’s where the Steelers find themselves again in 2016.

In last night’s preseason loss to the Detroit Lions, the missed tackles began early and continued all evening. The biggest offender early on was rookie Sean Davis who missed several tackles before redeeming himself later on. Second-year defensive back Doran Grant had a pick-six but also came up empty when he couldn’t bring down a receiver ahead of the first down marker.

Those are just two examples and they certainly weren’t the only ones. Head Coach Mike Tomlin pointed out the missed tackles in postgame presser as well he should have.

“On defense, I don’t think we did a good enough job on third down. Some of that was coupled with poor tackling. The tackling was not up to snuff, especially on possession downs.” (h/t Triblive)

This has been an ongoing issue for a defense that once prided itself on being the best tackling unit in pro football.

Why the decline? There are several things to point at. With less time in both Training Camp and practice in general for contact it’s only natural to lose proper tackling techniques. It’s also important to note that as ‘player safety’ becomes an overriding issue in the game that defenders are struggling with just how to tackle without drawing flags.

Besides not hitting helmet-to-helmet defenders also have to be even more careful with horse collars as well. New rules there make it easier for officials to flag defenders who grasp not just the back of the shoulder pads but also even if they just grab the nameplate.

All that is fine and well because the Steelers, like every other team, have to overcome and adapt to the rules. The tackling can’t stay like this through the season. Am I overreacting following just one preseason game? I don’t think so.

This has become a recurring problem in recent years and it cannot be something that dogs this team again. Whether they need more time on the dummies, the robots our each other I can’t say but the tackling has to get better.