As you can see, Quick Hitters has a bit of a different look today. It’s the premier of QH with new sponsor Dr. Brent Shealer! He’s a Pittsburgh Area chiropractor and a great follow on Twitter @drbrentchiro. Really excited for this!!

The Steelers have had their first significant injury of camp. Second year cornerback Senquez Golson was carted off the field yesterday with a foot injury. I’m told he’ll be back in Pittsburgh today for an MRI. This is horrible news for a guy who missed all of his rookie season with a shoulder problem. If he is gone for an extended period of time then the secondary will be re-shuffled.

There were a few national NFL guys in Latrobe yesterday and among them was Albert Breer. He tweeted out the following.

The Steelers are knocking the absolute —- out of each other. This is the most physical practice I've been to in a couple years.

Personally, I like the fact the Steelers were getting after it. There are so few opportunities to do that anymore with the way the CBA is so I say “get after it.” This sets the tone for the rookies and new guys can expect right away.

Tweet of the Day #2…. Very cool pic for this young man!

Rookie Javon Hargrave continues to shine. He was the first team nose tackle in the 3-4 on Monday and had several explosive plays. His presence could be such a huge asset to this team.

You know a guy is well-liked when the team sings “Happy Birthday” to him. That’s exactly what the Steelers did for DeAngelo Williams yesterday. DWill turns 33 today.

The Steelers are off today by the way which is why they sang to Williams yesterday. 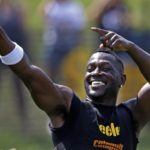 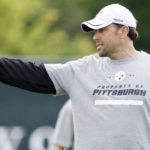