Joey Porter is Back in the Burgh 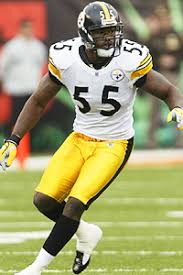 The Pittsburgh Steelers announced earlier today that they have hired former Steelers’ linebacker Joey Porter as a defensive assistant.

Porter played eight years in Pittsburgh and recorded 60 career sacks. He would later spend time in Miami and Arizona before retiring.

I’m going on the record right now by saying I love this hire. Porter was an emotional and fiery leader of the defense who brought attitude and swagger and both of those things are lacking on this current version of the defense.

As far as I’m concerned, Porter doesn’t have to do any coaching. He can just be the ‘Matt Foley’ of the team.

If you don’t get the reference, Porter can serve as the ‘motivational speaker’ for not just the defense, but the team as a whole.

It’s assumed that Porter will work primarily with linebackers and with a group of young guys which includes Jarvis Jones, Vince Williams and maybe Jason Worilds, his knowledge and experience will be welcomed.

I also hope this is a positive step for Porter who has had financial and legal issues over the last several years. Being back in the organization should be a good step in the right direction for him.

Joey Porter is Back in the Burgh was last modified: February 11th, 2014 by steeldad
Joey PorterNFLPittsburgh Steelers

Are The Steelers Ready for a Gay Player?

A Look Back at the Steelers 2013 Draft Class

Ryan Clark Is The Smartest Man in...