Is the Steelers’ Draft Coming Into Focus? Maybe…. 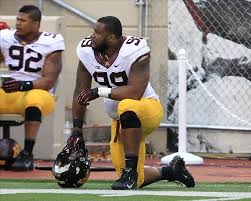 We are now less than two months out from the May NFL Draft. While much is sure to change over that time, the early days of free agency may be allowing, or forcing the Steelers’ draft plans to come into focus.

With Ziggy Hood now in Jacksonville and Al Woods signing with Tennessee, the Steelers’ need for defensive line help has grown immensely.

The secondary has added depth with Will Allen re-signing and the free agent addition of Mike Mitchell but is there still a need there?

Those two areas now have to be extremely high on the Steelers draft board as we discuss it on March 13th. Despite the additional help in the secondary, I believe that safety and especially corner are still viable options in round one.

That means Justin Gilbert and Darqueze Dennard remain possibilities. The defensive line will be a more cluttered issue because of fit and value of players available.

Does Ra’Shede Hageman suddenly become an option at 15? The defensive end from Minnesota has all the intangibles but can run hot and cold.

Because free agency lasts for several months, things will change. The Steelers may also feel that cornerback or safety can wait because of the depth of the position in this draft.

I do believe the draft is starting to clear up a bit but there is still a lot of time to go yet.

The ‘Skinny’ on Cam Thomas Who Visits the Steelers Friday

For a moment I thought that both Woods and Hood will succeed in there no homes but that ain’t going to happen. One thing that everybody should know by now that once someone leaves the Steelers for other pastures they end up failing in there new homes. Look at guys like Holmes, Porter, Mendenhall, Spaeth. Yes I know that Spaeth is not great to begin with but my point is this: Why should fans be scared of what those guys will become in there new homes? Think about it for a little while and then tell me if i’m wrong. Yes there DL needs help and depth but that is not going to happen overnight even with the draft. Until the 1st preseason game hits there will be more guys that come in and could be signed to deals. Like today there going to meet with Alex Carrington and maybe they sign him and maybe they don’t just the fact there looking at the guy is more than enough for me no to be worried.

I believe the Steelers need help in many areas, what is starting to concern me is. How are they going to pressure the QB?? Our front 7 doesn’t appear to be very good [i’m trying to be honest] . I know many people have the Steelers picking a corner in the first round if we don’t, i feel Bradley Roby would be a great pick-up in the second round.

They have some of that already set. Heyward, McClendon, Jones, Worilds, Timmons and the combo of Williams, Spence(if healthy) along with Garvin and Wilson. I know that the last few guys I mentioned are not that good but given enough time with Porter they should be more than enough to help on the inside. Kiper goes out and does his 3.0 mock draft and has CB at 15 for the Steelers and Evans at 10 to the Lions which makes no sense. Tell me something people if you pay a WR 31 million to play opposite of your No.1 WR why in the world would you draft a WR who plays the same spot after you just paid someone else to play that spot?

I believe the group you just mentioned above would have had fewer than 20 sacks between them last year and that’s 9 players. I still feel the same way, where / how are we going to pressure the QB.

Well gentlemen I think you’re hitting on one of the most pressing issues heading into the season. Where does the pressure come from? I don’t care how good the corners are if there isn’t pressure forget about it. The other troubling issue is whether LeBeau will allow himself to stray from his usual routine. Will he get creative and bring pressure in ways he hasn’t before? Something has to give.

With the Mitchell acquisition, picking a free safety rotates to the bottom of the “need” list. Drafting a CB relatively high to learn from Taylor & Lebeau and take over next year seems a no-brainer. But NONE of the mock drafts have either Gilbert or Dennard available by 15. Most agree Ebron will fall that far and we’d be nuts not to grab him. If we can get Desir at CB in the third (chancy since NE likes him), Round 2 is open.

Steelers D Line was always good at occupying O Lines while it LBer’s mop up. I know things appear iffy however the Steelers will prevail in short time. There prideful as such. Very intelligent staff players with the fight of a lion even if there wounded and going down. It feels like this draft will be pretty good one for the Steelers. ..

I’m surprised no one is talking about Aaron Donald from Pitt as a possible 1st Round pick for the Steelers. ACC Defensive Player of the Year, Lombardi Award, Bronko Nagurski Trophy, Chuck Bednarik Award and Outland Trophy winner. Just saying. If you ask me, he’s worth a hell of a look, and he should be on the board when the Steelers are on the clock.

Thanks for reading Dean. I don’t know of anyone who doesn’t think the world of Donald. He has been very impressive throughout college and through the combine. The problem for the Steelers is ‘fit.’ To play him at nose tackle wouldn’t fit the 3-4 scheme. At 6’0″ he is about the right height but at only about 285lbs, that’s way too light. Those who think he could play DE in the 3-4 aren’t thinking of past DE’s in this system either. Typical LeBeau DE’s are around 6’3″ or taller and are around 290lbs and up.

Personally, I think if a kid can play then you make a spot for him but the Steelers just don’t see him that way.

Wow! Finally, someone talking my language. Without pressure on the QB, even the best DB’s fail to cover the WR’s. I’m so frustrated hearing ‘Analysts’ and GM’s putting a player’s height and weight ahead of his playing ability. Donald can flat out play. We should draft him. I would even go so far as to grab Rasheed Hageman in the second round if he’s still available.

If the Steelers take Donald he would have to play out of position on the D-Line but to you people you don’t want to hear that, instead you chose to say ‘take him he will play real well for this team”. As for Ebron why is everyone so freaking enamored with this double TE receiving threat? I see nothing but bad things if they went that way. If you take him answer me this question: what exactly was the point of resigning Spaeth if your going to make him a 3rd TE? you all mention how NE did it well you know why don’t the Steelers copy everything the past do on offense. Lets get rid of Brown and Bell and have Wheaton catch more than 50% of the passes Ben throws. How about having a RB by committee every week of the season and lets have a TE who always gets hurt just so he can maybe create matchup problems. Is that what you fans want or do you want to see this team actually win and be happy with Miller and Spaeth as your 2 TE’s? I’m sick and tired of everyone saying lets draft Ebron and create the matchup problems they way NE did. Let me ask you this where is that 2TE offense now for NE or for that matter in Baltimore. The ravens have more faith in Pitta than they do in Dickson. So explain to me why go for TE when you a have a Big Need at WR opposite of AB. Ebron is a TE not a No.2 WR get that straight. Why ignore WR and take TE and don’t say were not saying ignoring WR cause the way you talk about these TE threats you really want hem more than you do WR and don’t try to tell me otherwise I’ve gone to a number of different of website that talk about football and all I see is fans wanting these TE’s that the Steelers don’t need instead of taking a Tall WR which is more of a need than TE. That comment is not made up go to http://espn.go.com/blog/pittsburgh-steelers and look for the Feb 19th quote that’s posted there and here is an exact time 3:15 p.m.