What a Ride These Steelers are Taking Us On 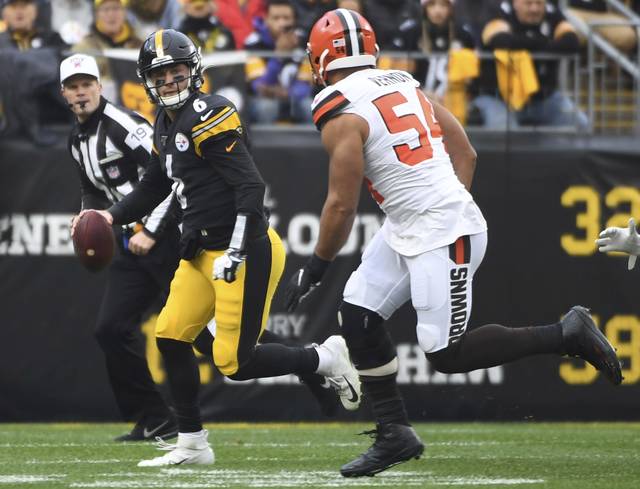 Whether you prefer to think of roller coasters, water slides or just a merry-go-round, whatever the case, the Pittsburgh Steelers have taken us for one hell of a ride in 2019 and today was no different in their 20-13 win over Cleveland.

The First Twist and Turn

They trailed 10-0 at one point in the first half and had a grand total of nine yards in the second quarter. Then Devlin “Duck” Hodges started to heat up and he got some help from guys like James Washington and the comeback was on. One Chris Boswell field goal and incredible touchdown catch by the aforementioned Washington later and the Steelers and Browns entered the locker room tied at 10.

But just prior to the halftime break Bud Dupree delivered a blow to Baker Mayfield whose hand came into contact with Dupree’s helmet. Mayfield would miss two snaps and return to play the second half with his throwing hand wrapped and in a glove. Clearly the momentum had swung to the Black and Gold.

The Hills and Valleys

The Steelers’ defense was as advertised today with five sacks and several big hits on Mayfield. They gave up 106 yards on the ground but never seemed to be in any fear of the Browns’ offense once the 10-0 deficit had been erased.

T.J. Watt, Javon Hargrave and company were terrific in terms of pressure and limiting the Browns from getting momentum on offense. They once again limited Odell Beckham, Jr from being a factor and despite a score, Kareem Hunt wasn’t the playmaker some expected.

The Steelers forced the Browns into a long field goal situation and they instead quick snapped to the kicker who hit a brilliant punt to the goal line. This is where we saw the first of two significant officiating blunders in the final stanza. The Browns kept the ball from entering the end zone but the player who did so was partially in the end zone while touching the ball which was at the one. Mike Tomlin correctly challenged the call but the call stood which elicited a “that’s wrong!” comment from CBS’ Dan Fouts.

The Steelers would hang tough though and they moved the ball to mid-field before punting it back to the Browns. On second and ten, Dupree again crushed Mayfield just as he released the ball incomplete. The head official threw a flag for unnecessary roughness which was again the incorrect call.

But as the ride was still in doubt, former Brown Joe Haden pulled it safely into the station with an interception to seal the victory. I do not know where or when this ride ends but this team is deserving of our praise. From 0-3, to 1-4 to 7-5 and all with backup QBs, RBs and WRs this team has taken us all on a terrific ride and where it ends I really don’t care now. This team had every reason to remain dead in the water but didn’t and it’s a credit to the players, coaches and the guy manning this ride Mike Tomlin.

[…] Ravens depending on playoff positioning. If Mike Tomlin’s team has learned anything in this roller coaster season, it’s that you take things one game at a time. When you deal with backup quarterbacks, […]