Fichtner Remains the Offensive Coordinator? Then Things Have to Change 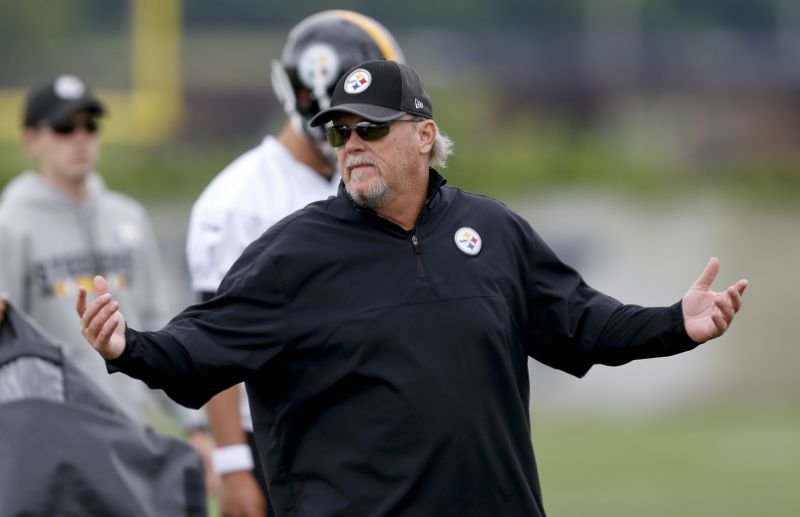 It’s not as easy as saying “Ben will be back at QB so everything will be fine.” Maybe I’ll be proven wrong but there’s no way that any of us can hang our hat on a fully recovered Ben Roethlisberger to carry Randy Fichtner in 2020.

Earlier today, ESPN’s Jeremy Fowler reported that all signs suggest that Fichtner will retain his job as the Steelers’ Offensive Coordinator. This flies in the face of one of my offseason predictions but I’m not going to throw in the towel just yet. I say that because I’ve seen this movie before. “Much maligned coach is retained by the team but really doesn’t have the same role.” I still contend there’s enough time to re-install Fichtner as the Quarterback’s Coach only and have someone else run the offense but today’s development doesn’t look good for that idea.

If Fichtner is indeed going to be the primary play-caller and gameplanner then some things have to change. For sake of argument let’s assume Roethlisberger is ready to go for the season. That in and of itself helps Fichtner a ton but doesn’t get him out of the woods. The Steelers have transitioned away from the high-flying days of the Killer B’s and that needs to continue. We cannot and should not expect Big Ben to throw the ball 40 times a game. A running game is an absolute must in 2020. Don’t think so? Look at the final eight teams in the postseason. They all happen to be the top running teams in pro football.

But Fichtner has to show growth here. Bringing in Zach Banner and running the counter or power behind him hasn’t fooled anyone and it won’t. There has to be more creativity in terms of personnel usage and in terms of spreading defenses out as well. With the current roster, I see no reason to continue with the ‘wildcat’ formation either. It was a nice change up against the worst team in the NFL earlier in the season and then became laughable.

Getting his receivers open more often has to be a priority as well. Certainly a lot of that is on them but part of being a good coordinator is scheming to get your playmakers the ball and this was an area Fichtner really struggled in this past season. The lack of screen passes and design was a detriment to the Steelers’ offense as well and Fichtner cannot ignore this things either.

Fichtner must also get his Red Zone mojo back that he had in 2018. Granted, much of this year’s dismal performance was due to the lack of Big Ben but the overall design of plays, the poor execution and the play-calling themselves were just plain bad. Fichtner was never able to build things around the positives of Mason Rudolph or Duck Hodges either and that concerns me going forward. What happens if Roethlisberger misses time again? With both Rudy and Duck likely back as the number two and three QB what can we honestly expect to change?

Much like we cannot pin everything on the players, we can’t put the poor offense all on the shoulders of Fichtner either. There were moments filled with potential that ended simply because of poor execution. I am of the mind however that this still falls on coaching. If you aren’t getting the proper execution out of your players on a consistent basis then that requires some glances in the mirror.

If Fichtner is indeed returning as the OC then there have to be changes regardless of who is playing quarterback. The defense is too good to waste and putting forth a competent offense is the best way to keep that from happening. My confidence in that is shaky at best.

Put Fetchner back as QB Coach and let’s get Nove Turner to run the offense he is from Pittsburgh and would love the job, the guy has a great head for offense coaching.

Norv is not coming in and if he did this offense would further struggle cause Ben will walk out the door and no matter who is behind center whether it be MR or a some vet QB the Offense will struggle but since the people of Steel City Blitz, Steelers Depot and BTSC don’t seemingly understand this cause lets face it most Steeler Fans now a days couldn’t gameplan any better than Fichtner and if you say otherwise go out and prove it cause I’m getting sick of it.

The common excuse of why RF is the OC is this: He’s Ben’s friend and worked with Tomlin a long time ago, that is the most BS answer I have ever heard. If that was truly the case RF would have been the OC long before 2018 but somehow nobody wants to admit it. Haley was fired cause he drove Ben nuts but yet Steeler fans would rather have that guy then somebody who makes Ben comfortable and allows Ben to run the show on Offense.

Why should Ben be asked to learn a new Offense which includes new protection calls, new play checks and new terminology when it’s clear that the Offense he has now is more than capable of succeeding.

Big Ben and Randy should ride off into the sunset the Steelers would be better off if they did.

There’s no question that if Ben starts slowly (and he wasn’t exactly on fire through the first game and half in ’18) then there will tremendous pressure on him especially if Rudolph looks good in preseason. Randy is in over his head as an NFL OC. I think he’s a good QB Coach and that’s it.

I see few question marks moving forward. Just how will Ben perform, I think we’ll have a dink and dunker who can hit the open down-field guy from time to time. Rb by committee does work but were going to need a few guys who can break a tackle or make someone miss. Running it into a wall of 8 is only going to go so far. Just don’t pretend we don’t need a veteran O-line coach and we’ll be fine [foster can still play]. James Washington is who he is an underachieving WR who can’t adjust to the ball to save his life. In short i feel we should bring in a veteran back-up QB , a proven O-line coach, get some RB ‘s who still have some tread on the tires [like a Deangelo Williams], A proven WR [Jericho Cotchery type], Let Vince Williams and Sean Davis go to pay for DuPree. It may sound like a lot but when your trying to improve from an 8 or 9 win team that’s what you got to do. We are the Steelers and we’re all about winning Super Bowls not improving from 16th to 10th place.