The Steelers and Pro Days; A Crash Course 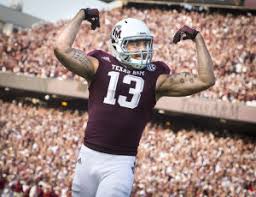 You may have noticed today that the mother of all pro days was being held down in College Station, Texas. This was the site of the pro day for Texas A&M quarterback Johnny Manziel and others.

These pro days are held all over the country during the period that exists between the NFL Combine and several weeks before the NFL Draft.

They are typically held at big time colleges and universities and players from smaller schools often attend with their big school counterparts.

These events are scripted in almost every way. From what routes receivers will run to how many times a quarterback will throw is all pre-determined. Bench presses and forty times are usually recorded as well along with any number of agility drills depending upon a guy’s position.

In terms of the Steelers and their approach to these pro days, they will attend each one with targets in mind for the upcoming draft but they will not close the door on anyone regardless of their position either.

Therefore, is it safe to assume the Steelers were in Southeast Texas today to see Aggies’ wide receiver Mike Evans? Yes it most certainly is. Does this mean they will completely ignore Johnny Manziel? No it does not and for a couple of reasons.

While Evans is certainly the ‘guy’ they were there to see, Mike Tomlin and Kevin Colbert most certainly paid a little attention to Manziel. Why you my ask? Because there is a very good possibility he could end up in Cleveland and the more you can find out about a guy who could be your opponent for the next 12 years the better.

There’s no question Tomlin and Colbert were keeping an eye on Aggies’ offensive tackle Jake Matthews as well. While the team probably feels pretty good about its’ offensive line right now, you have to be prepared if Matthews is sitting there at 15. And not just to draft him there either…

You have to be ready for potential trade offers from teams looking to move up and get a stud offensive lineman.

One final thought is that quite often, the Steelers and other teams may find diamonds in the rough and that’s important especially for a team looking to add quality depth. For example, when Tomlin and offensive line coach Mike Munchak went to the University of Michigan, common thought was they were there to look at tackle Taylor Lewan.

I’m sure they watched him closely but they were also watching fellow tackle Michael Schofield, receiver Jeremy Gallon and maybe safety Thomas Gordon.

What we all need to understand is that pro days are much more than just a star player or two. If teams like the Steelers aren’t doing their due diligence in studying other guys then shame on them.

Of course we must also remember that these pro days are nothing more than a snap shot. I’ll take game tape all day over a scripted and rehearsed event.

Steelers Interest in Blount Just a Message to MJD?

Is a ‘Tall’ Wide Receiver Really Necessary in Pittsburgh?

What I Learned on my Trip to...