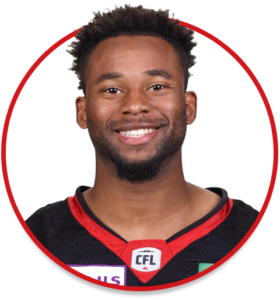 Little was known about Diontae Spencer prior to the Pittsburgh Steelers signing him on January 4, 2018. That said, many Canadian football fans will be familiar with the name, largely in part due to him being one of the best weapons on special teams in the whole league.

His footballing career, and life for that matter, has been anything but easy, and that began from the earliest of ages. From the very inception of his life, Spencer knew good things came to those who worked hard for it. This was enhanced by his role model, his dad, who installed the moniker of “can’t stop, won’t stop” within him. That phrase would soon become a ritual, and after the heartbreaking murder of his father in 2010, Spencer ensured his legacy would be felt both on the field and off of it. Often drifting under the radar because of his short appearance, he knew the only way to succeed was to put in the work, and one day it would eventually all pay off. Finally, it seems it has, after the Pittsburgh Steelers signed him to a future/reserve contract. But how exactly did he reach this point in his career?

Unfortunately, many underdog stories must begin with tragedy, with Diontae’s being no different. On September 23, 2010, a robbery at his father’s barbershop took place. Things escalated however, and Clifton Williams (his father) was shot dead at the age of 45. Clifton was a beloved member of the New Iberia community, often providing free haircuts for children before school would start. Of course, his death impacted Diontae immensely, but he credits his father for being an inspiration just as much on the field as off it. In an interview with the Ottawa Sun, he stated: “Every time I go on the field, it’s in memory of him. I try to give it my all.” Remarkably, despite such adversity, Spencer went on to have a very successful collegiate career.

A Cowboy In College

For the majority of his career, Diontae Spencer was often overlooked, as aforementioned. Weighing in at around 160lbs and 5ft 8”, it’s easy to see why. What with most large schools looking for freak athletes in the modern day NCAA. Despite his physical stature, his heart and determination were never questioned, and inevitably he found himself part of the McNeese State Cowboys. A consistent starter for the school, he shined often. His best performance came against Stephen F. Austin State University, within which he recorded 365 all-purpose yards, setting a school record in the process. In said game, he notched two kickoff return touchdowns, one punt return touchdown and two passing TD’s.

He concluded his senior year with 50 catches for 835 yards and 9 touchdowns. Yet, despite his best efforts, when the 2014 NFL Draft rolled round, his name was never called.

Diontae Spencer was a part of the Chicago Bears Spring mini-camp in 2014, but nothing came of it. Then, he was signed by the St. Louis Rams on May 27, 2014. However, he was waived come July.

With his NFL career dreams dispersing, he joined the Toronto Argonauts of the Canadian Football League in December, 2014. In two seasons, he participated on both special teams and offense, concluding his short spell there with 107 receptions for 1,208 yards and 6 touchdowns.

After testing free agency, the Ottawa Redblacks signed him to their active roster in 2017. That season, he saw a reduction in receptions with 71, however, compiled 922 yards and 6 touchdowns once more. Moreover, he produced his best game to date against the Hamilton Tiger-Cats on October 27. That game, he set the CFL single game record for all-purpose yards with a total of 496. Then, after concluding the year with 70 punt returns and 25 kickoffs, he was selected to the CFL East All-Star team as a return specialist. After signing another one-year deal with the Redblacks he contributed his first 1000-yard season receiving tally. In addition, he was once again named a CFL East All-Star on special teams.

What a return from Diontae Spencer! @DSpencer4_ provides a spark for the @REDBLACKS with the second missed FG return touchdown of Week 13! pic.twitter.com/dhF0NjWF9q

It’s little wonder why he made the All-Star list, with emphatic return touchdowns like the one above. Here you can see tremendous vision displayed, whilst also demonstrating the ability to make cuts when necessary. The overarching attribute depicted is that blistering pace of his, which will stand him in good stead in the NFL.

One thing is for sure, there is no questioning this guy’s dedication. In-fact, there’s not a coach he’s worked with that has a bad word to say about him. This is a sentiment shared by his former OC, Jaime Elizondo, who sensed greatness oozing from Spencer ever since they first met.

Met this guy @DSpencer4_ in 2015- had privilege of coaching him- all you had to do was talk with him for 5 and you knew he was on a mission- convinced him to join @REDBLACKS and continue journey in 17- Off to the next step- couldn’t be more proud! Do your thing brother!

This trait, among others, is invaluable to an organization like the Steelers, who’s fans love nothing more than someone who gives it all for the badge on the front, as well as the name on the back. With Diontae Spencer, that’s exactly what you get!

In terms of his role on the team, that has yet to be confirmed. He certainly boasts all the right skills to work the slot; he’s got good hands and possesses great sideline awareness. Moreover, he is a solid route runner and is capable of catching in traffic. On the other hand, he probably falls short of the top 4 wideouts on the depth chart. Thus, I feel Spencer will most certainly work his way onto special teams. This is majorly in part to his explosive speed and agility, but also due to the fact he is hard to take down because of how elusive he can be. Help on special teams has never been in higher demand this year, and for me inter-changing with Ryan Switzer sounds tantalizing to say the very least.

Switzer himself performed adequately on returns last year, combining for 859 yards on 60 returns. Although, I still feel Switz has more in the tank, especially judging by his collegiate career, within which he was the NCAA punt return leader in 2013 and holds the record for both receptions and receiving yards at UNC. Perhaps rotating the return specialist may do the world of good for Ryan, who will likely see his snaps increased in 2019.

As for Diontae, I wish him all the success in the world. He appears to be a fantastic athlete, with an even better work ethic, what more could Pittsburgh ask for?