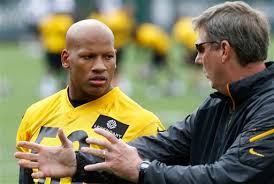 OK, so maybe a little surprise is warranted considering the Steelers’ normal behavior with defensive rookies. What we are seeing on the South Side as the Official Team Activities get underway is perhaps the dawning of a new approach.

Of course it could also be because the team really has no other choice.

For years the Steelers have been able to draft, sit and slowly bring along rookies as they learn Dick LeBeau’s defense but because of poor drafts and losses in free agency, the team has been forced to play rookies in an ever-increasing manner.

With that in mind, there shouldn’t be much surprise to know that Shazier was alongside Lawrence Timmons today. Besides the fact its a position of dire need, Shazier is a highly touted first round selection who needs to be on the field for more than  just special teams. According to several of the beat writers today, Shazier’s speed was on full display.

Let’s hope that translates to success this fall.

Other Nuggets From Today….

-Maurkice Pouncey participated in his first football activity since the opening game of the 2013 season.

-Neal Coolong of Behind the Steel Curtain made an interesting comment on Twitter today. “Le’Veon Bell has never carried the ball behind center Maurkice Pouncey.” Many forget that Bell missed the first three games last season while Pouncey went down in the opener.

-QB Ben Roethlisberger was asked about his contract situation.

“I have no clue,” Roethlisberger said Tuesday. “All I worry about is playing ball in Pittsburgh and giving it everything I have. If my agent (Ryan Tollner) says something relevant comes up — (Tollner and the Steelers) are probably talking and doing small talk — then let me know. If not, I don’t care.” (h/t Alan Robinson, Tribune-Review)

-Troy Polamalu, Ike Taylor and rookie Jordan Zumwalt were the only no-shows today. It’s not uncommon for Polamalu to miss these as he trains in California. Zumwalt is restricted from participating by one of the dumbest NFL rules on the books. Because UCLA is still in session, he cannot  participate until the semester ends.

-You might recall Markus Wheaton missing valuable time because of the same issue last offseason.

Three Buzz Words As the Steelers Start OTAs This Week