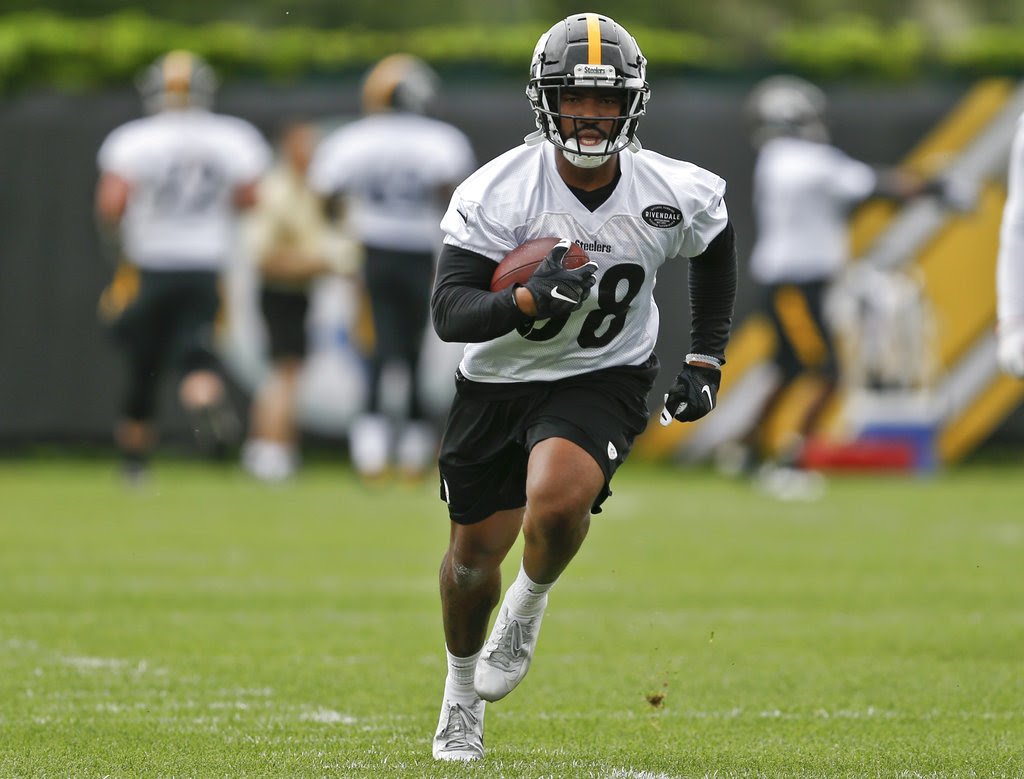 With the 165th pick in the fifth round of the 2018 NFL Draft, the Pittsburgh Steelers selected Jaylen Samuels. The versatile prospect out of North Carolina State entered the NFL listed as a tight end, yet he excelled this season in the absence of James Conner.

We should have anticipated his talents at the position because of his career at the aforementioned school. There he participated in snaps as a fullback, running back, tight end and wideout. At collegiate level, Samuels was widely touted as one of the more versatile prospects in the draft. And rightly so. At NC State, he concluded his four-year career with 201 receptions for 1851 yards and 19 receiving touchdowns. Moreover, he averaged 9.2 yards per catch across those seasons. In terms of the run game, Samuels accumulated 182 carries for 1107 yards and 28 rushing touchdowns.

Furthermore, Jaylen Samuels also achieved several accolades at the school. Firstly, he became MVP of the Independence Bowl for contributing 3 touchdowns in the game. This, coincidently, set the record for the most touchdown receptions in its history. He also set the record for career receptions for NC State in his senior year with 202. Following on from his last year at the school, Samuels was invited to the Senior Bowl and was honoured as First Team All Conference as an all-purpose player.

With the uncertainty surrounding the situation of Le’Veon Bell it was vital the Steelers selected a viable backup to help James Conner carry the load. That was largely unneeded at the inception of the season, as James Conner was not only replicating, but outperforming Bell of yesteryear.

That said,  Samuels garnered his first snap against the Cleveland Browns in week 8. That game he rushed for 17 yards on 4 carries, averaging 4.25 yards per attempt.  From there, Mike Tomlin’s trust in the young back manifested as he began to enhance the number of snaps Samuels participated in.

By week 14, Conner was sidelined, which produced a starting spot for Jaylen. Against the Oakland Raiders, he was awarded little snaps in the run game, however, he did compile 28 yards on 11 carries. On the other hand, he was excellent in the passing game, as he caught 100% of the balls thrown his way with 7 receptions for 64 yards.

Week 15 proved to be his best performance of the year however. With the New England Patriots seeking to end our playoff hopes, Samuels stepped up to the plate when he was needed most. He rushed for 142 yards on 19 attempts, averaging 7.47 yards per rush. He also caught 2 passes for 30 yards as well. His performance was absolutely integral to the 17-10 victory, which kept our season alive for at least another week.

Then, after narrowly missing out on the 2018 postseason, Samuels concluded the year with 256 rushing yards on 56 carries. He also notched 26 receptions for 199 yards, which averages 7.7 yards per target.

What Impressed Me The Most

Despite having only seen very few glimpses of Samuels’ game, I’ve been impressed multiple times. The majority of which stems from his incredible performance against the Patriots.

The first thing that instantaneously wowed me is his patience in the backfield. Much like Le’Veon, he is exceptional at waiting for the block to be set before pursuing the route he wishes to take. Below you can clearly see him wait a hole to be created. Once the gap is created, Samuels gains the first down with ease.

Another aspect of Jaylen’s game I adore is the fact that he can perform in multiple aspects. First of all, he’s successful in playing the “straight and narrow” role. But he also excels when bouncing the run outside, despite not possessing explosive speed.

Most importantly, his experience at tight end makes him a fantastic outlet for Ben Roethlisberger. What’s most impressive is that he can also catch balls in traffic, which is unique among the “traditional” backs in the league.

Ultimately, it’s been a fantastic year for the young back, whose only going to improve next year. Coach Tomlin clearly respects his game, thus I expect him to feature even more next season.

Should Bud Dupree Have His Fifth-Year Option Rescinded?