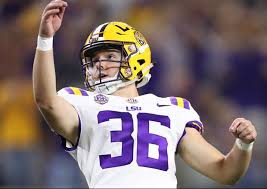 As you probably know by now, I love special teams. From gunners to kickers and everything in between. The influx of kicker/punter personalities have literally taken over social media, with guys like Pat McAfee pushing a narrative that even Mike Vanderjagt would be proud of.

Above anything else however, the Steelers need competition in the kicking department this season, what with Chris Boswell’s meltdown last year giving almost everyone who reps black and gold an edgy feeling every time he took the field. With that in mind, I took a gander down prospect lane to discover some of the upcoming seasons’ kicking talent.

Matt Gay’s path to the draft is a little different from most. Firstly, he began his collegiate career in sports at Utah Valley playing soccer and it wouldn’t be until 2017 before he took to a football field.

Regardless, once he arrived on said field he excelled tenfold. In his rookie year, 2017, Gay led the country in field goals made with 30. Moreover, he also led the country in 50+yard field goals (5, tied), and field goals attempted (34). His .882 FG% rested fifth in the nation, and was a significant factor in Gay garnering the Lou Groza Award. (The aforementioned award is given annually to the best placekicker in college football, named after legendary Buckeye and Cleveland Brown, Lou Groza.) In addition, he was named as a Consensus All-American and First Team All-Pac-12.

His Senior campaign followed on from the 2017 season immaculately. He once again led the Pac-12 in field goals, this time with 26. Also, he finished the season with a .839 FG% which ranked second in the division. Perhaps most impressively, he registered a new school record for most consecutive field goals, after going on an unrivalled streak of 21 in a row. He was once again reinstated as a member of the First Team All-Pac-12, but only earned Second Team All-American honors.

Matt has also never missed a PAT, having converted 85 of 85 in his collegiate career, whilst his longest field goal was from 56 yards, which he has converted twice.

For me, and many others, Gay is among the top kicking prospects entering the 2019 NFL Draft and it is likely that he will be one of the first selected off the board at his position, if not the first.

Cole Tracy’s career is the making of legends. He began playing collegiate football at Assumption College at D2 level, where he was immense. Of course, things weren’t always easy for the NCAA’s all-time leader in FG’s, being that he missed his first ever kick, which is now football folklore. Irrespective of that tale, he played three years at the school from 2015-2017. In that space of time, he became the all-time leader for points in school history with 373. Moreover, he also contributed the most points in a single season in school history (148 in 2017), as well as holding the record for the most field goals converted in school history (68).

Then, this season in 2018, he transferred to Louisiana State University. There, he became the all-time leader in field goals converted within a season with 28. Besides that record, he also converted 100% of his 42 PAT attempts, whilst he only missed 4 FG’s in its totality. On top of that, the final kick of his career against Central Florida in this seasons Fiesta Bowl surpassed Zane Gonzales of Arizona State for the most field goals converted in NCAA history. He also holds the NCAA all-time scoring record (all divisions) for points by a kicker with 502.

2014 was Baron’s first year of college, however, he utilised the redshirt due to a lack of playing time. He began the season fourth in the rotation. Despite the odds, he eventually concluded the season second in the depth chart. Then, in his freshman campaign, he travelled with the team to every game but never took the field.

In 2016, Baron II got his first opportunity as a starter. That season, he converted 56 of 58 PAT’s, which serves as a .996 conversion rate. He also converted 91.3% of his field goals that year, converting 21 of 23.  That percentage ranked 10th nationally. As a result, he was named as a Lou Groza Award semifinalist.

In the ensuing two seasons, Baron vastly improved his PAT conversion rate, as he made good on all 79 of his PAT’s. That said, he missed multiple field goals in each campaign, converting 12/15 and 17/22, respectively.

Regardless, the 2018 campaign saw him make the Semifinals of the Lou Groza Award once again, whilst he made the All-Mountain West Second Team. Furthermore, the left-footed kicker ranks first in school history for 50+yard FG’s (6), whilst he is second in field goal percentage (.833) and field goals converted (50).

For me, Baron’s best skill is his range. Not only does he possess solid accuracy, he has the leg to convert long FG’s, having converted 6 of 6 FG’s from the 50+yard marker.

I am undecided as to whether Baron II will be taken in the Draft. This is due largely because of the blemishes on his record, particularly the regression in his field goal conversion rate following on from his freshman year. Either way I believe he will most certainly be brought in as camp competition, should he not be taken in the latter rounds of the Draft.