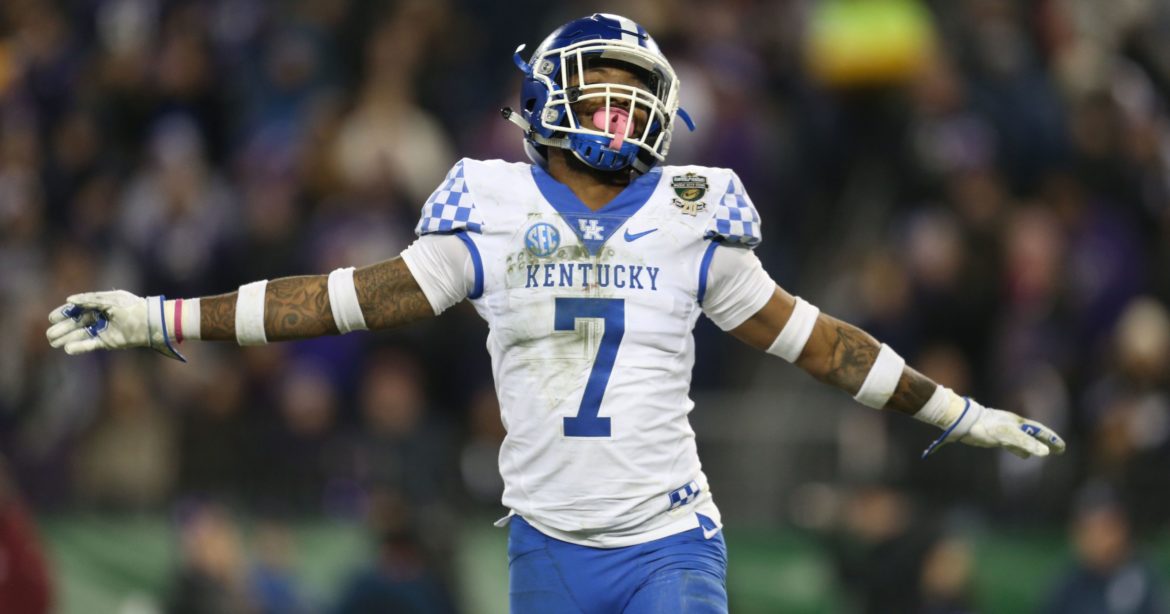 The Terrell Edmunds selection in last year’s NFL Draft surprised the bulk majority of us. He didn’t quite ‘wow’ us last season, but with that being said, I remain optimistic that Edmunds can transcend his game and reach those heights that he was projected to be able to achieve. In addition, the Sean Davis experiment has yet to transform into something great, thus the Steelers may be on the lookout for an interchangeable safety to help carry the snaps. Well, look no further than Kentucky’s Mike Edwards.

– Edwards has scheduled private workouts with  the Pittsburgh Steelers, as well as visits with the Patriots, Dolphins, Titans, Raiders and Giants, per Justin M of SB Nation’s Music City Miracles. (@JustinM_NFL).

– Never missed a game in his four-year career, having started 44 games out of 51.

– Ranks second in school history for tackles among defensive backs, behind Darryl Bishop (348 from 1971-73).

– 10 interceptions in his collegiate career, which ranks fourth overall in school history.

Edwards reads plays relatively well, particularly running plays. Gets his head up and attacks downfield wholeheartedly, whilst taking solid angles when approaching the ball carrier. He has produced success in the air, having garnered 2 INT’s this year. Furthermore, he had demonstrated the ability to compete in the air on numerous occasions. He possesses profound versatility, having featured as both a free and strong safety, as well as garnering multiple snaps as a nickel cornerback. In the latter position, he was very solid. Not only did he possess patience and the ability to contend with the slot receiver, he very rarely got beaten on routes. He has also been utilized as an extra blitzer off the edge too to varying success.

Edwards is fearless when it comes to reaching the target and will take on blocks and do his best despite his smaller frame. His tackling technique is fairly solid, as goes for the legs and wraps up his man effectively, despite the odd missed tackle here and there. He possesses solid lateral quickness, whilst boasting good speed and acceleration. He is a non-stop motor kind of guy; producing hustle play, after hustle play.

By far my favorite play of Edwards’ collegiate career is this one versus Georgia. It depicts his relentless hustle and willingness to make a play.

Slight reduction in his statistical production in the tackling department, having produced 100 tackles in his sophomore year, 92 in his junior campaign and now only 82 this season. Can get eaten up when operated as a blitzer, largely due to his limited frame. Edwards needs to refine his aggression. On a couple plays for example, he sprints downfield uncontrollably and gets juked rather easily. Small concern regarding his attention to detail when it comes to his assignment, given that on a couple of occasions he got caught trying to do too much by guessing the play-call. As aforementioned, he conducted a couple missed tackles, which came against bigger receivers like A.J. Brown and Jace Sternberger most notably.

My biggest question mark surrounding Edwards’ game is his longevity. Despite his career being in the very early stages, he had made 44 consecutive starts thus far, having been one of Kentucky’s most utilized prospects. As a result, I worry how much damage his body has taken to this point.

I can’t lie, I love Edwards’ game. Sure, he is far from the polished, final product. He enters the league with concerns surrounding his size, which limits him from being a trademark type safety.

That said, his statistical production doesn’t lie. He has been a consistent contributor in the tackling department, whilst also producing game-altering plays in the process; take his 4 total turnovers in the 2018 campaign for example. Moreover, he is an incredibly versatile talent who can play a variety of roles on the defensive side of the ball. It’s this versatility that I believe the Steelers could use, as he could be utilized as a backup safety, either strong or free, and as a nickel back, a position he is very comfortable playing.

Taking into account his limitations and the weight his Pro Day performance beholds on his draft projection, I believe that Edwards boasts the talent of a third round selection at this moment in time. That, I feel will be reflected in the 2019 NFL Draft, as I believe he will be taken off the board by the early stages of the fourth round.

SCB Steelers Quick Hitters: The “Off the Rails” Edition