SCB Steelers Quick Hitters: The “Off the Rails” Edition

I really hate to start here but it’s difficult to do otherwise. I say this because former Steeler Antonio Brown is off the rails. I really am to the point where I’m seriously concerned about his well-being. His immaturity – on display again after passive-aggressively tweeting about JuJu Smith-Schuster – is going to be his demise. It’s as if he just cannot stand being out of the spotlight for more than a day or so. What’s he going to do when he’s no longer the highest-paid wide receiver? That time is coming and better be prepared for it. I never dreamed I’d be so happy to see a player off the team I love and devote so much of my time to but he’s achieved this feat. I’m sure he’ll make some big plays for the Raiders but overall I don’t see it ending well. He will realize quickly just how good he had it in Pittsburgh and his downfall will not be a pretty one.

The NFL Owners have decided to add Offensive and Defensive Pass Interference to the list of things that are reviewable despite my wishes to the contrary. These become the first-ever penalties that may be challenged by coaches. Officials will still determine challenges in the final two minutes of each half. Once again the NFL is proving itself to be reactive rather than proactive. The only reason this is happening is because of the horrendous non-call in the NFC Title Game. Never mind the numerous other missed calls throughout the season. I stand by the same opinion I’ve had for years. Only scoring plays should be challenged.

The fact that AB had to essentially sub-tweet JuJu just adds more fuel to the fire that he was jealous over JuJu being Team MVP. #Steelers

Suddenly people are questioning why it took current and former players so long to come to the defense of Ben Roethlisberger. Let me be blunt here. When lunatics are ranting you do not join the fray. You sit back, let them spew their narratives and stay out of it. Jumping in with people who already have opinions that are either biased or uninformed will do no good. Once the lunatic fringe quiets, then you come forward to make your case. This is what sound, logical-thinking people do. To look into any more than that is a waste of time. And besides, there were still people that made positive comments about Seven anyway early on. They just got buried because they didn’t correspond with what the media was trying to push.

Mark this down if you want to but I’m really of the opinion that both Devin White and Devin Bush will be gone before the Steelers can even think about trading up to get one of them. The big “what if?” If QBs like Drew Lock and Daniel Jones suddenly become hot commodities then there’s a chance. As Jim Carrey once said, “So you’re saying there’s a chance?”

Keep an eye on the name Blake Cashman. He’s a linebacker from Minnesota and I’m fully expecting to hear he’s been in contact with the Steelers. I’ll say the same for Utah State Tight End Dax Raymond too. 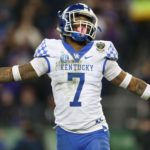