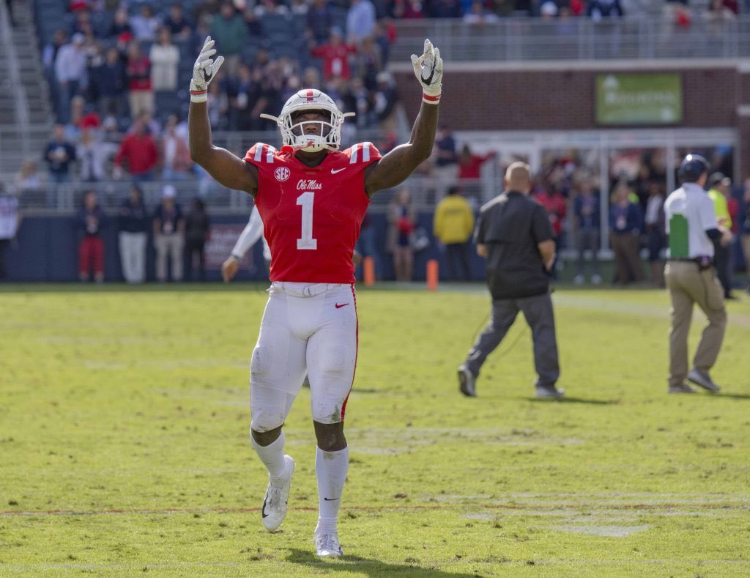 With the departure of star wideout Antonio Brown close on the Pittsburgh Steelers’ horizons, it’d be a smart decision for Kevin Colbert to select a wide reciever to help replace AB. We at Steel City Blitz have profiled numerous receivers thus far, and we continue that search with Ole Miss’ A.J. Brown.

General Studies major with an emphasis in Education, Journalism and Legal Studies… Selected in the 19th round of the 2016 Major League Baseball Draft by the San Diego Padres and has participated in the team’s extended spring training each of the past three summers…holds record for most receiving yards (1320) & receiving touchdowns (11) in a single season in school history. Ole Miss leader in receiving yards all-time (2984).

Uses stride length in his routes brilliantly which manipulates the corner and produces big gains. He runs comeback routes almost to perfection in my opinion. Hip adjustment and bend is fantastic, which allows him to search for the ball. Has a solid stature, which he uses to out-muscle/out-jump his marker. Possesses safe hands and good boundary awareness. Adjusts well to the ball’s trajectory when given the opportunity, whilst navigating his feet in-bounds. Solid red-zone threat also. Is effective in a multitude of formations and has played both as the slot and as the X receiver. Can be utilized on trick plays, specifically WR screens where he found much success at collegiate level. Brown boasts exquisite shiftiness for his size and constantly accumulates yardage after the catch. Agility is arguably his best asset, making him a difficult man to bring down in the open field. Blocking technique is pretty good when he wants it to be.

Lacks explosiveness at the line of scrimmage, which results in very little leverage to begin the play. Poor acceleration means it takes a short while to start his motor. Lacks effort when blocking (seems uninterested at times). Slightly slower than his counterparts. Suffered from poor QB play, which reflects negatively on his film. Suffers token easy catch drops every now and then.

A.J. Brown was heralded as one of the premiere receivers in the draft pool prior to the conclusion of the 2019 campaign. Despite those high plaudits, I personally cannot foresee Brown being selected on day 1 of the 2019 NFL Draft. Upon watching his tape, he suffers from a lack of speed and finds difficulty creating separation against more athletic corners. That said, Brown boasts a fantastic skill-set as his size coupled with agility and shiftiness makes him a solid addition to any NFL franchise. As a result of my analysis, I feel that in this talented class of receivers he will be taken in the third round of the draft, which both reflects his grade as an athlete and where I project him to be selected.

[…] cornerback, there are many wide receivers left on the board. These include DK Metcalf, AJ Brown, Hakeem Butler, Deebo Samuel, Miles Boykin, and Kelvin Harmon. With JuJu Smith-Schuster taking over […]