Should Bud Dupree Have His Fifth-Year Option Rescinded? 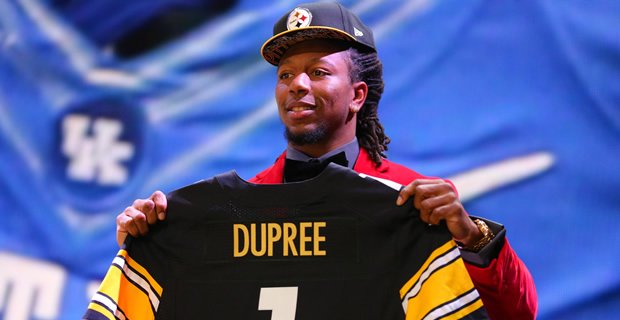 Bud Dupree’s four-year $4.25 million rookie contract has come to an end, but where do we go from here?

Well, first let’s analyze exactly how we got here, starting with his collegiate career at Kentucky. After four years, he ended his career at the school with 247 total tackles, 39.5 TFL, 25.5 sacks, 1 interception and 5 forced fumbles.

Entering the 2015 NFL Draft he was touted as a first-round talent for sure. The general consensus among football critics was that whichever franchise garnered Dupree’s talents would receive a freak athlete. His speed, athleticism and raw strength made him a dominant force at the line of scrimmage. More importantly, he also demonstrated an ability to perform in pass coverage, which is largely unheard of for an athlete the frame of Dupree’s. The only discrepancy with Bud was the fact that he was inconsistent at times. Looking back now, they pretty much hit the nail on the head.

I was delighted when the Pittsburgh Steelers selected Alvin “Bud” Dupree with the 22nd pick in the 2015 NFL Draft. He possessed everything we needed as a replacement for Jason Worilds, who had unexpectedly retired after a 7.5-sack season in 2014. Above all else, I truly felt that the Steelers could help nurture and mold Dupree’s talent in order for him to produce constant results for the team.

After a relatively solid rookie year as a backup, he finished the season with 1 pass deflection, 4 sacks, 26 combined tackles and 4 TFL. In the next two seasons, Dupree suffered from injuries in 2016 meaning he featured in just 22 games, 19 of which he started. Through those, he accumulated 2 pass deflections, 1 forced fumble, 10.5 sacks, 64 tackles and 18 TFL.

By 2018, he had one final shot at demonstrating his true talents in order to earn another contract. After starting in 15 of 16 games, he achieved career-highs in tackles (42) and pass deflections (3). He also added 1 forced fumble, 5.5 sacks and 8 TFL. Furthermore, for the first time in his career, Dupree returned an interception for a touchdown in a week 3 victory over the Tampa Bay Buccaneers.

Speaking of firsts…@Bud_Dupree with the first touchdown of his career?? pic.twitter.com/QGp9uLZ0TX

In a nutshell, I believe that Bud’s career has been largely inconsistent, with times where he has shone brighter than the sun, and others where he has been a non-factor in the game. The negatives factor in when it comes to effort. I certainly am in no position to question a player’s effort but it appears at times like he gives up on the play when he can’t beat his opponent in the trenches.

The positives remain in pass coverage as he’s fairly strong in zone coverage, having demonstrated that this season more than any other. Additionally, he’s been improving statistically, as well as performing well in the pass rush as he is second in QB pressures on the Steelers’ roster with 33.

In my opinion, Bud Dupree deserves another contract on the team. However, I feel the magnitude of his contract is far too great, especially for the results we have witnessed thus far. On the contrary to that belief, he is actually performing at the level expected by the coaching staff.

That statement was reinforced by Ian,  (@thesteelersnat) another Steel City Blitz writer. He had previously researched the cost of one “expected sack” among the top outside linebackers in the NFL.

Let’s start with the Minnesota Vikings’ stud, Danielle Hunter. At the inception of this season, Hunter signed a five-year $72M contract extension. The average annual value of Hunter’s contract is $14.4M per year. Before signing the contract, Hunter had 25.5 career sacks, an average of 8.5 sacks per year. If you then take the money divided by average sacks (or “expected sacks” if the team expects him to maintain approximately that same rate), the results conclude with 1 sack being worth about $1.7M ($14.4M per year / 8.5 sacks per year).

He then came to the conclusion that this $1.7M figure produced a correlation with Von Miller’s contract also. In 2016 Von Miller signed a six-year, $114.5M contract. The average of that is about $19.1M per year. In the 3 years before signing the deal, Von had 11, 14, and 5 sacks (but in that final year he was suspended for 6 games). If you factor out that suspension, he would have averaged about 11.5 sacks per 16-game season. Thus, when you divide the annual yearly salary ($19.1M) by the number of average sacks produced (11.5), the “expected sack” value once more is approximately $1.7M.

This $1.7M per “expected sack” also works for Jason Pierre-Paul’s 2017 contract. Khalil Mack’s monster deal with the Bears averaged $23.5M over 6 years after Mack had averaged about 12 sacks per year over the last 3 years. This averages out to about $1.9M per “expected sack” and Mack equalled his career average with 12.5 sacks this season.

So, what’s this got to do with Bud’s deal? Well, thus far Dupree has compiled 20 sacks in four years. His $9.2M  fifth-year contract option divided by the $1.7M per “expected sack” figure would total 5.5 sacks per year. Thus, we gathered that Dupree is contributing almost exactly as much as he should as he averages 5 sacks each season as of now.

To conclude, I genuinely believe that Dupree deserves another deal. I would recommend that the Steelers rescind the $9.2M option, and pursue a deal at a lesser value, perhaps around the $6.5M mark. I feel that he has improved statistically, as well as performing well in pass coverage. If we could finally achieve consistency in his ability he could truly become a revolutionary at the line. Moreover, I can’t visualize the Steelers unearthing a gem in the upcoming draft should we decide to allow Dupree to hit the market, as many sources have detailed the fact that the Steelers will pursue the hunt for an inside linebacker with our first-round pick.

There also remains a strong likelihood that he is re-signed, evidenced in a recent interview with President Art Rooney II. He stated: “I think there was some progress there this year. We’re looking for progress from him again (in 19).”

With thanks to Ian for his magnificent work on the financial side of things!

SCB Steelers Quick Hitters: The “Hear Me Out” Edition 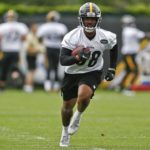