Home Coaches Mike Tomlin is Not Getting Fired
CoachesDefenseKickerOffense

Mike Tomlin is Not Getting Fired 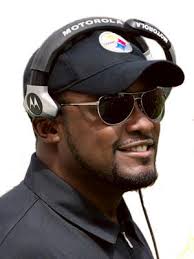 Look, I’m just as disappointed as many of you are about the 2012 Pittsburgh Steelers. It was a season that offered some promise and at the very least another trip to the playoffs if nothing else. Those dreams crashed and burned with offensive ineptitude and a defense that couldn’t create enough big plays.

There will be and is lots of blame to go around and I know this will upset some of you but Mike Tomlin is not getting fired. Did he have a poor season? Well, that’s like asking if the Rooney Family is Irish. Like players, coaches can have bad seasons too and Tomlin certainly falls in to that category.

Those of you calling for him to be sent packing must be forgetting that you root for the Pittsburgh Steelers. This is a franchise that has had three, count’em THREE head coaches since 1969!! The Rooney Family does not take kindly to knee jerk reactions and they won’t in this case either.

Do you realize how ridiculous we sound to other teams’ fans when we call for a guy who has been to two Super Bowls and is just 40 years old to be fired? Imagine being a Chargers’ fan or a Lions fan or for the love of God a Browns’ fan!! Look at some the crap they’ve had to endure over the years and maybe you’ll see things differently.

Does Tomlin have things to prove? Absolutely he does. He has to address the special teams’ issues and he must bring in a new offensive line coach. He’ll have some soul-searching to do when it comes to his coordinators but I see no changes there, sorry to disappoint many of you.

Perhaps the biggest thing Tomlin has to do is review his game-management failures. He has to realize that his personnel has changed since he took the team over and yet he still coaches as if these are the same players they once were. A head coach must adapt to his team and I think this is where Tomlin has failed.

He often fails to recognize the ability of Shaun Suisham who has had a fantastic season, yet the entire fan base knows he can’t be relied on for anything over 50 yards yet Tomlin still trots him out there. He must realize that this team is not built to hammer the ball straight-ahead on a long fourth and one. If you’re going to go for it at mid-field then you have to be more creative than what has been shown in recent years.

This will be a big off-season for Mike Tomlin. He will have to work with Kevin Colbert and salary cap guru Omar Khan to decide who goes and who stays. In their place, he must find players who can make an impact and that will be around for a few years. Many of the Cowher-Era guys are on their way out if they haven’t left already so the pressure is on Tomlin to draft better than he has in the past and find free agents who can contribute at a fair wage.

No, Mike Tomlin is not going anywhere but I do believe he will be in serious trouble if this team does not make the playoffs next year. The Rooney’s are patient but they understand this isn’t the 70’s or 80’s anymore and the fans’ voice is stronger than ever. Steelers’ Nation has high expectations and no one knows that more than Tomlin.

Potential coaching changes already a hot topic for the Steelers, but not for Lebeau

The Real Work Begins Now for the...

If he could just learn from his mistakes people would be a lot less hard on him. He constantly wants to have his team bail him out of bad decisions but more often than not this year they couldn’t. How many times do you beat yourself over the head before you stop?

Tomlin is not the problem. Injuries aside, as many teams have injuries and persevere, having an offensive coordinator & a QB who arent on the same page is a major concern.

I just do not think Haley’s system is very good, and instead of trying to fit our pieces into his puzzle, he needed to think more of what he can adapt for our team.

Personally I think Todd Haley needs to go. And we need to start looking for a QB who’s not starting to get past his prime and injury prone.

Tomlin is the problem. 2 out of 4 years no playoffs. Not ready to play. He is riding the coattails of Bill Cowher. Tomlin is a smooth talker and thats all. He is the problem. Funny, but it wasnt his players that he took to the superbowl 2 of the 4 years so get over it. I dont want to hear that he took them to the superbowl. Look Tomlin is a guy that can sell ice to an eskimo but the proof is in the pudding. 2 out of 4 years no playoffs. Look what happened in Dallas after Jimmy left. Switzer won a superbowl and they havent been back to playoffs since(well once). Learn from Dallas. Look I was a huge Noll fan and Cowher fan. I was duped by Tomlin just as most of Steeler nation. However, not anymore. This is not a knee jerk reaction by letting Tomlin go. I do not like the way the steelers have been going the last 3 years. It is time for a change. I know the steelers are a model of consistency but Tomlin is not the guy. FInd a another guy with a cool fade and sunglasses.

I agree with Thomas. He duped the Rooneys as well as myself. I am tired of watching this team not being ready to play. Tomlin has had a few years to see what he can do. I dont want to wait till next year. Lets make the changes now

I’m like a lot of you on Tomlin as I realize that i was duped by his cool attitude and his introduction to the pittsburgh steelers press conference when he said things we all wanted to hear(im a blue collar type of guy and i love to play the fundamentals.I believe in running the football blablabla) yet he didnt do a single thing he said he believed in.That being said I still think we should give him one more year to evaluate but definitely need to fire him next year if this team isnt in the playoffs.Id even dare say we would need to fire him if this team doesnt go to the 2nd round of the playoffs next year.You look at teams like the Ravens they constantly make the playoffs even though they dont win Super Bowls they will win one if they keep knocking on the door.

As a coach, it should be the system you want to teach and use because it masks
other deficiencies and keeps your players motivated.
We all saw how aggressive tactics worked wonders for Germany in the World Cup.
The area used to be larger but was subdivided, the north eastern half being renamed Fisher.

If you have experienced online identity theft or any other sort
of internet fraud, contact the Federal Trade Commission’s Internet
Crime Complaint Center at. She and her husband,
Ernie Cicogna, the company’s Executive Vice
President and Co-Founder, have been together as a couple for nearly 15 years and
Glam Media is the second company they have worked at together.

The majority of surveys are geared toward the 20 something to 30 something urbanites, who are most likely to be in on the latest technological products, have young children at home, and are more likely to take advantage of the “free offers” included in
each survey.