These are some of the names to handle punting duties for the Pittsburgh Steelers over the past decade or so. With the exception of drafting Sepulveda in the 4th round of the 2007 NFL draft, which ended up being a huge failure, the Steelers have preferred to scour the free agent market for journeyman punters to fill the spot on the roster.

You can’t necessarily argue with results, as the team has had great success with some of the names above. That being said, it’s definitely always been a position where the Steelers rank near the bottom of the league, and a good punter could give this team an advantage it’s not used to having.

Jordan Berry appeared to be the latest in a long line of “who?” type punter signings last off-season. However, Berry was impressive enough in camp to let the Steelers trade Brad Wing.

Last season Berry had some moments of brilliance, but suffered from inconsistency. Berry finished the season ranking 32nd in the league in punt average; booting at 42.6 yards per punt. He ranked 25th in net average, at 39.1 yards per punt.

I know that the sample size is still small, but so far in this preseason, Berry has been crushing his punts for distance and hang time. He currently ranks 2nd in punting distance average at 56.2 yards per punt, and first in net average with 54 yards per punt. Of his 5 punts, 4 have been returned for a total of 11 yards.

Not only has Berry been booting for distance, he’s been putting his teammates in a good position to cover the punts for minimal returns.

We have a long season to go, and maybe Berry shanks a couple against the Saints next week and makes me look stupid, but last season I thought all along that Berry was a guy that had potential, and just needed some time to work on his craft and get comfortable punting at the NFL level.

If Berry does become more consistent, the Steelers could have an added advantage this season that none of us really expected. While the defense is improving, they’re still young and likely to struggle in the secondary. This defense is going to give up chunks of yardage, and are going to have to get their stops on splash plays like sacks and turnovers. Forcing opposing offenses into a longer field gives them more time, and space, to make those splash plays.

If Berry continues his hot streak into this season, the team has him under contract through this year, and the 2017 season for very cheap, but I’d expect a length extension down the road if this preseason is a sign of things to come. 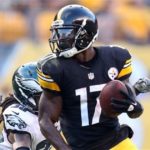