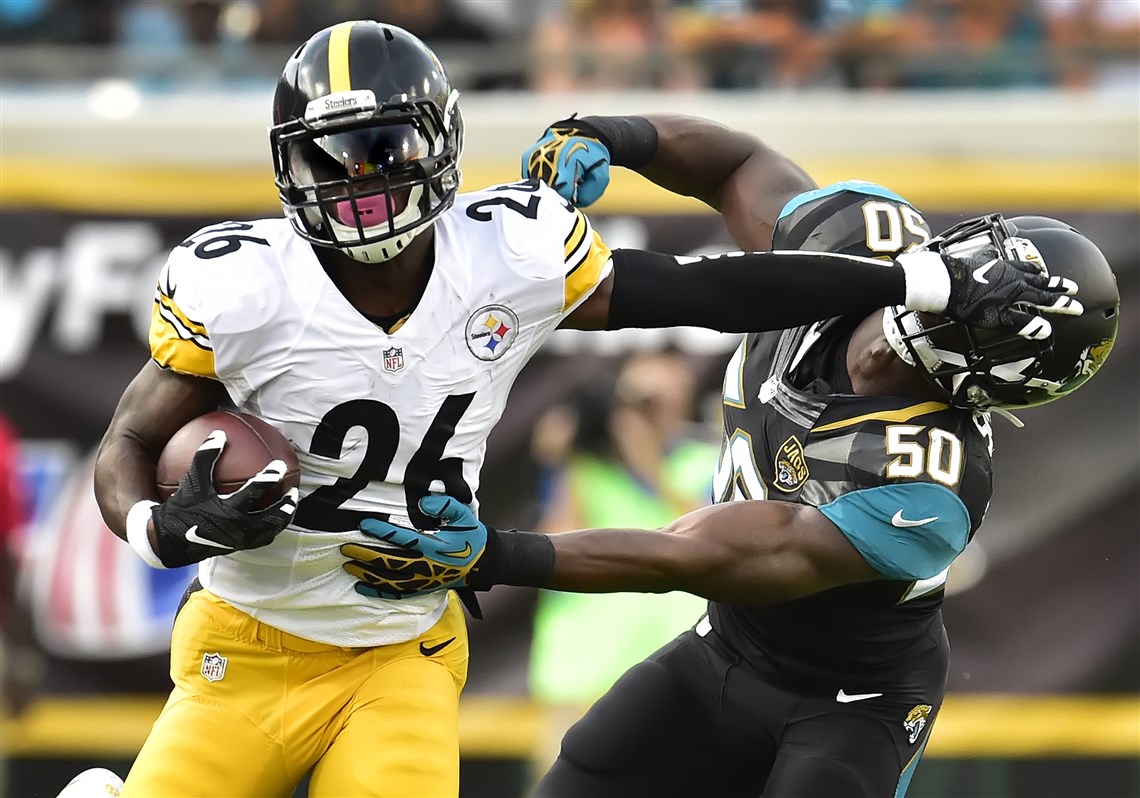 Will he or won’t he? That seems to be the question on every Steelers fan’s mind with less than a week left before the deadline for Le’Veon Bell to sign a long-term deal. Jerome Bettis recently went on record urging both Bell and the Steelers to work something out. Bettis believes that neither the team, nor Bell will fare as well without the other. Which frankly, is probably true for both.

While fans would love for a player’s priorities to be 1) being the best player he can be, 2) being part of a winning organization and 3) making enough to live very comfortably  the rest of his life; that isn’t necessarily the way it works.
For some guys it’s 1) be the best player he can be, so that 2) he can say that he’s paid the most. Being part of a winning team is way behind those two.  The latter seems to be the place that Bell has negotiated from the past two off-seasons. In fact, Bell wants to dictate a new market for running backs. He wants his contract to be historically huge. He’s gone on record that he should be paid like the best running back and the #2 wide receiver, which is more than the Steelers are ever going to give one player.

Rumor had it a few weeks ago that Bell had lowered his asking price from $17 million per year to $14.5 million per year. He even put out a few cryptic messages on social media: “Optimistic” and  “A lot closer than last year.” Why doesn’t this matter?  Because we heard similar things last year and more importantly because we still don’t know if Bell will accept the Steelers’ contract protocol (which I broke down at length last year here). If he won’t accept that, he isn’t going to be a Steeler in 2019.

Does NBA Contract Season complicate the situation? Maybe. It seems to be a hot issue with almost all NFL players now. I don’t see any equivalence between the two pro sports leagues, but NFL players are clearly jealous of the fact that NBA players have fully guaranteed contracts. What I am almost certain is throwing a wrench in the works is that Bell’s college teammate just got a fully guaranteed mega contract. Kirk Cousins’ new deal with the Vikings is fully guaranteed for three years at a total of $84 million.
Will some team be desperate enough to give Bell a fully guaranteed deal for three years at say, $51 million in 2019? ($17 million per year). If so, it would be that historic, market resetting deal that Bell has said he’s holding out for. At the end of that hypothetical deal, he would have made $77 million dollars over the previous five years, he’d be 29 years old and could potentially cash in again if he was still healthy and performing well.

On the subject of guaranteed money, which was an important issue for Bell in 2017, as I explained last year at this time the Steelers never guarantee anything but the signing bonus in their contracts. It gives them more structural flexibility as a small market team and frees up cash that otherwise has to be deposited in escrow upon signing even if it’s going to be paid out in later years. The Steelers do however, keep their word when they tell agents that their player will very likely be restructured in year two of his big deal. It creates cap space for the team, but also gives the player another payday along with a couple of extra years that as a practical matter are guaranteed because the cap hits the team would face to release that player  are too cumbersome to swallow.

Take for example, the case of Stephon Tuitt. The Steelers recognized what they believed to be immense potential in Tuitt after the 2016 season and made him the highest paid defensive lineman on the team. Tuitt had a decent, if uninspiring year in 2016 with 28 tackles total, 4 sacks, 5 tackles for loss and 2 forced fumbles. But, he was playing without his counterpart Cam Heyward and the Steelers saw enough potential in Stephon that they wanted to make sure he was around long term.
Fast forward to the end of the 2017 season. Tuitt is playing opposite a Cam Heyward who is having a monster season, making #97 a priority to be blocked on every down by opposing offensive lines and Tuitt has a very pedestrian season. Granted he was at less than 100% for practically the entire season and missed 4 games entirely. But, he did have the benefit of a strong Heyward playing opposite him creating havoc. 2017 was another decent yet uninspiring year for Tuitt with 19 tackles total, 3 sacks, 6 tackles for loss and 1 forced fumble.

One might think that the Steelers would be cautious about the future with Tuitt and not restructure his deal because it would tie Tuitt to the team for at least two additional years. They were not. They made a commitment when they signed the contract and they saw that commitment through.

That is why I find it difficult to understand why players look at the Steelers only guaranteeing the signing bonus as a bad thing. Players that sign big contracts with the Steelers usually make at least 80% of the total money allotted to the entirety of the contract. The Steelers include large roster bonuses due 4 days after free agency begins in years two and three that tie the player to the team for that year, giving the player more security. The team isn’t going to pay a guy $5 million in March and then cut him in August to avoid paying his $6 million salary.

With a lot of teams, as soon as the guaranteed money is paid out, the player’s contract is ripe for release because of the cap savings that can give his team. There is a huge difference between the way the Steelers treated Lawrence Timmons when he had a $15 million dollar cap hit and the way the Dallas Cowboys treated Dez Bryant when his guaranteed money was paid out. Timmons got all of his money. Bryant was shown the door, and in Bryant’s case it was well after the free agency money had dried up.

I give Pro Football Focus a lot of grief for their “grades” because their grading system doesn’t include variables like knowing player assignments and because they often issue grades without the benefit of coaches tape, or All-22, which is publicly available each Tuesday. However, they do a pretty fine job of aggregating situational stats and in pointing out trends that develop in team/player situational behavior. That, in my opinion is where the value is with their site. They posted a tweet on Thursday that caught my eye because I’ve said for years that the majority of Bell’s pass targets are in effect “long handoffs.”

#Steelers RB Le'Veon Bell saw a lot of volume in the passing game last season and a large portion of that came in the backfield. His 56 targets at or behind the line of scrimmage led the NFL in 2017. #SteelerSpotlight

Bell had a total of 106 pass targets in 2017. A huge volume, no doubt. But, when you subtract over half that were at or behind the line of scrimmage and then isolate the 5 yard dump offs when he was Ben’s outlet receiver, it becomes clear that while Bell is a capable receiver, he is not the number 2 receiver on this team.
Martavis Bryant had 84 targets last year. JuJu Smith-Schuster had 79. The majority of those targets were thrown well past 5 yards north of the line off scrimmage. Even Jesse James had 63 pass targets.

Before you decide otherwise, I’m not saying that Bell isn’t the best player in his position, and by a long shot. He is.
I’m also not saying that he shouldn’t be allowed to maximize his value and make as much as he can in what is typically a very short window for running backs.
What I am saying is that I don’t buy his “best RB and #2 WR” sales pitch. He’s an incredibly talented all-purpose running back, but he’s not a wide receiver and paying for two positions is something the Steelers are never going to do anyway.

My instinct is that Bell has decided that there isn’t much downside to playing on the franchise tag this year if he and the Steelers again, can’t come to terms on a long term deal. But, that all hinges on Bell staying healthy and productive. Put simply, I expect Bell to keep his word and again bet on himself.
• If the Steelers were to decide to use the franchise tag on Bell again in 2019, they would have to give him a 44% raise over his 2018 salary or the quarterback franchise tag value, whichever is higher. That will come in at about $25 million, maybe more. I won’t bother doing the math. It isn’t going to happen.
• If he signs a mega contract with some team desperate for marquee talent, like say the Jets. He will have a 3 year take of at least $50 million between the $26.664 million he made from the Steelers and his first year with his new team.
• If he manages to create a bidding war for his services and gets a deal like that guaranteed 3 year deal described above, he’ll be hailed as an example of how to negotiate with NFL teams by the NFLPA and also be set for life with another opportunity to cash in at 29 years old.

There obviously is some risk there, but Bell has had major knee injuries before and come back just as good. I have to think that he believes in himself enough that he’s not concerned by that. Not to mention that the upside on betting on himself is huge.

I’m not “optimistic.” I hope that I’m wrong.