Time is ticking away people… Next Monday, July, 16th, Le’Veon Bell will either be signed to a long-term contract with the Pittsburgh Steelers or he won’t be seen on a football field until September. Sometimes silence is indeed golden. Compared to last year, this current situation has been significantly more quiet. Does this mean there is actually some movement between the two sides? I would love to think so but the reality of the entire thing keeps coming back to me and I just don’t see a long-term contract happening. What that means is that Bell will likely be rusty again as he was in the first three-four games of last season. The Steelers should, and I stress should, be much better prepared for this. With new personnel and a new offensive coordinator, it’s not quite a fair comparison but I think you get the idea. In this space next week I have a strong feeling we’ll be talking about the final year of Le’Veon Bell in Pittsburgh.

Happy 30th Birthday to Antonio Brown. Can you believe he’s 30??? Where does the time go?

In case you missed it, we are running a new ‘Nail the Number’ contest where you have a choice of prizes!! Check it out right here.

Tweet of the Day… I tweeted this yesterday. Then see below.

As yet another NFL team charges its fans for attending Training Camp, let us again give praise to our @Steelers and the great people of @MySaintVincent!!

It was reported yesterday morning that the Atlanta Falcons will become the latest team to charge fans to attend their Training Camp. Training Camps for many years were always free to fans and quite frankly they weren’t that big of a deal. When players started interacting more and things like the NFL Experience popped up, Camp became a great place to go and bring the family. As Steelers’ fans, we should never take for granted the fact that they do not charge a dime for camp. It is really the last, true connection between fans and players that doesn’t require paying or having to sell your soul. If you’ve never been to Latrobe for Camp you really need to make it a priority.

David Tepper, a former minority owner of the Steelers, officially became the owner of the Carolina Panthers yesterday. Original owner Jerry Richardson was ousted after some pretty detailed sexual harassment claims were made public. Tepper paid over TWO BILLION DOLLARS. I’m in the wrong business. 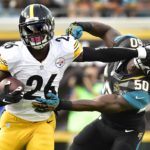