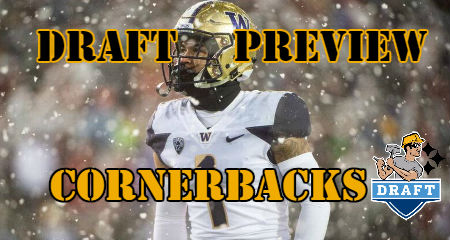 The 2019 NFL Draft is now less than a two weeks away. This year’s Draft is in Nashville, Tennessee as the NFL has decided to continue the trend of bringing the draft bonanza around the country (buckle up for Vegas in 2020). As we have done the last few years, in the weeks leading up to the Draft we will be taking a position-by-position look at the Steelers roster and where their biggest needs lie in the Draft. Last week we covered the offense and this week is the defense. Today we look at the cornerback position where the Steelers have only used 1 first round pick since 1998.

The Steelers lack of depth at the cornerback position was absolutely exposed last season. When Artie Burns proved ineffective he was benched in favor of Coty Sensabaugh. The Steelers signed Steven Nelson from the Cheifs to bolster the secondary, but there are still question marks. Joe Haden has been the best defensive back on the roster for two seasons but he has also missed time due to injuries in each of his two years in Pittsburgh. Burns is in the last year of his rookie deal and needs to bounce back after an awful 2018 campaign. Mike Hilton is a capable slot corner. Cam Sutton remains a bit of an unknown as he has had flashes of both good and bad play in his two-year career. Brian Allen has played only on special teams. Even with the swapping of Nelson for Sensabaugh, the Steelers were schematically out-matched multiple times last year when they had to line up linebackers against wide receivers. In today’s NFL, you can never have enough cornerbacks which means the Steelers must be in the market for additional secondary help.

Cornerback has been a common position targeted for the Steelers in many mock drafts this year. That being said, they have only used 1 first round pick on a corner during the Kevin Colbert era (2000-2018). That pick was Artie Burns who did not pan out. That said, the Steelers have had a number of cornerback prospects in for pre-draft visits and new defensive backs coach/defensive assistant Teryl Austin was very active on the Pro Day circuit. As mentioned above, the Steelers lack quality depth at the position and in today’s NFL where teams are running 4 WR sets and have running backs that are just as fast as wide receivers, a team can never have enough corners. Given Joe Haden’s injury history and the fact that he is in the last year of his contract, the Steelers need to have a plan for the future of the position. Drafting a corner in the early rounds as the potential #1 of the future would go a long way to shoring up the leaky secondary that allowed far too many big plays late in games last year.

LSU’s Greedy Williams, Washington’s Byron Murphy (Prospect Profile), and Georgia’s Deandre Baker are the top three corners in the class. None of them is “elite” by recent standards so it is possible that all 3 will be available when the Steelers pick at 20th overall. Both Baker and Murphy came to Pittsburgh for pre-draft visits while the Steelers met with Williams and Murphy at the Combine. Kevin Colbert and Mike Tomlin attended Pro Days at LSU and Clemson (where Trayvon Mullen (Prospect Profile) is considered a Day 2 prospect). The entire Steelers defensive staff was present at Michigan’s Pro Day which keeps David Long’s name in the conversation as a potential mid-round pick. Teryl Austin attended Pro Days at Kentucky (Lonnie Johnson), Notre Dame (Julian Love (Prospect Profile)) and Washington (Murphy). Other mid-rounders such as Michigan State’s Justin Layne (Prospect Profile), Central Michigan’s Sean Bunting, and Temple’s Rock Ya-Sin (Prospect Profile) came to Pittsburgh for pre-draft visits.