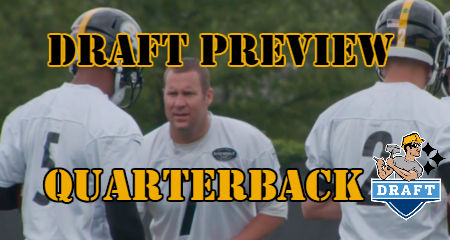 The 2019 NFL Draft is less than a month away. This year’s Draft is in Nashville, Tennessee as the NFL has decided to continue the trend of bringing the draft bonanza around the country (buckle up for Vegas in 2020). As we have done the last few years, in the weeks leading up to the Draft we will be taking a position-by-position look at the Steelers roster and where their biggest needs lie in the Draft. Today we start with the Quarterback position where the Steelers have used a pick in each of the last two years. In 2017 they selected Tennessee’s Josh Dobbs in the 4th round and last year they picked Oklahoma State’s Mason Rudolph with a third round pick acquired from Oakland in exchange for Martavis Bryant.

Also be sure to listen to a special episode of the Steel City Blitz podcast discussing the Quarterback position.

The Steelers enter 2019 with the depth chart more or less decided at Quarterback. Ben Roethlisberger will be the starter and an extension of his contact has been heavily discussed this offseason. Ben led the league in both passing attempts and passing yardage last year, but on the downside also led the league with 16 interceptions. Behind Ben, Josh Dobbs beat out Landry Jones last year in the preseason to secure the backup spot. Dobbs and third round pick Mason Rudolph will likely have a camp battle this year for the top backup role, but neither are in jeopardy of losing their spots on the roster. Brogan Roback was brought in for a pre-draft visit last season and signed in the offseason to be the 4th arm in camp.

With the top three players on the depth chart set (the ordering between Dobbs and Rudolph may change), the Steelers have no need to add another quarterback at this point. They chose Rudolph with the pick they got from Oakland in the Martavis Bryant trade in the hopes that he could be groomed as the successor for Ben Roethlisberger. With a pending contract extension for Ben Roethlisberger, it seems likely that the team will burn through most of Mason Rudolph’s rookie contract with him sitting behind Ben. Dobbs is still on a relatively inexpensive rookie contract so there is minimal need for the team to draft a quarterback this year.

The Steelers do not need a quarterback this year. With Ben Roethlisberger still under contract and Mason Rudolph (who was drafted with the perception of being Ben’s eventual replacement) in the fold, the only potential need would be for a late-round flier to be used as a camp arm. The Steelers have bigger needs elsewhere so it’s unlikely they will use a pick on a quarterback. If they do, it probably won’t be until Day 3 as a guy who could replace Brogan Roback and possibly compete with Josh Dobbs for the potential #3 role. The only quarterback who had a Pro Day with a notable member of the Steelers brass present was West Virginia’s Will Grier.