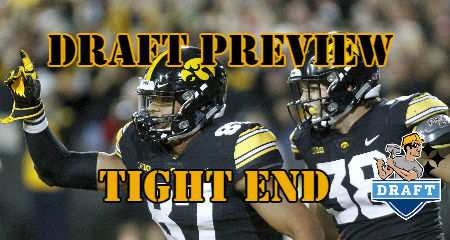 The 2019 NFL Draft is less than a month away. This year’s Draft is in Nashville, Tennessee as the NFL has decided to continue the trend of bringing the draft bonanza around the country (buckle up for Vegas in 2020). As we have done the last few years, in the weeks leading up to the Draft we will be taking a position-by-position look at the Steelers roster and where their biggest needs lie in the Draft. Today we look at the tight end position. The Steelers have not drafted a tight end since selecting Jesse James in the 5th round in 2015. James has now departed in free agency, leaving the Steelers with Vance McDonald and Xavier Grimble. There is some need here and the Steelers have spent some time scouting the mid-to-late round players at the position.

Jesse James departed in free agency, leaving the Steelers a little short on depth at the tight end position. This prompted the team to re-sign Xavier Grimble. Entering 2019, Vance McDonald is the clear #1 as long as he can avoid injury. Grimble will likely be the #2 by virtue of being the only other experienced player on the roster. The Steelers do need to add another tight end, particularly one that is capable in the blocking department. Hodges and Scotland-Williamson both spent last year on the practice squad.

The Steelers typically keep 3 tight ends which makes this an obvious position for an addition through the draft. There has been a lot of discussion over whether the Steelers would consider using their first round pick on a tight end, as they did in 2005 when they selected Heath Miller. There are some tight ends in this class that would warrant consideration at the 20th overall pick. That said, the team does have other needs which may be more pressing and could opt to go in a different direction and address tight end later in the draft. The good news is that the Steelers have a #1 tight end in Vance McDonald. Their real need here is for a blocking tight end, though the lack of one on the roster could mean more playing time for FB Roosevelt Nix.

The Steelers reportedly met with LSU’s Foster Moreau (Prospect Profile) and Missouri’s Kendall Blanton during the collegiate all-star game circuit. They also met with San Diego State’s Kahale Warring at the Combine and had Notre Dame’s Alize Mack in for a pre-draft visit. None of those players profile as early-round talents, which could be an indication the Steelers would prefer to wait until the later rounds to select a tight end. The top prospects in the class are Iowa’s Noah Fant (Prospect Profile) and TJ Hockenson (Prospect Profile). The Steelers had a presence at Texas A&M’s Pro Day where Jace Sternberger is considered one of the better tight ends in the class. Offensive coordinator Randy Fichtner was at Georgia’s Pro Day so Isaac Nauta (Prospect Profile) is another name to watch. Tight ends coach James Daniel attended Michigan’s Pro Day to check out Zach Gentry who is projected in the later rounds.