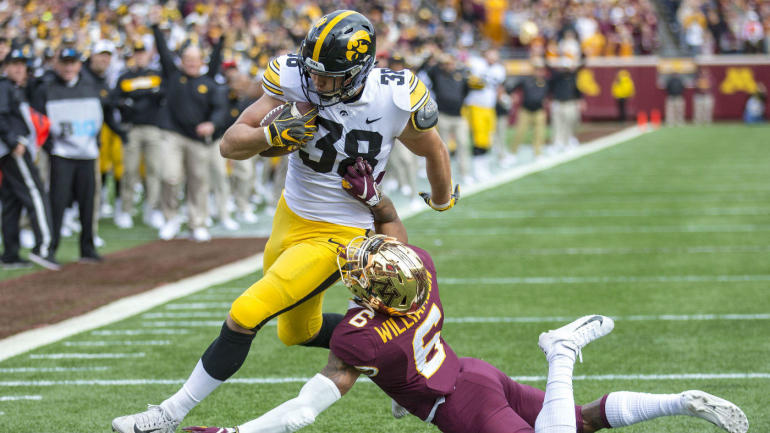 The Steelers haven’t had a true #1 tight end since Heath Miller retired, and with the pending departure of Antonio Brown, adding another dimension to the offense could be helpful. Vance McDonald has proven to be a threat when healthy, but adding another dangerous receiving weapon could help to compensate for the loss of Brown, one of the best receivers in NFL History. Today we look at T.J. Hockenson to see if he could possibly fit that role.

Physical is the word that comes to mind when watching Hockenson. He is a really well rounded player who excels at pretty much every level of his game. As a receiver, he runs smooth routes and had a fairly complex route tree at Iowa. For all his physicality, he shows a fair amount of nuance as a route runner, especially for a tight end, and he is able to create separation vs safeties by using little head fakes, though he could stand to get a little more consistent in that area. He’s got very reliable hands, and once he’s caught the ball, he offers a nice ability to make plays after the catch. He does a really good job of breaking through contact, and in the open field he is really tough to bring down.

Possibly the strongest part of Hockenson’s game though, is his ability as a blocker. Hockenson is almost like a 6th offensive linemen when asked to block, and he does not hesitate to drive people into the dirt. He regularly handles defensive lineman and linebackers in both pass protection and as a run blocker. Watching him block is an absolute pleasure, and that’s not something that can be said about many tight end prospects.

This is a rather odd one, because Hockenson does not have many weaknesses. He isn’t quite the athlete, nor does he posses the speed that his Iowa compatriot Noah Fant does, but he’s not athletically limited by any means. Hockenson is really solid at all levels of his game.

The Steelers are in a little bit of an odd spot with the tight end position. Vance McDonald is the only player currently under contract for next season, and if the Steelers decide to let Jesse James walk, then I could possibly see them addressing tight end early in the draft. Hockenson is currently being projected as a mid to late first round pick, and while I’d like to see the Steelers go with a defensive player at Pick 20, if they could net a late first or early second round pick in an Antonio Brown trade, I’d have no problem with them picking Hockenson. He is one of my favorite prospects in this draft class, and I think he has all the tools to be one of the best tight ends in the NFL.