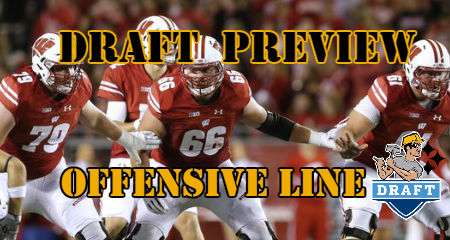 The 2019 NFL Draft is less than a month away. This year’s Draft is in Nashville, Tennessee as the NFL has decided to continue the trend of bringing the draft bonanza around the country (buckle up for Vegas in 2020). As we have done the last few years, in the weeks leading up to the Draft we will be taking a position-by-position look at the Steelers roster and where their biggest needs lie in the Draft. Today we finish off the offense with the offensive line. The biggest change on the line this offseason might be losing offensive line coach Mike Munchak to Denver, but his presence won’t be able to be replaced through the draft.

The Steelers traded away oft-injured Marcus Gilbert to Arizona for a 6th round pick. Gilbert was entering the final year of his contract and the move saved the Steelers some significant salary cap space. Reportedly, the right tackle position will be an open battle in training camp between Matt Feiler (who filled in for Gilbert for most of last year), third round pick Chuks Okorafor, Jerald Hawkins who has spent both his NFL seasons on IR, and Zach Banner. In a bit of a surprise, the Steelers re-signed Ramon Foster this offseason which likely means he will finish his career as a Steeler. Many thought that BJ Finney was the LG of the future and would step into Foster’s role but it seems that Finney will keep his spot as the top backup on the interior of the line. The Steelers also return most of their depth players in interior linemen Patrick Morris and RJ Prince who spent last year on the practice squad.

With four starters returning from last year’s team along with Matt Feiler who started most of the season at RT, the Steelers have stability along the offensive line. This is one of their lower positions of need, but given the relative state of slim offensive line depth around the league, it would not be a surprise to see the Steelers add another to the fold. Their one area to address is on the interior of the offensive line, particularly at center. BJ Finney can play center but he is better at guard, and it would do the team well to have a backup plan on the inside behind Maurkice Pouncey.

While the Steelers have minimal need to add an offensive linemen in the draft, assistant offensive line coach Adrian Klemm attended two Pro Days. Klemm was present at Pro Days for both Ohio State and Wisconsin. The Buckeyes have two draftable linemen in Isaiah Prince and Michael Jordan. Three Badgers linemen could be drafted in Beau Benzschawel, David Edwards, and Michael Deiter. Additionally, the Steelers met with Oklahoma’s Cody Ford at the Sooners Pro Day.