Enough was apparently enough for Ramon Foster and Maurkice Pouncey. They have done their very best as veteran leaders to keep things as buttoned up as possible in the wake of Antonio Brown’s childish behavior but now they’ve had enough. The same day that former Steeler Rashard Mendenhall called Ben Roethlisberger a “racist” (something he strangely recanted hours later), Foster issued a statement on social media urging former Steelers to stop airing their issues on social media and instead pick up a phone and tell the person directly. What a concept this is in the 21st century huh?!? Kudos to both Foster and Pouncey for addressing the issue. They would also get support from Ryan Shazier and then Ben got some support from former Steeler Ryan Clark. His message is one I wish was more commonly made public but Roethlisberger doesn’t want any of the fanfare even if it is positive. I’m not going to go into great detail but the amount of money that he’s raised for police K-9 units is huge. He’s paid for class trips and bussing and he typically pays the tuition for his camp for well over 100 campers each year. But we don’t see NFL Network or ESPN commenting on those things because they don’t fit the narrative of him being a bad teammate and bad guy. No, he’s not perfect, none of us are, but I’m glad Foster and Co. finally threw down the guantlet if you will. It’s yet another step towards rebuilding this locker room and this team and oh… Rashard? Go back to the hole you crawled out from.

Here’s our second Pre-Draft Mini-Podcast presented by 26shirts.com/Pittsburgh. Our first one looked at the quarterbacks in this Draft. This edition focuses on the running backs.

Here is a truth. I always say Ben is good with me & here is why. He and my son @Jclark21_ were close. When Ben was suspended he took time on a Sat morning to support Jo at his pee wee football game. He was hounded and knew that he would be, but he went because my son was his guy https://t.co/vbzJyWZD2o

Think about that. Ben was suspended at the time and still went to support a teammate’s child knowing the attention he was going to draw and still went anyway. Kudos to Clark for sharing that.

Less than two weeks to go my Steeler Friends! Last night would have been the first round of the Draft will be held. What will the Steelers have done? Traded up? Traded down? Stayed where they were? We are incredibly excited to give you the details on all of the Steelers’ Draft moves!

I think it’s incredibly important that none of us get anymore in love with Devin White or Devin Bush than we already have. Why? Because the chance that either is drafted by the Steelers is small right now. What does that mean? It means that you should be prepared for a player that isn’t an inside linebacker to be taken in round one. 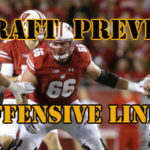