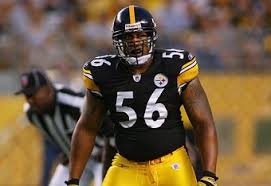 I really don’t get a whole lot of enjoyment for riding a guy but I feel like I don’t have any other choice when it comes to Steelers’ linebacker LaMarr Woodley.

Woodley will miss his second straight game as he deals with a calf injury.

Now in his seventh NFL season, Woodley has yet to play in all 16 regular season games since 2010.

It was the following summer of 2011 that Woodley signed a six-year deal worth $61 million with the Steelers.

Since that signing, Woodley has played in 32 of 41 games and has a total of 18 sacks. We all have different expectations for players based upon their position but I know I’m not alone in thinking that these numbers are not worth a $61 million deal.

The Steelers are in the midst of a series of ‘must-win’ games should they want any shot at a playoff berth. Not having your best players on the field hurts those chances significantly.

I realize Woodley doesn’t want to be hurt anymore than we want him to be but he needs to be one of those guys on the field with so much at stake.

Unfortunately that won’t be the case again this week.

Steelers, Browns Match-Up Likely to Come Down to Turnovers

Mendenhall Wasn’t the Only One Who Didn’t...

Diamonds in the Rough Could Make Difference...