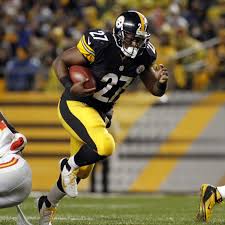 With the announcement earlier today that Pittsburgh Steelers rookie running back Le’Veon Bell is out for six weeks with a lisfranc injury, an infamous term from last season has reared its’ ugly head again.

As Bell sits, the backfield looks eerily similar to the one that struggled mightily last year. Only this time Chris Rainey is gone and in his place is LaRod Stephens-Howling which I see as an upgrade. Will the Steelers be forced to return to a “Running back by Committee?” For my sanity and yours, let’s hope not.

I actually think this time around will be different. Jonathan Dwyer has shown enough glimpses to be declared the starting back in Bell’s absence. I see Isaac Redman being the short yardage and goal line back while Stephens-Howling will become the third down and change of pace back.

I know what you’re thinking. Isn’t that still a running back by committee approach? In some ways yes, but I see this season being much more defined than last year was. I don’t anticipate seeing four different backs carry the ball in one quarter as happened in Cleveland last year.

Dwyer claims and looks to be in his best-ever shape so lets let him prove it. Put the load on him the first couple of weeks of the regular season and see how he responds. Either way I think you’ll see heavy doses of the Todd Haley short passing game which are essentially long handoffs anyway.

Regardless, this is the opportunity that Dwyer has longed for and I say give him the chance to prove me and others wrong. Lets see if he can really be the back to carry this offense.

Steelers’ Haley Off to Arizona? Don’t Be...

I don’t dread Dweyer in the starting i still thinks he is the best RB at this time. He deserver the starting spot anyway. I now we got a shiny new toy, but we can’t overreact, if he ran behind are line last year you would be ready to put Bell on the first bus out of here. The whole offense was outta sync last year, the line was bad. Dweyer and Redman came in in great shape too this year, so they should both get the chance, and if Bell comes around it’s just more fire power. In my opinion Stephen Howlin will be the X-factor, watch out.

I agree James. I think LSH is a significant upgrade over Chris Rainey and will be a very valuable weapon if used right. I don’t believe Arizona ever quite found the proper way to use his skills so I’m hoping that Haley will.